I am not your sister, mother or wife; I carry my own identity 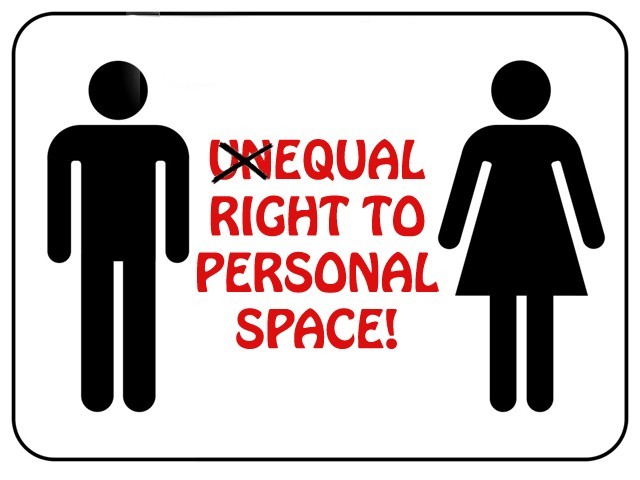 He stared at me, then brushed against me. I could not tolerate such a violation of my personal space. DESIGN: AREEBA KAMAL

Ripley’s believe it or not (the Pakistani version)

A woman physically attacked a man in a restaurant because he intruded her personal space. She tried to make him back down. There was a sense of injustice that spurred this violence because she wanted to drive home the fact that she has the same claim to her personal space as he did to his, both in public and private domains. She too is a human being and her claim to her space remains valid regardless of her gender.

It turns out the concept of being human is elusive, almost faded beyond recognition because the idea of gender classification is too deep-rooted.

The person in the above narrative is me.

I am a woman and if for some reason I happen to be treated like a respected human, I am expected to react in surprised gratitude. Because, really, if I walk into a coffee shop after midnight with a man who is a friend, I don’t fit the cookie cutter template of being someone’s wife or sister. But then, we are progressive now so even if the man accompanying me is my boyfriend, I will not be questioned.

Since he was neither and I was the only woman in the room, I was beyond being labelled.

Hence I am up for grabs – in this situation literally.

I am used to both men and women turning when I walk into a space. It’s flattering mostly, and in all honesty, if no one did, I would be offended. They turn and stare, but then they stop. This time, however, one man turned around and refused to go back to what he was doing. He kept staring; I gave him time, until it started to bother me.

I did however finish my coffee and dessert, a much needed intervention after a long work day. As I started to walk out, the same man brushed against me.

I reacted in a very un-lady-like fashion verbally at first; I asked him if he was missing his mother.

I said this because I wanted him to realise that I too am a woman as sacred as his mother would have been; my honour is equal.

He was taken aback and lashed out with a choice insult involving my anatomy.

That’s when I physically attacked him. And I didn’t back down, even after the initial shock of those around me faded, and they tried to stop me.

It was not fair – that’s what my premise was.

Eventually, I had to be dragged out. One of his friends followed and asked me to calm down since I was like ‘his sister’.  At this point, my temper soared again and I told him that I refuse to be associated as anyone’s sister, mother or wife because I am none of those – I carry my own dignity.

When I narrate this incident most people find it either an exaggeration or they start to lecture me against doing something of this sort again.

I probably will, however, because there is a strong sense of injustice here punctuated by the fact that my honour is defined by that of a man accompanying; both of these realities are things I will never agree with.

That evening, I walked out with some bruises but my pride was intact.

He probably went home confused though, with whatever scars I had inflicted.