An open letter to Lee’s killers. This is not what Islam taught us 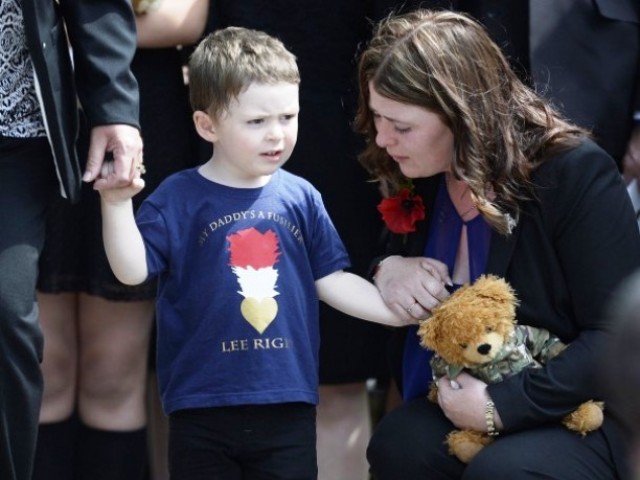 Jack and Rebecca Rigby, the son and wife of Lee Rigby. PHOTO: REUTERS

This is an open letter to both of you on behalf of Muslims who are disgusted at your barbaric actions at Woolwich. And also because you both tried to justify what you did under the name of Islam.

It has been over 50 days since you butchered and beheaded an innocent man in the streets of London. Today was Lee Rigby’s funeral and like many people killed in Afghanistan and Pakistan, he left behind a wife and young child.

Lee was collecting money for a charity that helps injured soldiers and you killed him in broad daylight.

“An eye for an eye, a tooth for a tooth. By Allah, we swear by the almighty Allah we will never stop fighting you until you leave us alone.”

I, like many others are embarrassed that you claim to be a Muslim, for Islam means peace and Allah would never justify your heinous crimes. If you were a Muslim then you would know that an eye for an eye would make the whole world blind.

When George Bush and Tony Blair launched their illegal wars in Iraq and Afghanistan, I took to the streets of Britain to protest. After ten years of bloodshed in Iraq, Afghanistan and now Pakistan, I am still opposed to British soldiers risking their lives in a conflict that was started by their puppet leaders. Does that mean I should start killing every off-duty soldier I see out of spite?

When British soldiers have their legs blown off by a Taliban landmine, or come back coffins, does that mean you should gleefully justify it? Are these people not human beings to you both?

Did you both know that since you murdered 25-year-old Lee, Muslims and mosques have been attacked all over the UK? Rotten pigs’ heads are thrown into the gardens of peoples’ houses. Muslim graves have been desecrated. Women have been attacked and had their hijabs torn off. Swastikas and “EDL” have been scrawled over Islamic centres across England. Are you happy with the outcome?

You both gave far right fascist groups such as the EDL (English Defence League) more attention so they can spread violence and bigotry towards Muslims.

Over 1.6 billion Muslims have been branded as angry terrorists by the ignorant masses because of people like you. Muslims from all races and backgrounds have coexisted with others peacefully for decades and multiculturalism is a large part of British identity. We will never stop this despite what you did.

I have always been taught to respect others regardless if they are atheist, Jewish, Hindu, green, pink or blue. Clearly you Mr Adebowale and Mr Adebolajo didn’t get that message. So I’m going to say it clearly.

The Quran teaches us to respect all people.

Islam isn’t just a religion, it’s a way of life and that will always start with peace.