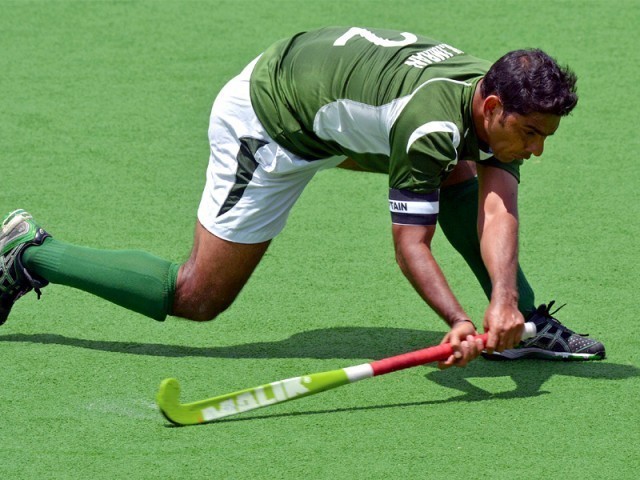 A 24-year victory drought at Asia Cup has to be broken for Pakistan to book a place in Hague. PHOTO: AFP/FILE

This will be a stern test as Pakistan will face competition from Asian powerhouses in the form of India, South Korea and Malaysia, who all interestingly are vying for a place in World Cup as they have failed to yet qualify through World Hockey League Tournament.

According to the new qualification format for the World Cup Hockey Tournament 2014, the 12 positions will be filled by the hosts (Netherlands), five continental champions (Africa, Americas, Asia, Europe and Oceania) and the top three teams from each of the two World Hockey League semi-finals held recently in Holland and Malaysia.

Pakistan have tasted success at the Asian level field hockey competitions in the recent past as the green shirts won the Asian Games hockey competition in 2010 and the Asian Champions Trophy in 2012. Despite this, they will be under pressure to perform well and win the Asia Cup in Malaysia. The three main areas of improvement for the green shirts are fitness levels, defence and penalty corner conversion rates.

During the World Hockey League semi-final tournament, the display of the Pakistani hockey team can be characterised as inconsistent. They displayed flashes of utter brilliance and made the hockey aficionados in the country remember the golden era of the game in Pakistan, but unfortunately these periods of brilliance were like an oasis in a desert of erratic hockey. The main reason for this inconsistent performance is the poor fitness levels of the players.

In addition, penalty corners account for majority of the goals in modern hockey so the penalty corner conversion rates can be the difference between two evenly matched teams. It was heartening to see the green shirts successfully trying indirect routines in Malaysia, which is a rarity especially under the helm of Pakistani coaches, but still Pakistan needs a prolific penalty corner drag flicker.

The lead drag flicker, Mohammad Imran, does not have as high a conversion rate as his European counterparts. Also, the alternative drag flick options in the form of Irfan, Tauseeq and Ateeq need more grooming and experience to deliver the goods on a world stage. I think the team management should consider recalling Imran Warsi who has been scoring highly in the Russian League but has unfortunately disappeared from the national squad in the last few years which is shocking as he was always tipped as the ideal replacement to Sohail Abbas.

Defence has been a chronic problem for the green shirts. The Pakistani defence line consists of 2-3 main defenders, so it has been a persistent problem that the mid-fielders and forwards need to be more active in their defensive duties and also work on improving their defensive skills.

Two more problems were apparent in the defence in Malaysia, firstly there was confusion over the first choice goalkeeper in the team and secondly, Pakistan conceded a lot of goals from penalty corners so the defensive structure for these routines needs to worked upon before flying to Malaysia for the Asia Cup.

Overall, I feel India start as the favourites to win the Asia Cup with close competition from burgeoning Malaysia and the ever green South Korea. Pakistan does have an outside chance in my view only if they play to their potential, otherwise, they might end up finishing even outside the top three positions in the tournament.

A 24-year victory drought at Asia Cup has to be broken for Pakistan to book a place in Hague.