Injustice for Dr Aafia once again 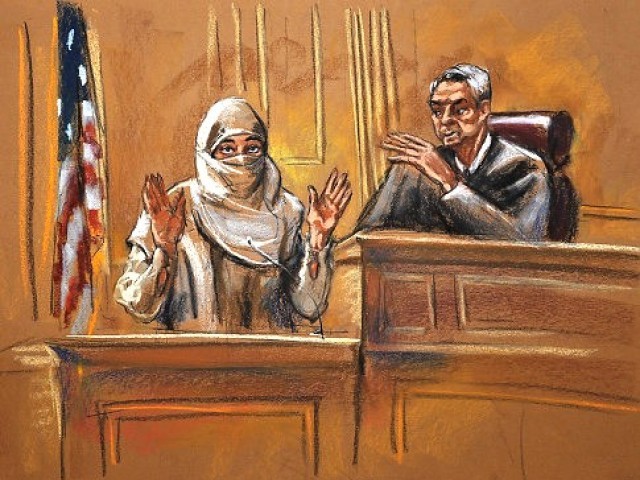 The nickname given to her by the American media ‘Lady Qaeda’ was totally uncalled for and must have influenced the jury.

I cannot express how disappointed I am at the sentence that Dr Aafia Siddiqui received.

She did not deserve to be convicted at all – if one looks carefully at the testimonies of key witnesses. There are also questions about the legitimacy of how she was picked up, but without even addressing these issues, I would just like to talk about the initial case and verdict which was given earlier this year.

During the case an FBI firearms expert had expressed doubts whether the M-4 rifle, which was allegedly grabbed by the Pakistani neuroscientist to attack US interrogators in Afghanistan, was ever fired at the crime scene. Carlo Rosati, the expert who testified in a federal court, said he had thoroughly examined the weapon, the curtain from a room of Ghazni police station where the shooting incident took place and the debris of its wall where two bullets reportedly hit, but found no evidence that gunshots are supposed to leave.

Pointedly asked by Charles Swift, the lead defence lawyer, if he was certain the M-4 rifle was ever fired at the crime scene, Rosati said he could not say that with absolute certainty.

In his testimony on  the fourth day of Dr Siddiqui’s trial, the same firearms expert said there was no gunshot residue on the curtain behind which Aafia was stated to be sitting, nor did he find any projectiles or fragments from the part of the bullet-hit wall built with stones and hard mud.

An FBI forensic expert also confirmed that he found no fingerprints of Aafia Siddiqui on the M-4 rifle when the weapon was produced in the court.

Regardless of what went on in the international media, it should be made clear that Dr Aafia has never been charged with terrorism. Rather, she is charged with snatching a US warrant officer’s rifle in mid-2008 while she was detained for questioning in Afghanistan’s Ghazni province and firing it at FBI agents and military personnel. However, none of the personnel were hit. Hence the nickname given to her by the American media ‘Lady al-Qaeda’was totally uncalled for and must have influenced the jury.

What is sad is that being such a core ally of the United States in the war against terror, our government has been able to achieve nothing in this regard, and the treatment a Pakistani citizen has received is just appalling.

Today our foreign ministry spokesman Abdul Basit told AFP that we are continuing efforts to get Dr Aafia repatriated to Pakistan and our Prime Minister has said that he would urge the Americans to return Aafia in place of more assistance as that will improve America’s image more in the eyes of the people of Pakistan. I have my fingers crossed and I hope that this ploy works.

If an FBI forensic expert confirmed that there were no fingerprints on the alleged rifle, and a firearms expert testified that he cannot be sure if a rifle was fired in the alleged incident, how can the jury return a guilty verdict when the burden of proof lies with the prosecution to prove beyond reasonable doubt that she fired the gun?

To me, it seems, Aafia was convicted beforehand and the burden of proof was placed on the defence. The nickname ‘Lady al-Qaeda’ is a testament to that.

Terrorists who kill innocent people should be sent to the gallows but the search for revenge should not be turned into a witch-hunt.