Ibrahim Hyderi: Where children chew gutka and await their turn to eat 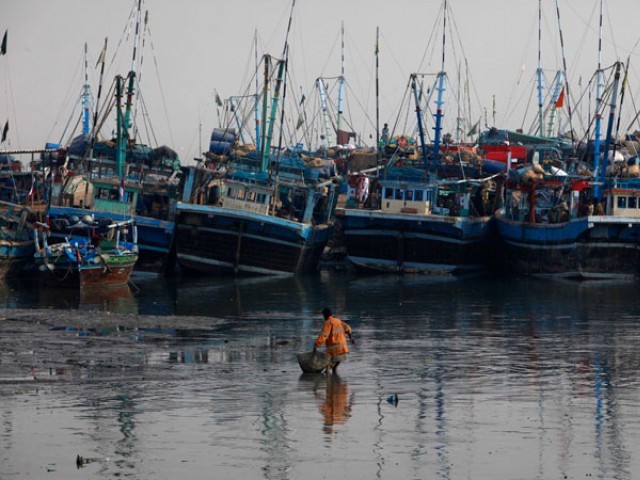 To live in Ibrahim Hyderi is to either die or be buried alive by the forsaken nature of your existence. PHOTO: REUTERS.

From the foul and putrid smell that contaminates the air to the alleys upon alleys of shanty mud erections, this 4,000 year old basti (town) will leave you despondent. It has been deserted by the government, abandoned of literacy and polluted with all forms of abuse: child, drug and health. Its inhabitants lead a very dismal existence indeed.

This crumbling and dilapidated town is home to a staggering 50,000 Pakistanis.

As the rocking waves settle against the sweltering sun, a string of fishermen’s boats line the docks. The effortless beauty is deceiving for while Mother Nature may majestically rock against the shores she has all but deserted those who call this basti their home. Uneducated women live out their lives with meagre employments and too many children until they succumb to the overwhelming demands made of them. Their fate: either another statistic for maternal mortality or barely surviving to see their children stuck in the same cycle of poverty that has destroyed them. To live here is to either die or be buried alive by the forsaken nature of their existence.

The strong stench of fish feed coming from the adjacent factories envelopes the air that surrounds them. Children prowl the streets chewing on ghutka, waiting until they become eligible for child labour. If you look carefully, you will find barely lit sweatshops hosting children who sit weaving carpets in the sweltering heat. These nimble hands are home to bright minds yet unjustly deprived of their right to be within the more colourful walls of a classroom. The classrooms here are another disheartening circumstance. For the scanty number of children who attend school, there is an absence of teachers, resources and proper sanitation. It is unsurprising that this poor quality of academic learning does not allow its pupils to break free from the shackles of stagnancy that have imprisoned this basti for centuries.

How can one be expected to achieve progress without awareness?

How can this basti be expected to move forward from its unfulfilling fishing livelihood and the same ghutka paans if its inhabitants are blithely unaware of their basic rights as human beings?

Fathers do not know that it is an injustice for them to force their sons into labour instead of sending them to school as they themselves were never educated at school. Mothers have never known a life beyond rearing children and caring for their houses day after day after day. And the children? A community health worker sadly recounts the story of a child who felt faintish at school because it was not her turn to eat in the morning.

This is their reality.

One cannot help but wonder: what is the impetus that arms humans with desire and hope?

A phenomenon that has not found a home in this age-old basti. Here, amidst the tiny paan shops, the weaving children and the disgusting stench of fish feed, education is unwelcome. Governments have come and gone, martial coups have ruled and dictated and yet everybody ignored Ibrahim Hyderi. No initiative has ever been taken to decrease the staggeringly high percentage of child labour and no money has been invested to develop the uninspiring government school that lurks in a dirty corner. As you leave, you will not miss the MQM banners or the ANP signs and the driver will not forget to inform you that you are making your way through ‘Benazir Chowk’. And as if a bad joke was turning sour, on the outskirts of this basti is a wall with a prominent ‘PTI’ painted over it. So much for jazba (fervour).

Where is the ‘roti, kapra, makaan’ (food, clothing, shelter) for the girls who are dying of anaemia after delivering children they are too young to carry?

Where is the ‘tsunami’ and the promise of inqilaab (revolution) for the young boys who fish instead of playing cricket on their streets?

Where are the haq-parast (worshippers of truth) when the people of this basti are so deprived of their basic rights that they are unaware of their right to possess them?

“We all suffer in our different ways from being prisoners of birth.”

One can only wonder- what did the people of Ibrahim Hyderi do to suffer this existence?

And then comes the sinking reality. This basti is so oppressed by life and its leaders that it is hopelessly unaware of a world without these sufferings.

Born and raised in Karachi, Ayesha is a sophomore at Smith College, USA. She tweets @ayeshasadafkha1 twitter.com/AyeshaSadafKha1