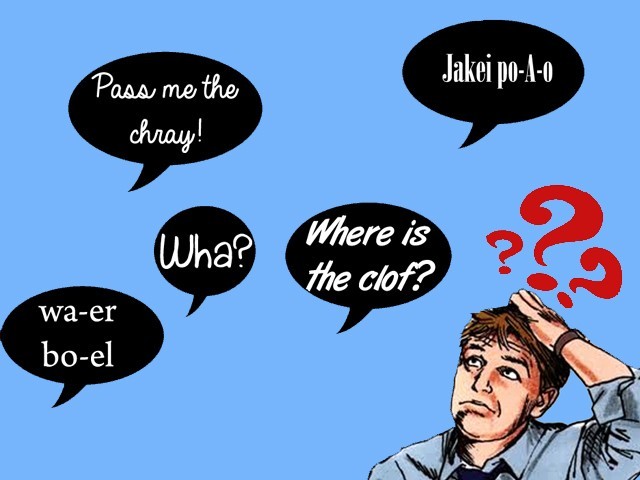 Words such as ‘bottle’ become ‘bo—el’ and water become ‘wa—er.'

One day, on our way home from school, my son asked me why English boys pronounce jacket potato as ‘jakei po-A-o.’ I didn’t have an appropriate, grammatical explanation for this very rational question. However, what I do know now is that north east England is famous for its English accent and is commonly referred to as the “drop T area”.

Locals here conveniently forget to pronounce the alphabet ‘T’ while conversing. So, words such as ‘bottle’ become ‘bo—el’ and water become ‘wa—er’. Albeit, this might sound entertaining and funny, it can be a real nuisance for immigrants like myself.

When I moved to north east Yorkshire, I found it hard to communicate with the locals because I was unaware of the whole dropping T act. Often, I found myself caught between trying to make people understand what I was saying or trying to make sense of what they had to say. English, which came to me fluently, was now my biggest weakness.

I recall a few incidents that made me learn this the hard way. In my early days, when I was still getting used to the area, its people and the language, I started work at a nearby supermarket. One day, a customer asked me where the ‘bu-Aa’ was located. I had no idea what he was talking about so I politely apologised and asked again. This time he sounded a bit agitated as he said,

Now, this doesn’t mean that the locals don’t pronounce the alphabet “T” at all. They do with some words such as ‘time’, ‘today’, ‘tomorrow’, ‘telephone;’ basically words with the perfect “T” sound.

Furthermore, the “T” alphabet problem doesn’t end here. One day while working at a restaurant, my manager asked me to get her a ‘chray’ from the table. I went to the table and looked around the table for the ‘chray’ but couldn’t find it. I thought I might have heard the wrong word so I decided to go back and ask her again. She sounded a bit frustrated as she yelled,

“CHRAY PLEASE” pointing towards the table.

I still didn’t understand. I just pretended to be busy. She walked straight up to me, gave me a weird look and grabbed a tray that was lying on the table.

After a few days, she asked me to get her a ‘clof’. I was again unable to find the ‘clof’, which was apparently placed on the cupboard, right next to where I was sitting. The manager took this issue up with the owner of the restaurant and this led to me getting fired on the basis of my poor understanding of the English language. Yup! It got that serious.

Before moving on to my next encounter, let me give you a brief explanation about other locals who substitute the alphabet T for the ‘cha’ sound. For example, tray is ‘chray’, ‘chru’ is true, train is ‘chrain’ and tube is ‘chube’. How in the world was I supposed to know this is beyond me!

Moreover, the trouble “T” alphabet in some cases doesn’t make the expected sound when it joins alphabet “H” together like “Th” normally should make (da/th) sound but gives an ample headache to the newcomers when “Th” (da/th) sound turns to soft “F” (f) sound in north-east Yorkshire e.g. “clof” means “cloth”, “baf” (bath), “nuffin” (nothing) etc.

Moving on, after completing my Masters degree in Education, I found a teaching job in a local community centre where I had to teach English to new immigrants. This was quite a challenging task as the students would find it hard to adjust between my pronunciation and that of the locals.

One day while teaching, one of my students intercepted the lesson and tried to correct me for pronouncing the word, ‘true’, incorrectly. According to her it was ‘chru’. In her defence, her English teacher at her college pronounced true as chru and she was a local while I wasn’t.

Besides the new immigrants, international students often struggle to communicate with the locals due to the different style of English language spoken in north east Yorkshire. Even with a good background of English language, one needs at least six months to understand the unique style of the ‘drop T English.’

However, on the bright side, after having spent a chunk of my life in north east Yorkshire, I feel at ease with the local English. Just a few Ts dropped and a few ‘chas’ added- life is easy!

Conclusively, a survey conducted by MSN UK News on UK’s best-loved accent puts the Yorkshire accent on fourth place for being one of the most famous accents in UK.

I know picking up different dialects can be difficult so I hope this post helps all those ‘chrying’ to grasp the drop T dialect and makes you realise that you are neither alone nor stupid.