Breaking the Curfew since 1989 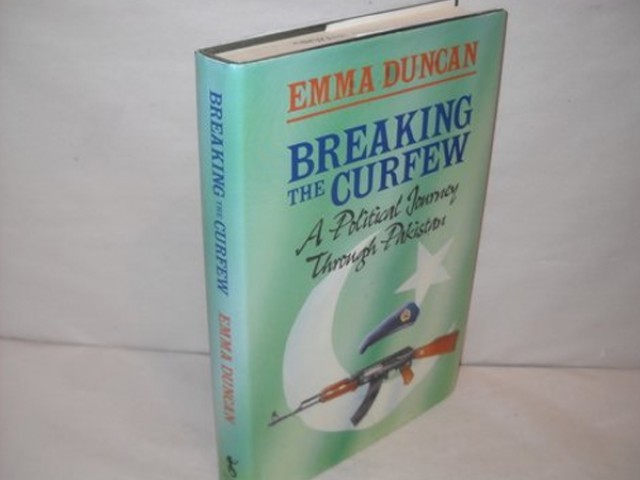 I had been meaning to read the book for a while and couldn’t put it down after I had been through the first few pages. PHOTO: AMAZON

“Respect for law is dying. The whole system of justice is breaking down… nobody wants a good police force as then, they would become subject to the law”.

This is Karachi in the 1980s, as described by a senior police official in the book, Breaking the Curfew, published in 1989. It was written by Emma Duncan, a journalist for The Economist, during her escapade to Pakistan in the late ‘80s.

The Karachi sketched in the book, when compared to the Karachi of today, sounds more like Zurich, as our elders recall. The saddest part is that the symptoms were there for all to see even then, yet no one called the doctor. And they still haven’t. The city’s problems are, more or less, the same. They’ve just multiplied exponentially and one must agree that if not the whole country, then Karachi, at least, has descended into chaos.

Around 2,300 people were reportedly killed in targeted-killings and other crimes in 2013, which included more than 100 police officials. Last year’s tally stood at a horrific 2909. And this year is likely to be record-breaking yet again. The horrific ethnic and sectarian strife presently plaguing Karachi is predicted towards the end of the book, when the writer observes “a different set of cracks appearing all over the country, especially in Karachi”  as one’s ethnicity and religion take precedence over everything else, and terms it “a result of the failure of nation-building”.

I had been meaning to read the book for a while and could not put it down after I had been through the first few pages, as it seemed to describe today’s Pakistan rather than the one that existed more than two decades ago.

The writer has divided the book into chapters each for the important sections of society: Businessmen, Landlords, Tribal Chiefs, Urban Upstarts, Politicians, Religious Leaders, Civil Servants, and Soldiers, among a few others.

The state of affairs reflected in Duncan’s narrative is startling and upsetting, as it seems as if nothing has changed for the better. After reading the 300 pages, I realised that things have been dismal for a long time now and was amazed to know at how we’ve stomached this wretched state of affairs for this long.

Duncan describes a Pakistan where ‘connections’ mean everything while corruption, lawlessness and nepotism are rampant. Where the ‘new (mostly illegal) money’ lot can be gauged by their fleet of Land Cruisers, palatial houses and armed guards and where the courts are completely non-functional and people cast their vote to whomever can protect them and grant them the most favours.

Duncan reveals a reprehensible system; one that serves the powerful and has been adjusted to buy the poor and middle classes as the status quo.

Assessing the functioning of politics, especially tribal politics, she outlines the pursuit of power, rather than the amassing of wealth, as the primary reason for winning elections and sitting in the government, saying,

“One of the ways of generating support is to be able to hand out jobs and opportunities for making money – that favours business. The politician and the constituent are the beneficiaries of that system: good government is often the victim”.

I think every Pakistani who is a tad aware of politics in our country can vouch for that testimony, the only bolt being that this was diagnosed decades ago.

The kind of jungle that our country has become is a transformation that takes years and years. Looking over the horizon, one can see everything but the state. For those who can afford the generators, tankers and cylinders have replaced electricity, water and gas shortages and the absence of police protection has led to CCTV cameras, private security guards and barbed wires.

Commenting on the same in the ‘80s, Duncan terms it as “the ultimate failure of a State: an inability to protect its citizens”. That failure, detected by her in the ‘80s, is an absolute reality now.

An army officer, while talking to the author, admitted that military rule is as bad as democracy if it isn’t supplemented by economic reforms.

“What the country needs is a good leader. It hasn’t had one since Jinnah.”

And almost 30 years later, we are yet to find that leader.

As a maiden voter, I was optimistic about the elections and casting the ballot in 2013, never mind the mismanagement and confusion at the polling booth and vulnerability of ECP staff in most of the areas.

Even Duncan ends her book on a positive note, hoping that continued democracy may turn the system around. I just hope that we still have time to make amends.

A sub-editor for the City Desk, Islamabad at The Express Tribune

Is Pakistan and China's friendship really that strong?