‘Halal’ education in Pakistan: When ‘pig’ in a nursery rhyme is taboo 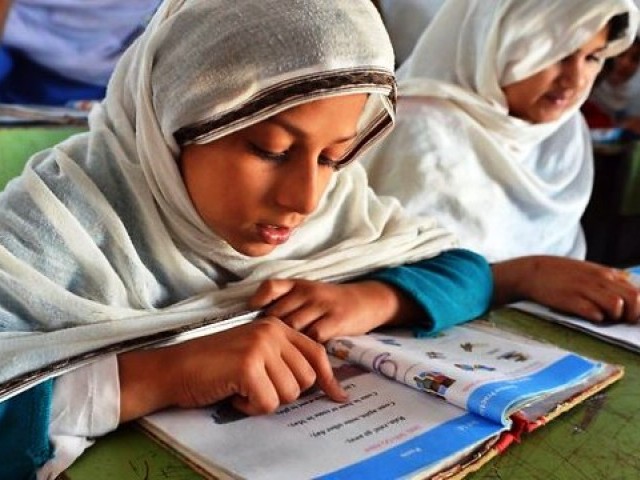 My students, daughters of thela wallahs, cooks, tailors, have as much of an uphill task as any Jill getting permission to study. PHOTO: AFP

As certain words and concepts in English are out of their range of experience, my students, coming from an underprivileged background, find it difficult to understand or accept them. With English nursery rhymes for example, since Jack was remiss enough to break his crown, the girls thought he and Jill were king and queen, until I explained otherwise.

Humpty Dumpty on the other hand continues to be viewed with deep distrust, however much I pleaded his cause. It isn’t, after all, normal to be an egg person. The resultant doubt of his being quite kosher creates a degree of disquiet. If ever Humpty wanders into our class my students, far from being delighted, would inch as far away from him as possible.

Nevertheless, nursery rhymes (once you’ve explained egg people and cows jumping over the moon) are useful and interesting teaching aids, generating discussion on a basic level with questions like, ‘Who is this poem about?’ or ‘Where are Jack and Jill going?’

Or, if you’re teaching tenses: ‘Who was this poem about?’ and ‘Where were Jack and Jill going?’

My students, daughters of thela wallas, cooks, tailors, have as much of an uphill task as any Jill getting permission to study, and run as much risk of breaking their crowns in their domestic lives, as Jack.

There’s Zareena, whose father threatens to remove her from school any time she displays initiative such as cooking at a neighbour’s house when there was no gas at home.

There’s Maria, whose father routinely beats her mother, who beats the oldest sister, who beats Maria… who is allowed to study only to spite her father’s sister, whose children are not similarly permitted by their father. Maria attends wearing a black abaya and scarf even at this all girls’ school, in the heat at times in the mid thirties in an un-air-conditioned environment.

So yes, one tries to make no waves because sensibilities are easily dented in Zareena and Maria’s community. Unfortunately, it takes only a tiny wavelet to rock the boat.

I thought I had all bases covered; Jack and Jill, being sinful infidels may freely climb and fall down hills and break their crowns, if that is all they do. Needless to say that the variation on the theme ‘I don’t know what they did up there, but they came down with a daughter’ would not be discussed in this class.

I reckoned without little piggy.

By the time we collectively arrived at the stage of detesting the words ‘past’, ‘present’ and ‘future’, both perfect or continuous, the class began getting the hang of tenses. It was time to move on to singular and plural.

Since the closest to a number rhyme in Urdu ‘Aik tha raja, aik thi rani, dono mar gaye, khatam kahani,’ (there was one king, and one queen, both of them died, and that’s the end of the story) is not very helpful, and mine is an English class anyway, I settled on the five little piggies to teach about one or more of a given thing.

Which piggy went to market? How many piggies were there in all? If each pig ate one loaf, how many loaves did he buy?

Note the ‘loaves’ cunningly placed in the same sentence, with ‘loaf’, plural and singular with a vengeance.

A pall hung over the class. I presumed it was the heat, and it was a singularly hot day; the girls were muffled in headscarves and coats and other trailing and stifling things.  I took a sip of water.

“The first little piggy went to market.  How many piggies were there in all?”

The silence in the class was palpable.

“Come on, girls! The first little piggy went to market, the second one stayed at home… look, it’s right here on the board. How many piggies were there in all? Tell me.”

The class remained unusually obtuse, and I didn’t understand it, until the following day when Zareena’s father arrived at the school, and this time the transgressor was not Zareena.

We had a talk, the director and I, and an incontrovertible fact emerged: animals, real or imaginary, were divided into two categories: halal or those that must not be named’… and pigs belonged to the latter so they must never be mentioned.

This batch of girls has since learnt singular and plural using down to earth cats (dogs verge perilously on the edge, as ‘those that must not be named); but for the next batch, piggy is set to become Mickey. So: this little Mickey went to market, this little Mickey stayed at home.

Zareena’s education depends on such things, or else she too stays at home, like the second little Pi…er…Mickey.

Some things hang by an awfully slender thread.