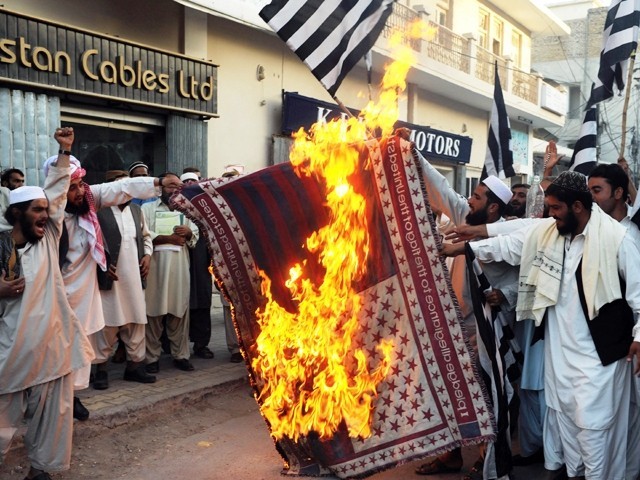 The US intends to cause havoc in the Muslim world by instigating them to come out on the streets and vent their anger by burning and breaking vehicles and property.

The conviction of Pakistani neuroscientist Dr Aafia Siddiqui should be seen through the prism of the dark plot hatched by certain elements in the West against Islam and its adherents. How else can one explain the 86-year sentence on seven counts that Dr Aafia received?

The West knows that the sentence given to Dr Aafia will cause massive disappointment in the Muslim world. There will be protests, there will be riots and much more ‘spice’ which the western media is looking for.

The US has saved itself from a universal insult and the tag of hypocrisy by sentencing Dr Aafia. Had the US freed her of all charges, the labels of ‘terrorists’ and ‘extremists’ would have had a huge, ripped hole in them.

The world, which believes the US to be right in its fight against terrorism, would have seen the real face of its hypocrisy and twisted facts.

The fact that Aafia was kept in jail for so long and eventually given this sentence clearly indicates what the US is intending to do. I fear it is trying to cause havoc in the Muslim world by instigating them to come out on the streets and vent their anger by burning and detroying vehicles and property. The rest is left to the western media to portray Muslims as aggressive, violent, intolerant and extreme.

To be honest, I wouldn’t be too surprised if I woke up one morning and heard that the 9/11 incident is repeating itself, with the same victims and the same planners.

The US plan is brilliant. Anyone with a brain can see the strategy behind it. A major terrorist attack happens and the Muslims would be blamed again – because they have every reason to be blamed. At least thats the story according to the according to the US and the biased western media.

Is it only me? Does someone out there thinks the same?

It took Muslims years to regain their dignity, to come out of the shell that was built around them after 9/11. Although we haven’t been able to break through completely, things aren’t as bad as they were right after 9/11.

We have managed to thin down the thick dust, which was literally thrown at us, but it could grow thick again. Muslims could be facing another strategic attack.

A psychology student and a student ambassador at the University of West of Scotland. She is interested in humanitarian issues.

Demand justice for the Sialkot brothers - Manchester did

Didn’t you know everyone hated you?