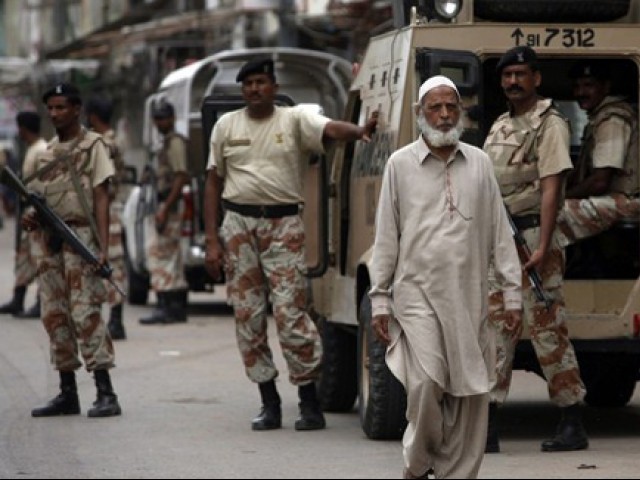 How long will citizens live in fear of men carrying guns on the streets?

Increasing the powers of the para-military troops to police Karachi is supposed to help control the law and order situation. But has it? Ever since 1993, when the Rangers became a visible force in the city, what have they really achieved?

Political forces have awarded Rangers funds and powers which seem to allow then to get away with committing crimes instead of preventing them. Many in the city believe that Rangers go unpunished because of their position. They are superior in rank to the Police and just below that of the Army. But in Karachi, they are supposed to be working under the local police.

Ideally, the Rangers should be protecting our borders near Afghanistan, Iran and India. But here they are in the cities, occupying state buildings for both their residences and offices.

So far no democratic government has been able function without Rangers. Surprisingly, whenever a government’s term in the city is due for renewal, the law and order situation mysteriously deteriorates to provide a valid reason for their extension.

How long will the people of this city fear Rangers with sub machine guns installed on their vehicles as they patrol and stop citizens at will?

One reason for the lack of quality policing by the Rangers in Karachi is because officers do not hail from the urban areas. They have limited training and are extremely disrespectful towards the citizens of urban centres who are not accustomed with their way of law enforcement.

Over the years Karachi has had its share of the atrocities including extra-judicial murders, torture, and illegal confinements orchestrated. But this city has only gone from bad to worse – despite the presence of Rangers.

Recently Federal Interior Minister Rehman Malik extended their tenure and increased their powers at a time when the city is strongly opposed to the strategies adopted by the Rangers – especially when it comes to crowd control.

It is difficult to understand how this incompetent department of law enforcement will be any better with additional powers or help control the situation or public outburst as it is clearly heading there.

The measure taken by the Interior Minister to curb sectarian tensions ignores the fact that Rangers have turned a blind eye to the growing number of terrorists in the city. Or are the Rangers supporting them only to get an extension of their contracts to stay back in the metropolis?

It would have been ideal to use the same funds to upgrade the existing police force and to have local residents who have a stake in the city participate in protecting it. This could revolutionise the police’s effectiveness and their services to protect the innocent and maintain law and order. The cost of running two policing department in one city is exorbitant on the ‘poor’ provincial government. Our police department can be revamped so that officers are empowered and motivated to counter those whom the Rangers have so far not able to control.

The hope is that we find a way to manage and not aggravate the crises this city faces on a daily basis.