Edhi: The man who dedicated his life to Pakistan 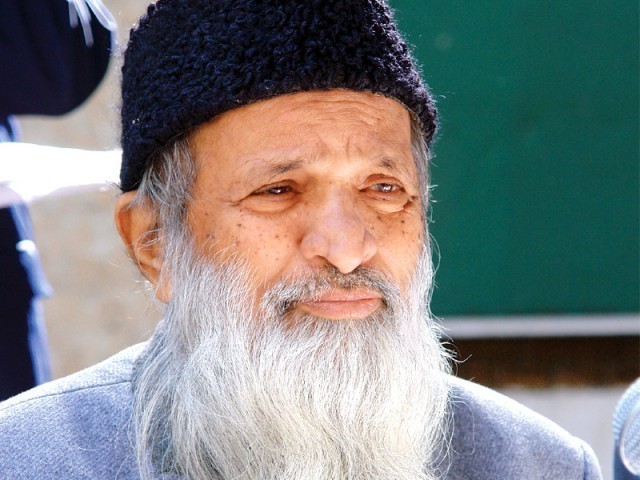 Mr Edhi has earned the respect and regard of all his colleagues and countrymen. PHOTO: FILE.

The first time I encountered Abdul Sattar Edhi was when he was present at a conference that the volunteers at the Sindh Institute of Urology and Transplantation (SIUT) had been given the privilege of hosting. The banning of organ trade was the topic under discussion. The founder of SIUT, Dr Dr. Adibul Hasan Rizvi, was adamant that such widespread practices should be proclaimed illegal in our country. He condemned organ trade, saying that instead of helping the organ sellers get rid of poverty, it trapped them further by adding expensive medications to their daily list of necessities.

The tumultuous applause that rang out when Edhi was introduced was truly memorable. Modest as ever, Edhi announced that he did not deserve such admiration as he was nothing but a ‘beggar’. However, on many occasions Edhi has clearly demonstrated that he is very much deserving of such adoration; in fact, it might not suffice even if the entire population of Pakistan rose to give him a standing ovation.

Edhi is usually present at the major events taking place at SIUT. He made an appearance at the SIUT Spring Festival, held in 2013. This festival is one which we volunteers look forward to every year and give our best effort to organise. Its preparation requires dedication and effort from us and, even more so, from our superiors. I can state with conviction that the number of people who show up to contribute, especially people like Edhi, who have no paucity of pressing demands on their time, make it absolutely worth the trouble.

Fortunately for us, the SIUT student volunteer programme was under way when the conference on organ trade was taking place and the students were permitted to attend. The highlight of our day was when we were all called to the stage to get our picture taken with the man who devoted his life to Pakistan.

Now that Edhi is facing severe kidney issues and his condition makes transplantation impossible, he will visit SIUT regularly for dialysis to improve his health. Mr Edhi has earned the respect and regard of all his colleagues and countrymen. I strongly hope that his treatment progresses smoothly and his generosity continues to enhance the state of Pakistan.

A student at the Karachi Grammar School in the 11th grade, Ghazal is interning at The Express Tribune. She enjoys reading and writing.

10 reasons why Vampire Diaries is way better than Twilight