Pakistan bleeds with Hazara blood, do you even care? 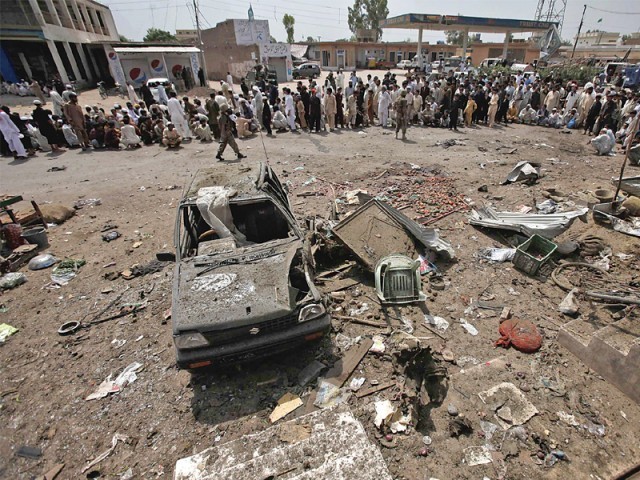 How many more dead bodies must they put under the open skies for us to realise what monstrosity has just ripped through us? PHOTO: AFP

“My heart cries tears of blood for the Hazaras… #ShiaGenocide, when will we wake up?… What has Pakistan come to?! Oh God!!… This country does not deserve to be called “PAK-istan”…”

These statements are clichés. They mean nothing. They have no purpose. They’re just uttered to make ourselves feel good about atrocities which we mostly can’t, and usually won’t do anything about.

How many of us had the apathy to find out that the doctors and rescue teams ran in terror as the terrorists from Lashkar-e-Jhangvi (LeJ) allegedly told them they would be murdered if they tried to treat the “kaafir” Shiites who desperately needed treatment?

“I’m going to launch a protest movement on Facebook! Enough is enough!… I’m live tweeting the #HazaraGenocide… This madness needs to stop!…”

Yesterday when David Cameron was standing under the open skies of Islamabad, people were dying in Peshawar. While our leaders were busy making promises to fight terrorism, and eradicate the electricity menace, kids were burning, screaming, dying.

Did a single hair on their heads ruffle? Did they shudder?

Did they feel a cold settling in their guts? Did anyone care enough to go to Peshawar and look the mother of the 6-year-old girl in the eye and tell her,

“I’ve failed… Forgive me? We’ve all failed, forgive us all…?”

I used to think Pakistan belonged to us. But recently I have realised Karachi belongs to A, Quetta belongs to B, and Lahore belongs to C. Federally Administered Tribal Areas (Fata) belongs to the foreigners, and Islamabad is home to ostriches.

Pakistan is not mine. Even my home is not mine. I am not a Pakistani. None of us are. Or ever were. It was a delusion that took 65 years to wear off, it seems.

Abul Kalam Azad, a fierce opponent of the Pakistan movement had predicted in 1946 what would happen to us. East Pakistan would break, and the west wing of Pakistan which was to be ruled by feudal lords, and uneducated loafers would self destruct.

Abul Kalam Azad said in 1946 this delusional idea of “we’re all Muslims and hence one nation” is false. We are not one nation. We are Sunni, Shiite, Ahmadi, Barelvi, Wahabi, Sufi, Salafi, Hanbali, Ismaili, Alawi, Naqshbani, Uwaiysi, Qadri, Zikri and so on and so forth. And amongst these we are Takfiris, incapable of accepting the faith of another, or living by it.

“Shias are kaafirs, they deserve what they’re getting… Our movement is to get Shias declared as non Muslims under the constitution of Pakistan… Killing Shias is tantamount to killing the enemies of Islam, and that is what Islam tells us….”

It seems such a long time when I was apologising to the Shiites, but even that apology sounds fake, and hollow, and distraught.

Last time the Hazaras took 86 dead bodies and waited in the open cold under the star less night waiting for deliverance which never came. How many more dead bodies must they put under the open skies for us to realise what monstrosity has just ripped through us?

“They say after every fall, there is a rise…. But the bottom feels like an endless pit of sweltering tar that’s pulling us deeper inside….”

Pakistan started dying the day it was born. Our “Islam”, our “Musalmaniyat” was the cancer that started feeding the hate and disgust that we feel toward one another.

Once upon a time it was the Christians and Hindus and Parsis who felt scared. Now we Muslims feel scared of other Muslims. Islam’s neck was held by the throat and squeezed till its eyes popped. As a result Islam was replaced by a vicious form of barbarianism.

When Pakistan started dying, we held candlelit vigils. We made Facebook pages dedicated to the cause of defending our fallen brothers. We promised we’re all Pakistanis. But one by one we kept falling.

When Pakistan started dying we Tweeted nonstop. We shouted, fought, but we lost. When it was our turn to be slaughtered like animals, we cried and we begged for mercy that was never forthcoming.

They came for the Hindus. We didn’t care.

They came for the Christians. We didn’t care.

They came for the Ahmadis. We said Ahmadis deserve this!

They slaughtered Salman Taseer. We garlanded his murderer.

They came for the Shias. We turned a blind eye.

They’re coming for us and there is nothing anybody is doing about it.

An MBA candidate at Willamette University by day, blogger hobbyist by night.

New Delhi gang rape: Who can change the attitude of such men?