Rimsha Masih: Another victim we failed to protect 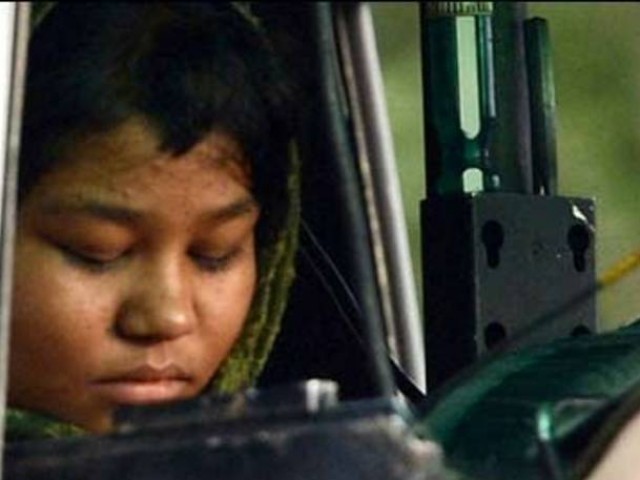 In a country where terrorists, militants and suicide bombers roam free, maximum security prisons have been occupied by innocent victims like Rimsha. PHOTO: AFP/FILE

“I love Pakistan. I won’t ever leave my country.”

Little did she know that after being accused of a crime she did not commit, under laws that were inherently in favour of her accuser, she will be forced to flee the country she held dear, despite how little it offered to non-Muslims like her. Today, Rimsha and her family have been forced to seek asylum in Canada.

Rimsha was accused of burning pages of the Holy Quran by her neighbour, Khalid Jadoon in August 2012. She was detained in a maximum security prison for several weeks before the courts discovered that Jadoon himself had burnt pages of the Quran to vent a personal grudge against 14-year-old Rimsha who was suffering from a possible mental impairment. Jadoon, a grown man and religious leader, faced no consequence for committing the same crime – defiling the Quran. Hypocrisy at its finest indeed!

It is nothing short of ridiculous that in a country where terrorists, militants and suicide bombers roam free and uninhibited, the maximum security prisons have been occupied by underage children like Rimsha whose only fault was that their religion did not correspond with the majority.

It is even more frustrating that while Jadoon roams free in spite of attempting to frame an innocent victim, Rimsha was exposed to incessant death threats by religious fanatics.

Even the support of leading political parties was insufficient for Rimsha to find respite:

In a characteristic failure to provide sufficient protection, the government of Pakistan left little choice for her family but to seek refuge abroad.

So after 65 years of chaos, this is what it comes down to. From Benazir’s killers to Lashkar-e-Jhangvi’s anti-Hazara bombers, from street criminals who terrorise Karachi to politicians who suck the treasury dry of funds, every guilty crook of Pakistan walks free. In the meanwhile, those upholding a cause are shot down; those found innocent are forced to flee the country.

Since 1988, nearly 1,000 cases similar to Rimsha’s have been filed under the blasphemy laws of Pakistan according to the HRCP. Before Rimsha, Aasia bibi, another Christian, convicted under the blasphemy laws in 2010, received global attention for the case against her. Aasia offered water to heat struck women in Punjab. When they accused the water from her house of being impure and unfit for Muslim consumption, Aasia bibi defended her faith in response. Unlike Rimsha, Aasia bibi is still in prison right now, awaiting death by hanging.

It brings tears to my eyes to reflect on how easily we can misconstrue an act of kindness by a non-Muslim in our hurry to defend a religion we fail to understand time and again.

Rimsha’s father, Masih, summarised the plight of non-Muslims in Pakistan aptly when he said:

“The only reward for us (Christians) in this country is either the Muslims call us “kafir” (infidel) and burn our homes, or call us a “choora” (dirty) when we clean their filth.”

He was spot on. Only a few months later, 3000 violent mobsters destroyed hundreds of homes in a Christian locality of Lahore, in yet another incident of intolerance and abuse.

The blasphemy laws are hailed by extremists as ordained by religion itself, instead of being man-made legislation susceptible to abuse. Not surprisingly, these are the same people who find the lives of non-Muslims like Rimsha Masih less valuable than those of the Muslim majority.

As Rimsha is given asylum by the Canadian government, she joins scores of blameless accused who emigrated to escape extremists in Pakistan. Before Rimsha, teenage activist Malala Yousufzai was detained abroad for treatment, with her father being given a job in Birmingham to sustain his family.

While reports say that Malala and her family are determined to return home, it is hard to imagine a safe and secure environment here in Pakistan for Malala and the work she hopes to continue. For her own sake, I wish she can find an environment abroad, conducive to her ambitions for peace and education.

What does Rimsha Masih have in common with activist Zahra Shahid, peace icon Malala, the tourists killed in Gilgit-Baltistan or the deceased who line the bombed streets of Quetta? Like these victims before her and surely the ones to follow, Rimsha too has no prospects of achieving peace or justice in her homeland.

As the well-educated Twitterati bid Rimsha farewell around the world, there are still a few left in Pakistan who pray for her and wish her safety and health:

God bless you, Rimsha Masih. May you find peace and a better life in Canada than what you would have had in Pakistan.

We hope you find a better life in Canada, Rimsha.

You deserve much more than we Pakistanis had to offer you.