A will made of steel and an aircraft made in Pakistan 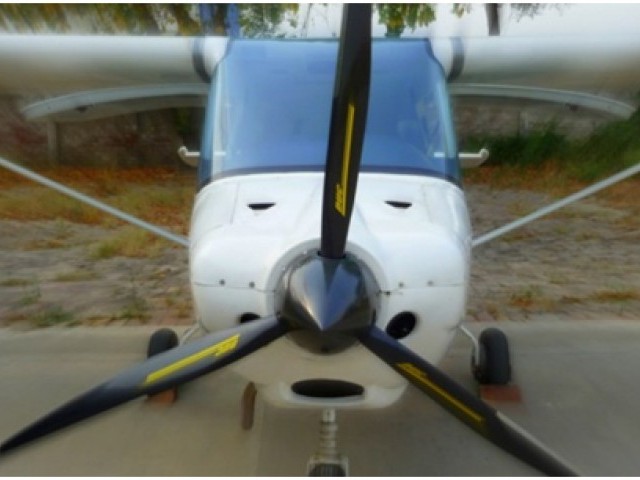 “That, my friend, is the very first airplane made in Pakistan by a private aircraft manufacturer,” proudly stated my host pointing in the direction of the aircraft hanger behind me.

As I turned around with anticipation and saw an all composite two seat, three propeller aircraft, gleaming in the sunlight coming in through the hanger vents, a feeling of pride overwhelmed me. It was immediately followed by profound respect for my host entrepreneur and his long and inspiring journey from a dream to its realisation parked right in front of me in that hanger.

My host was Faisal Naveed Asif, CEO of Scaled Aviation Industries, whom I had met on the judges’ panel at a business plan competition in a local university just a few weeks ago. Before the event, when Faisal introduced himself as the CEO of the only private-sector, certified, aircraft manufacturer in the whole of Middle East and South Asia, I was immediately impressed and decided that I must know and tell this man’s story which is guaranteed to be inspirational for seasoned and budding entrepreneurs alike. I asked Faisal if I could come and visit his facilities and a couple weeks later he called and we agreed to meet at Scaled Aviation’s Walton Airport Royal Hanger.

Faisal is a soft spoken and down to earth individual. However, underneath that modesty, he hides a brilliant mind trained by years of work with the defence sector, especially the Air Force and excellent academic credentials. When giving me an overview of some of the innovative aspects of his manufacturing process, his eyes lit up like those of a father telling the story of his child’s achievements. I could tell that this man was truly proud of all the ingenuity around him, most of it, a product of his own brilliance.

Faisal’s journey started back in 2001 when he announced to his family that he is going to quit work in the defense sector and develop aircrafts in Pakistan. The initial reactions were not very encouraging. He recalls that one of his uncles quipped that he couldn’t produce a stable, four-legged chair in his furniture factory, let alone build an airplane. He also remembers his friends speculating that he has gone mad.

Furthermore, one of the first things Faisal realised after embarking upon this journey was that it’s littered with clearance requirements from numerous departments; the bureaucracy, the red tape, the security clearances, the No Objection Certificates (NOCs), the wild goose chases between departments and ministries. But none of that deterred Faisal.

The man, with the will of steel, persevered and managed to kick off his manufacturing operations in 2006. After about six years of bootstrapping the operations with his own capital and some debt financing, Faisal managed to produce the first air craft in 2012 that was ready for test flights. More importantly, his factory gained the capability of producing dozens of planes of varying capacities every year, making it a potentially viable business. The planes would cost less than many of the high end cars we see on the roads and were more fuel efficient than a standard four door Sedan!

Along the way though, Faisal had to make some compromises because two of the most sensitive parts of the aircraft – the engine and the instrument panel – could not be built in Pakistan because of the stringent laws, lack of economically viable manufacturing facilities and an absent partner ecosystem. He managed to import those parts, but after and among others, clearances from the US Department of State pursuant to Pakistan signing off on the Kerry-Lugar bill. That was a real shock for me!

He once again prevailed and obtained the necessary permissions for his aircraft to start logging airtime. Although this whole experience of getting run-arounds from the government departments and various agencies has left him bitter, he always manages to sneak in a satisfactory smile on his face when recalling his horror stories with the bureaucratic red tape. He proudly narrates the story in which he turned down the offer by an Arab prince to come and build his factory in the Middle East. He was offered anything he would want along with state citizenship, but he refused and chose to pursue his dream in Pakistan.

The day I met Faisal, he had scheduled a flight for his aircraft and was waiting for his pilot buddy to arrive. When it was all set to jet, I was offered a ride in it. Multiple thoughts crossed my mind before I responded to that offer. At first, I hesitated, thinking it is the first of its kind airplanes, the very first off the factory floor. Additionally being a software engineer by training got the best of me.

“What if this plane had bugs?” I asked myself,

“What if it went up and never came down?” I thought.

But then I was reminded of Faisal’s meticulous planning, his entrepreneurial zeal and determination to build a first class flying machine.

“This man wouldn’t take the slightest chance and won’t let anything shatter his dream,” a voice inside me reassured.

It was just a moment’s hesitation and then I said yes. As I flew over Lahore in Faisal’s two seat Storm Rally aircraft, the exhilarating feeling of flying in Pakistan’s first privately manufactured aircraft remained in the backdrop and I couldn’t help but stay in awe of Faisal’s spirit and feel proud to be associated with him by virtue of being a fellow Pakistani.

So there, muffled among the many screaming stories in the media about injustice, intolerance, terrorism, corruption, energy crisis and what not, breathe the whispers of ingenuity, inventiveness and excellence. The untold story of a shy entrepreneur from Quetta who dared to dream big, persevered and fought all odds stacked against him, and built Pakistan’s very own, privately manufactured aircraft!

I flew in it, and it was amazing!

Is currently a Director at Punjab Government's Plan9 business incubator and teaches entrepreneurship at Information Technology University. Previously he was CIO at Lahore Stock Exchange and prior to that, a technology entrepreneur & adviser to Fortune 500 companies. He tweets at @kayzafar twitter.com/kayzafar