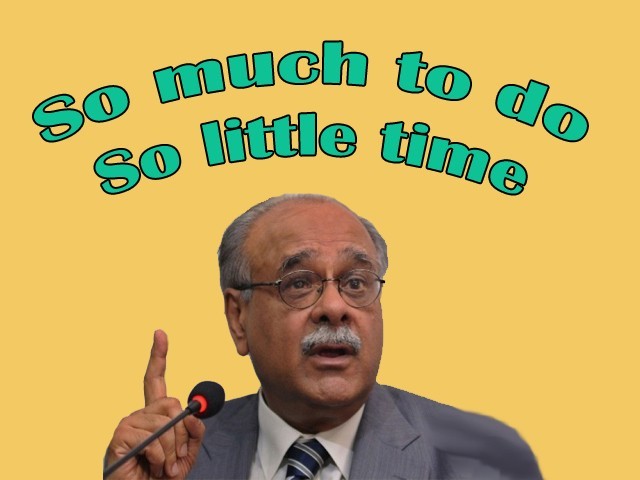 As time has proven, Najam Sethi, the new PCB chairman, is the 'LMFAO' - Lahori Man For All Occasions.

In 1976, Bollywood released a film called Hurfun Maula (jack of all). Very few people realised that this was actually a premonition for what Najam Sethi’s future career would be. The Lahori Man For All Occasions (LMFAO) is now leading the Pakistan Cricket Board (PCB), after stints as caretaker CM Punjab, anchor on Geo, and editor of Friday Times. So here are some suggestions on what he should do in his latest job.

As you might have realised, Pakistan is currently as popular on the global cricket scene as a leper in a surgery ward. However, you can use some good old Pakistani tricks to change this situation. Option A would be changing PCB’s name; after all, banned groups in Pakistan do this with great success all the time.

Try and be trendy, like #NayaPCB, or better yet, use a fun sounding new name like Shahid Afridi Manufacturers (SAM) so that everyone at the ICC calls you Uncle Sam and they all have a good laugh and forget why they shunned us in the first place.

Option B would be to change the names of our stadium venues. Rename Gaddafi stadium to Lord’s Cricket Ground, and send out tour invites to other teams for matches there. Do remember to hang a sign on the stadium reading “Humari koi aur shaakh nahi” (we don’t have another branch) in order to complete the ruse.

We all know that you have more alter egos than a Scooby Doo villain, but while switching caretaker jobs, you would’ve noticed how often certain banned players appear as analysts on TV. I’m speaking particularly about one banned, spot-fixing ex-captain who pretends to still be innocent even as his legal team admits his guilt in foreign courts. I know this won’t be a popular decision with your friends in the media, but as a compromise, maybe you can allow banned players to only come on those talk shows where the anchors have also been caught fixing.

I know these four letters sound like some weird text-speak, but they actually stand for “What Has Fawad Done”? And honestly, what has Fawad Alam done? Despite spectacular domestic statistics and significant hipster support, Fawad’s international career is like our national consensus on combating terrorism – virtually non-existent.

The only possibility is that he has committed some grave, unforgivable sin that none of us know about. Could you please mobilise your infamous chirriya to tell us what that could be? In all honesty, we’ve given up on hoping for him to play cricket for the national side ever again, so at least just tell us the reason why.

As a media man and TV anchor of considerable repute, this is another job that should be right up your alley. Firstly, Ramiz Raja seems to have perfected jinxing the team every time he comes on to commentate. Since our team is barely in need of any further bad luck, the Rambo-curse is quite catastrophic. Please see what you can do about that.

Secondly, for no rational reason, Aamir Sohail tends to “…to…talk…likethiseverytimehespea… ks”. Clearly this is a rhythm issue, and one that requires immediate attention. Some might ask you to also intervene in Wasim bhai’s ongoing ‘War on Grammar’, but he’s Wasim bhai and the only laws that apply to him are the ones he makes up himself.

As caretaker Chief Minister of Punjab, you must have realised that nothing works quite as well as a topical policy that is high on PR and low on tangible value. Therefore, I implore you to capitalise on the current success of Eye to Eye. I am sure there are a wide spectrum of uses and applications, but one instant classic would be to get Taher to sing the new Indian Premier League (IPL) anthem, called Eye To Eye-pee-ell. This would go a long way towards normalising relations with the Board of Control for Cricket in India (BCCI), allowing Pakistani players in the IPL, and eventually solving all political and social crises in the subcontinent… Eye to Eye.

I know that a certain giant-soft-drink-brand is the PCB’s chaddi-buddy, but you must force the international behemoth to break its ties with the Dajjal/Illuminati. You may scoff at this, but there is ample proof of such links in their pre-tournament commercials. For example, in the run-up to the 1996 World Cup, a giant-soft-drink-brand advert showed a young boy dismissing Warne and Lehmann, before being offered a place in the national side by Ramiz Raja.

The precocious brat replied that he’d only join if he was made captain; that ad has since been reliably shown to have led to two decades of captaincy-related infighting. Similarly, the current ad where Misbah tells Irfan, “Pahunch to gaye ho, magar abhi itne barray nahi huay” (You got here but you’re still young) was an eerie precursor to Irfan later (inadvertently) denying Misbah a maiden century by getting out, and is therefore further proof of giant-soft-drink-brand’s Illuminati driven agenda. Please see into this.

Fix the PCB and all its problems:

LOL, just kidding! I just wanted to finish this piece with a joke.