Eye To Eye: The music video that won the internet 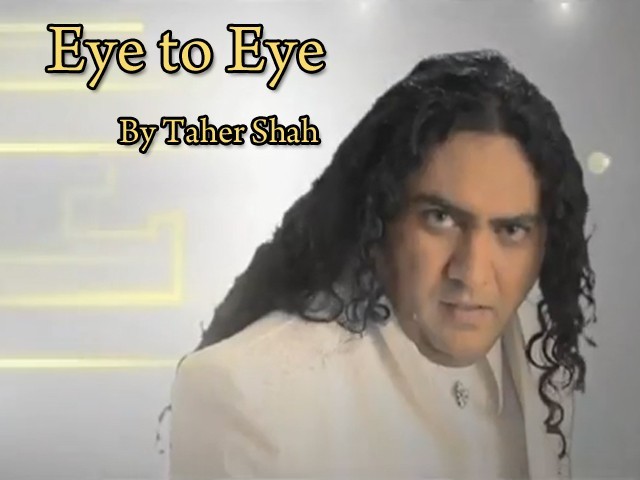 Have you ever been in love so madly that you felt like no one has ever loved the same way before? Well, get the fat out of your head because you lose. Someone has loved like you never can… It is a “genyin killasic” (genuine classic) love that you are yet to experience.

This love isn’t the kiss-and-cuddle kind. It is very modern and a lot like Bluetooth technology, because you can feel it transferring from a distance only between two pairs of eyes. This love is Eye To Eye by Taher Shah.

Accessorised like the true diva that he is, Taher Shah – a model, singer, director, producer etcetera by profession – sways side to side in his latest music video singing about eyes – his eyes, your eyes, their eyes, everybody’s eyes. This video has won the internet. He even has some imaginary paparazzi in the video.

“I am such a colossal fan of this never before seen celebrity. Too exclusive” – guy with camera in the middle. PHOTO: SCREEN SHOT

When Basma, a friend of mine, tagged me on Facebook in his video, she had warned me that it was about “genyin killassic” love. Curious as I am, I clicked on it and have religiously watched it every day ever since. Damn you, Basma, for I will never fall in love with anyone else again.

Taher Shah’s Eye to Eye is no gimmick. It isn’t a joke, but a deep message that many of us fail to understand because we are too distracted by Shah’s curly locks and “essential sensational” blue contact lenses, upon which lush eyelashes of an angel flutter.

Well in his late forties (and looking the part), Shah’s swagger is still like that of a man in his twenties – a strapping handsome man at that.

“I got 99 problems but my hair ain’t one.” PHOTO: SCREEN SHOT

His cherubic cheeks glow as he sings to his double dressed in black, who sings back about “fayebluss exciting eyes”. Yup, there is no one else in the video – not a single human, just a magician (x2) and his framed pictures.

I am about to crush the dreams of many ladies swooning over Shah – he might not be interested in your kind – not from the looks of his video. It contains some severe I-LOVE-MEN messages too, which I hope to God are untrue, because, hey, who are you going to day dream about then?

You want this but you can’t have none. PHOTO: SCREEN SHOT

The background of the video is very diverse and varies from white furniture to white furniture, which speaks volumes about this man’s love for class.

“Keep your love in the soul, make love with Eye To Eye.”

I don’t know how many people have decided to be abstinent thanks to this message in the video. The man is just too convincing, and if he’s loaded with more silver accessories, he might just cure cancer from the positive energy that he emits!

Here are a few things people have uttered on Twitter in the glory of this half-man-half-angel being:

Talent recognised at last! MT @sohaibgulbadan One of the greatest moments in Pakistan music history. "Eye to eye". http://t.co/JHKBEWY2z2

#EyeToEye I just watched it with splendid eyes. I will now watch it again – this time with fantastic eyes.

Many people are considering contacting Taher for adjective lessons because never, in world history, have eyes been defined in so many different “glorious, excellent, stylish, precious” ways:

I'm taking classes from Taher Shah about how to use adjectives.

If you look with your “spectrum eyes” carefully, you will notice that the green screening in the video is fantastic (no sarcasm here).

“Eye to Eye makes epic era love. Lifetime, once in a life. Substantial love is heaven for precise eyes. Spectacular eyes, our eyes – my eyes and your eyes. Eye to Eye… Eye to Eye…”

Are you listening, Shakespeare? No, you’re not, because fortunately, you died before the advent of amazing internet music videos which would have intimidated your poetic skills so much, you would have killed yourself.

Taher feels like a “burtruffly without flower” when he is away from his lover. I don’t think I will ever feel that way and I burn in envy.

You may think you’re cool but you’ll never be Taher Shah in a white suit, blinking profusely, doing his power stance dance, smiling his way into your soul cool. Here is the link to the video for your viewing pleasure:

And now for some truth – I am scarred beyond belief. I wake up and this song rings in my head. Many people on Twitter report that they’ve experienced similar symptoms.

My day starts with eye to eye.

It is easily the most preposterous thing I have ever seen coming from a Pakistani independent artist.