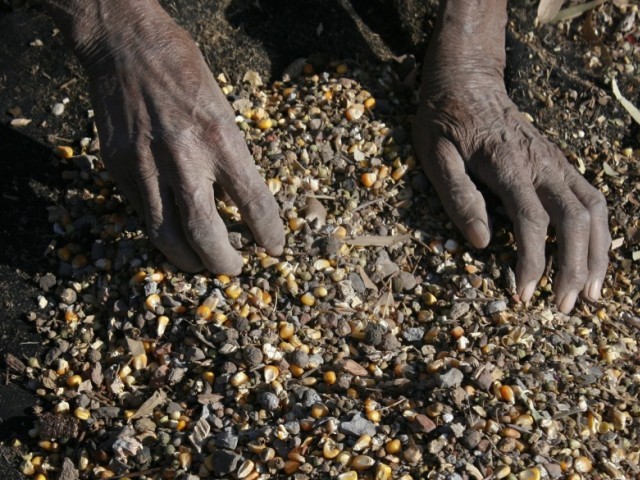 He begs even while fasting so that his children don't go hungry. PHOTO: REUTERS

He was 37; she was 18. They had known each other for just one year. She was a nurse in the dispensary run by him. Today, they are getting married in a simple ceremony. Rejected by seven girls a decade earlier, he had given up on the idea of marriage. But couples are made in heaven and this young nurse was the perfect bride for him.

After the function was over, they were heading home. I was somehow able to go along, invisible. They were near their dispensary just to check if anyone was waiting for medical help.

“Stop!” his wife screamed as she saw a human body lying on the roadside.

We went closer and saw that it was a 12-year-old girl, badly beaten and bruised, in urgent need of medical attention. I didn’t understand why a petty matter like this should dampen the mood.

Without any instruments, and even a first-aid box, what could this nurse have done? It was their wedding night anyway. They didn’t owe this girl anything. They could have left her there and headed home. At least that is what anyone else would do, especially on their wedding night.

But these two were not like others. They took the girl to a hospital, where they spent their wedding night sitting beside the poor girl who they didn’t even know. She was a human – a living being – and that was enough for them. After all, they were running the dispensary for the last few years only to serve the poor people without any motive for profit. I still remember vividly the scenes of that fateful night.

I wept tears of happiness to know that someone somewhere had a heart of pure gold.

I was standing in one of the busiest markets in Peshawar – Saddar Bazaar. The sweltering August heat was getting to me, like it was to everyone. The roads were deserted and even the people who ordinarily swarmed the market in their air-conditioned cars were nowhere in sight.

I was lost in another scene. An old man was sitting right in the middle of the bazaar. He was 82-years-old to be precise. It seemed as though he was enjoying the sizzling heat. His old clothes were drenched in sweat, but he was in no hurry to leave. There was a certain satisfaction in his eyes – the kind you don’t see often. Curious, I went to him and stood by his side, only to discover something that shocked me.

What can be more heartbreaking for a mother than to see her son, weakened by old age, begging under the scorching sun? And that too in the month of Ramadan, fasting?

I scolded him and told him that he had done enough and now he needed rest. He replied,

“Mother, if I do not do this, your other children will die of starvation. They are hungry and waiting for me to buy them some food. They did not have anything for their sehri and have been fasting all day today; they will not have anything to break their fast with at iftar time. O’ mother, do you wish them to die? Dear mother, the children are asking for new clothes and toys for Eid. How can I rest? When they hold me with their little hands and ask expectantly what they will wear this Eid, what am I to tell them? I cannot see tears in their little eyes. O’ mother, allow me to do my work. I cannot rest and I will not rest until all your children are fed and sheltered. I will not give up till my last breath has left my body.”

I wept, and with me wept the heavens.

This was not the first time that I had seen him begging. He had done it in Karachi, in Lahore and in Quetta. In fact, he started begging all the way in England 60 years ago but he was unabashed.

I told him numerous times that at least he should buy some new clothes and perhaps a new home from his hard earned money, which he had every right to spend. However, every time, he would say something it would leave me teary-eyed so eventually I stopped making my pleas and allowed him to live for the desolate.

Like every other Friday, I waited for him in vain. He never comes home on Fridays, I knew that. This particular day, I saw him with some special children. They were abandoned by their own mothers. Some of them were born out of wedlock, some were physically or mentally challenged, and the rest were simply unwanted because their parents already had too many mouths at home to feed.

My son bathed them. Then he ate with them and took them all to the mosque with him for Jumma prayers.

He has been doing this for years now.

He still lives in a two-room dingy apartment with his wife and children. He has two pairs of clothes which he wears on alternate days.

His family is living on the income that comes from the securities and government bonds that were bought by him years ago.

About two decades ago, somebody told me that he holds the record for working the most consecutive days without any rest. I smiled because I know that this is the absolute truth.

His is not a regular, white collar 9-to-5 job kind of guy. His day starts at Fajr, well before dawn, and it ends around midnight. At night he sleeps on a mat on the floor.

Now two more decades have passed, and he still holds the record – 59 years and counting! For you, it is merely another record, but for a mother, it is awfully painful. I wept every moment of those 59 years, thinking about my poor son. He did not even find the time to attend his daughter’s wedding as he was busy elsewhere attending to the needy. And when he, along with his wife Bilquis, went for Hajj, it was in an ambulance full of medical supplies.

I wish I had just a few more children like him. I’d have been a prouder mother and my condition would have been much better. But alas! I don’t know for how long I will weep with my one son, whose shoulders are burdened beyond belief; a son who doesn’t want to stop. He is very sick nowadays and is bound to the hospital bed. He has fainted countless times for working more than he physically should. He does not listen to me, but he makes me very proud nonetheless.

Pray for my son, will you? I cannot afford to lose him because there can never be another like him…

I am his mother, Pakistan. He is my son, Abdul Sattar Edhi.