Naya Pakistan, where Salmaan Taseer’s murderer is a hero 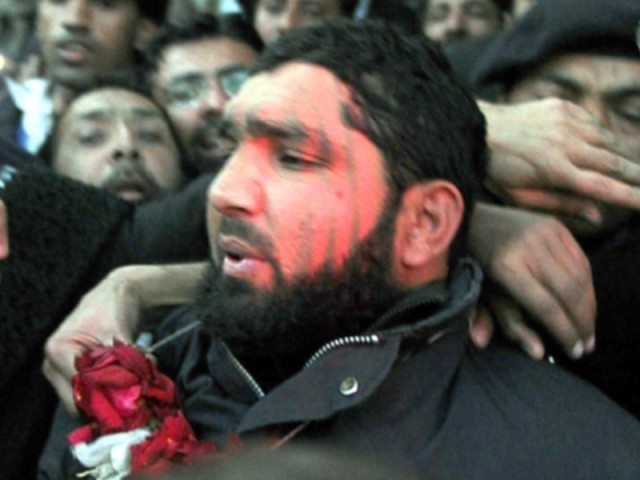 It’s hard to know where to begin when a lawmaker in the National Assembly says a cold-blooded murderer should be released. Only expletives follow when you realise it was a Pakistan Tehreek-e-Insaf (PTI) MNA and former governor of Punjab Salman Taseer’s murderer Malik Mumtaz Qadri is the killer in question. A man sentenced to death by a court of law.

These are the lawmakers we elected folks. Naya Pakistan has arrived. A country where we try to wash our hands off a war which is being fought on our soil, against our security forces by monsters we created with the money and complicity of the USA and Saudi Arabia.

In Naya Pakistan, a party comes into power, after nearly two decades of failing to gain any momentum, on the back of the supporters of MNA Mujahid Khan, a man who wants Qadri released.

It still surprises me, how Taseer was killed by Qadri who was one of Taseer’s bodyguards, while the rest of his security detail watched, guns in holsters. And then the silence was even more shocking, the silence of those in power then; those wanting to be in power and those planning to sail into power in the next elections on a wave of right-wingers.

Somehow that ugly silence was louder than the supporters of Qadri; the Facebook groups lauding him, the clerics rallying for him and the lawyers showering him with petals. That silence continued as the judge who sentenced Qadri left the country in fear. After all the radicalised crowd which shows up outside courtrooms to support a murder can only follow in his footsteps and do as they believe is just.

But the silence evaporated today, Naya Pakistan’s water just broke. Mujahid Ali Khan just gave birth to the ‘Naya Pakistan’ we should all have expected. And many of us were anticipating this horror show.

The lawmaker’s public stance is very much the voice of PTI, even if Dr Arif Alvi goes blue in the face saying otherwise. The MNA is in the National Assembly, representing PTI.

And seems to me, the PTI’s disconnect with reality is a party trait. Their leader, Imran Khan thinks the Taliban are a peaceful lot and their Khyber-Pakhtunkhwa (K-P) Information Minister Shaukat Yousafzai thinks the war fought in our backyard on our people is not really our war.

I feel for the family of the man who stood for one Christian woman in a country where blasphemy laws are used as a weapon much cheaper to procure than a TT.  We did not do them justice by keeping a lid on the outrage against his death. We didn’t even follow his lead on blasphemy laws being abused. And we continue to not stand by what Salman Taseer eventually died trying – ending the abuse of  the blasphemy law.

I was under huge pressure sure 2 cow down b4 rightest pressure on blasphemy.Refused. Even if I'm the last man standing

I guess as far as telling moments are concerned, everything after his stance, his death and his killer’s sentencing…right up to Mujahid Ali Khan’s demand for Qadri’s release has said volumes.

The manner in which a country rallies behind heroic actions can define it and its people. Salman Taseer was the hero in the story but a loud majority rallied behind Qadri, changing our definition of the word ‘hero’ since anyone who disagrees with the new meaning is also too scared to do anything about it.

In PTI’s Naya Pakistan, heroes blow up police stations and villains put men like Qadri behind bars. How unfortunate for the people of K-P, that it’s the PTI birthing ground.