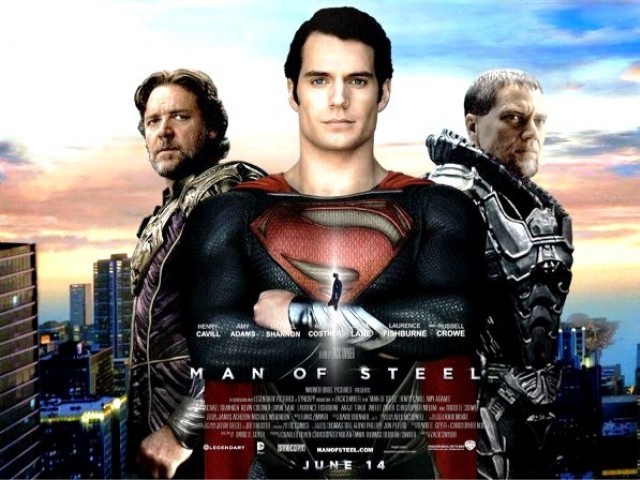 Snyders proved he’s more than capable of handling Superman; hopefully the sequels and the other DC Comic Database reboots will be similarly lucky. PHOTO: PUBLICITY

Both are true in varying ways.

Batman is a unique character. He has no superpowers, apart from fabulous wealth and slight insanity. His gadgets can all be distilled into existing or easily imaginable variants unlike the only other rich superhero, Iron Man. Thus his stories and villains can be adapted into movies that are much closer to current life. The Dark Knight has more in common with Heat than X-Men.

Therefore, while the Nolan formula worked, and how, the situation was quite isolated and should not be used as a magic brush to liberally apply on all future super-hero movies.

This brings us to the new Superman movie, Man of Steel. Directed by Zack Snyder and “overseen” by Christopher Nolan, the movie is a sprawling 143 minute attempt at rebooting one of the most beloved franchises in history and bringing it up to speed with the demands of the current generation.

The movie has soared since its release, breaking records and earning millions but in its wake leaves controversy as far as reception is concerned. Rotten Tomatoes (RT), my personal ratings bible, gives it a dismal 56%, despite 82% of viewers actually liking it. Many comic book fans are up in arms too.

The question that comes to mind is: what went wrong?

In short, they tried to Batman it. The new Superman universe is a de-saturated vista of violence and destruction. Fans of the old movies and comics lament for the charms of Christopher Reeve in the face of this conflicted saviour, the indefatigable goodness of young Clark/Kal of the comics versus the angsty youth shown here. The seemingly biased preference towards Jor-El’s guiding influence as compared to Pa Kent’s. The drawn out fight sequences, the dizzying visuals, the destruction of Metropolis being a cheap evocation to when the World Trade Centre came down and the hammy portrayal of Superman/Jesus analogies.

To them I say, get over it. I thought the movie was quite good.

Michael Shannon’s performance was amazing. Thank God the villain wasn’t a rehash of the Joker à la Silva in Skyfall – a quirky, creepy baddie with weird hair and an overreaching master plan. This one was a powerful figure whose anger translated forcefully and whose cause could very nearly be believed in. While Kevin Costner did suffer in the chronological back and forth, his performance was nuanced and delicate. His final scenes in the movie were beautifully moving. Diane Lane gave a similarly – no pun intended- human portrayal of Ma Kent. Cavill’s performance as well was measured and calm, anchoring every scene he was in with a demeanour that very rarely showed any unnecessary unrest, except when absolutely unavoidable.

Visually it was a treat as well. Snyder has never shied from over-the-top visuals and here he deploys cutting-edge CGI (Computer Generated Imagery) and explosive violence in action scenes while wielding soft-focused gorgeousness in the happier memories alongside horrific environments in darker dream sequences. I loved the flashbacks, the blink-fast speeds of the Kryptonians and that shot of Lois and Superman in the desert – also, the Point Of View (POV) punches!

Not to say it was flawless. It was clearly too long and the scale of destruction seemed silly at times. Maybe try and take Zod away from the city? Also, how does Krypton’s top scientist defeat their top solider in hand to hand combat? Of course Lois Lane cannot die, despite being struck by a Kryptonian whip nor while locked in a damaged escape-pod while plummeting through the atmosphere nor by falling out of an airplane.

Does it deserve RT’s 56%? Nope. Man of Steel does a fine job in refreshing a legendary franchise and making an adaption worthy of attracting a whole new generation of fans. In fact, Rotten Tomatoes’ own editor is shocked at the reviews.

If it was a direct adaption of the comic books it would’ve become a plodding disaster like Watchmen, let down by its slavery to the amazing source-material. If they’d stuck to the course laid by the past it would have become another Superman Returns which, ironically, was a much lesser movie than this yet somehow scored a 75% on RT.

Reboots are usually an easy way to get away without using much imagination and current movies are all grey-scale and full of angsty teenagers pandering to this generation’s inflated sense of self-worth but this is nowhere near a complete victim of those stereotypes.

In my view, Snyders proved he’s more than capable of handling Superman; hopefully the sequels and the other DC Comic Database reboots will be similarly lucky.

Superman begins? Not a bad way to look at it.

Final words: Go watch it with an open mind. Skip 3D if possible; itdoesn’t add much. Keep your eyes peeled for Easter eggs!