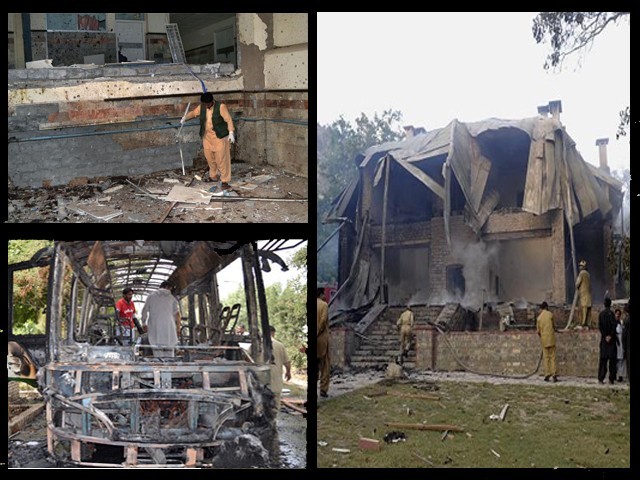 The events of June 15, 2013 were condemned by almost every political figure in Pakistan but none discussed the reasons behind it.

Not very long ago, a prominent political leader questioned Jinnah’s nationality. Fortunately the nation, as well as Quaid, survived the insult, and life moved on.

However, never in the history of Pakistan was Jinnah disowned from his contributions towards an independent and sovereign Pakistan, nor made into an oppressive figure that haunted the corridors of Pakistan’s national history. Even the hard-headed Taliban never questioned Jinnah’s personality and his attitude towards Islam (though he was condemned by Khyber Pakhtunkhwa’s (K-P) former ideological leadership for his alleged secular thoughts). The reason is simple; Jinnah was no dictator.

On June 15, 2013, miscreants attacked Ziarat Residency in Balochistan – a monument associated with the founding father as he spent the last few days of his life in 1948 at the place (earlier a sanatorium for tuberculosis patients).

What is interesting to note here is that Jinnah was an established lawyer and a highly respected international dignitary who had spent over half of his life in Europe (he even owned a small estate in England at a time). Unlike his wife (Ruttie Jinnah) who he sent off to Paris for a change in environment during her last days, Jinnah preferred Balochistan, simply because he believed in Balochistan.

Moreover, Jinnah had a much deeper understanding of the Baloch sentiments over six decades ago than any of the current politicians have at the moment. He received criticism from a few over his decision of making Balochistan a governor general province in early reforms that he responded to in a way expressing his deepest emotions for the province.

Responding to a question in a press conference at Sibi: February 15, 1948, Jinnah specifically voiced his feelings for Balochistan, he dismissed dictatorship of any form and said,

“I take this as flattering to myself that my heart, my soul and my pulse ensure that I shall be very useful to Balochistan in its present condition. There are two reasons for this proposed reform: (one) I want to help Balochistan in every way I can; and (two) things will be done far more quickly.”

Despite Jinnah’s love for Balochistan, by targeting a symbolic monument related to him, the  Baloch Liberation Army (BLA) basically targeted the ideology of Pakistan that they do not believe in.

The negative feelings that Balochistan hosts took decades to build up and, thus, will require decades to be washed away from the minds of the Baloch youth. Pakistan is not in a position to withstand another fall of Dhaka, nor to wipe off each and every member of the BLA through military action.

The solution could be a simpler three points:

The mentioned points might not be an easy task to take up, but are the only probable options we have left since we have already explored our way through many political and military solutions.

Balochistan is a province that feels slighted due to an inferiority complex, and rightly so. How many Baloch national singers, actors, cricketers, anchorpersons or morning show hosts do you see around? Are there any famous holiday resorts Balochistan? Has any businessman ever planned to build a sky scrapper for Balochistan?

Do you see now, how the Balochis feel excluded from the rest of the country?

The events of June 15, 2013 were condemned by almost every political figure in Pakistan, but no one discussed the reasons behind it or how to alleviate the sentiment behind the attack. We have to understand that there is a difference between the misguided youth, freedom fighters and trained terrorists.

Maybe it is time for us to love Balochistan like Jinnah did.

Radio presenter, writer, poet and avid reader. He is interested in culture, literature, history and music. He is also compiling his first collection of Urdu poems. He tweets @Ahsaas_Wasti