Balochistan bleeds: A Saturday that shook the province to the core 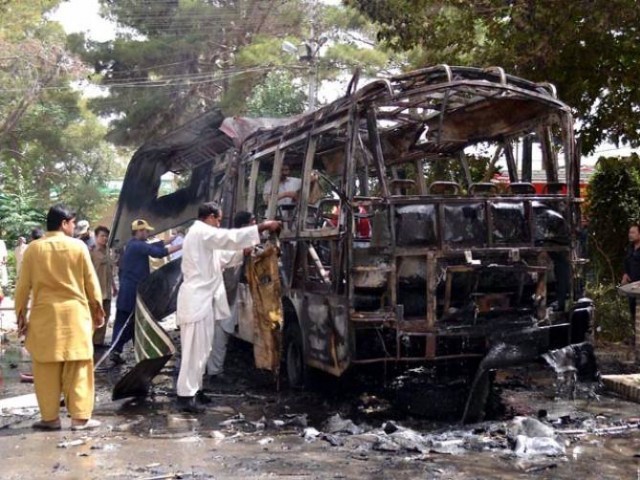 The bus carrying the university students after the blast. PHOTO: AFP

Sardar Bahadur Khan Women’s University is the only women’s university in Quetta. It was established in March, 2004 and approximately 3,000 female students are currently studying at this university.

Last Saturday, something tragic happened that left these students scarred for life. Now, they worry if they will ever be able to pursue their dreams.

Like any other day, students attended their classes, packed their bags and switched on their cell phones to mark the end of their school day. They were chatting, laughing and bidding their friends farewell as they made their way towards the bus that would take them home. This was an everyday ritual at the university – nothing special, nothing out of the ordinary.

However, little did they know that fate had something else in store for them.

Around 3pm, as the bus had just begun to move forward, it met an explosion; the deafening sound could be heard miles away. Upon hearing the powerfully loud sound, people nearby rushed to the scene. They couldn’t believe their eyes when they found the bodies of these innocent young women torn to pieces lying on the ground at the blast site.

It was the first ever organised attack on the women of Balochistan.

Soon after the blast, the bus caught fire which further added to the death toll. Initially, 10 female students were reported to have been killed. The dead bodies and the injured were moved to Bolan Medical Complex which is located close to the university. Security personnel, along with higher officials, rushed to the hospital where another suicide bomber blew himself up. This not only multiplied the number of the dead bodies, but also showed that they would target anyone, even high officials.

The hospital echoed with gunshots soon after as a skirmish broke out between the security personnel and the terrorists. This further resulted in the death of at least 25 people including 14 female students of the university along with the deputy commissioner of Quetta. Four security personnel and four nurses also died in this tragedy.

Eye witnesses reported that the firing could be heard from inside the hospital as well as the roof of the hospital, aimed at different directions. Dr Abu Bakar Baloch, while talking to BBC Urdu, said that he saw the attackers, some of whom were carrying weapons and one of them wearing a jacket with explosives attached to it. This man was asking Sunnis to leave while keeping Shias hostage.

Furthermore, in a press conference, Interior Minister Chaudhry Nisar Ali Khan said that a subsequent siege ended after security forces stormed into the building. Additionally, he said that the security forces were able to free 35 people trapped inside the building, killed four of the attackers and arrested another.

This is the first major terrorist incident since the new provincial government took office last week.

Soon after the horrific incident, clichéd statements were flung out by big wigs and they vowed to deal the terrorists with iron hands- this time.

Lashkar-e-Jhangvi (LeJ) as usual claimed responsibility for the attack.

While talking to BBC Urdu, an LeJ spokesperson said that the attack served as revenge for an earlier raid that took place on June 6, 2013. This was done by security forces against a group in Kharotabad, Quetta, in which five persons including a woman were killed.

Earlier that day, Ziarat Residency, the last home of the founder of Pakistan Quaid-e-Azam Muhammad Ali Jinnah, 80km south-east of Quetta City was burnt by separatists. The Balochistan Liberation Army  (BLA) claimed responsibility of the rocket attacks in Ziarat and removed the Pakistan flag, hoisting the BLA flag in its place.

Ziarat Residency after the attack by BLA separatists. PHOTO: AFP

Conspiracy theorists believe that Saturday’s rocket attacks on the Ziarat Residency, the bomb blast in the women’s university bus and the one in Bolan Medical Complex were a simple message to the Balochistan government; they say it is interlinked with the cases of missing persons and Nawab Akbar Bugti’s killers.

On June 9, 2013, just a few hours before the oath taking ceremony of the chief minister of Balochistan, five bullet-riddled bodies were recovered from different parts of the province. This may have been a warning for Dr Malik Baloch to stay away from the aforementioned cases.

The establishment has never really engaged in formal dialogue with the Taliban and separatist groups of Balochistan. Perhaps, this is something that it should look into. All possible efforts should be made for the religious-separatists and the government to reach common ground.

Conclusively, the unfortunate events that took place on Saturday lay down a real test for the newly elected government to understand the very clear but thin line between the ruling elite’s internal and external policies.

Many believe that if they get through this challenge successfully, they can easily complete their legal terms; otherwise, no authority can stop the left right march to Islamabad.