Misbah is not responsible for our loss in the Champions Trophy 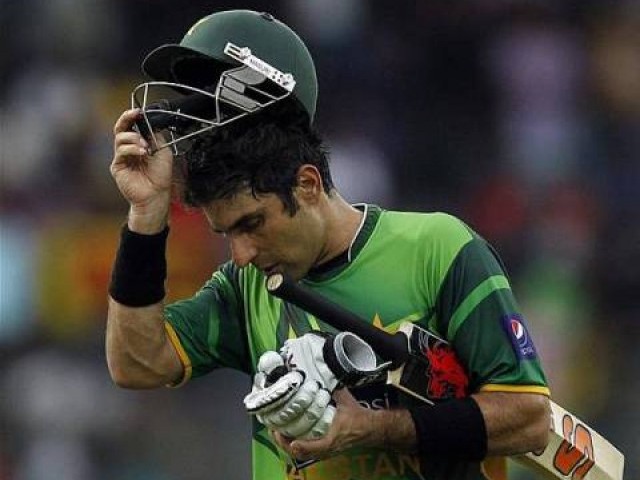 "If you are not delivering as a player, the team will suffer. At the moment, no one is justifying their place in the team. No one is getting runs." - Misbahul Haq. PHOTO: REUTERS

Too long has Misbahul Haq been made fun of, criticised, and blamed for Pakistan’s losses. When Pakistan loses, it’s Misbah’s fault. When Pakistan wins, an individual performance by a more ‘exciting’ player is credited. Enough is enough!

When Misbah replaced the infamous Salman Butt (former captain), the team and the country was at its worse in terms of its reputation, morale and performance.  Since then, Pakistan has been re-moulded into a force to be reckoned with – not by Afridi, or any other individual, but by Misbah.

His mature and calculated approach to the game has not won him fans. Instead, it has made him a target of ridicule. He is not being properly appreciated, considering what he has done for his country – leading from the front with consistent individual performances, well balanced captaincy and hard work.

He won respect for Pakistan cricket after the debacle that occurred three years ago in England. Between 2010 and 2012 Pakistan under Misbah had the highest win/loss ratio in the world. Also, Misbah is the fourth most effective captain in Pakistan’s test history as of date, ranking three places above Imran Khan.

Now that Pakistan has been knocked out of the last Champions Trophy, the most disappointing aspect of this is that Pakistan’s batting has been the reason behind it. Yet again, our batsmen failed miserably against a downsized South African attack and an abysmal West Indies attack, both of whom got thrashed by the Indian batsmen.

What personally has most disappointed me about the tournament is that the batsmen failed to show the heart that their captain showed. Leading from the front and scoring back-to-back fifties should have been enough to secure at least one victory if not two, but if on the other end the batsmen are struggling to reach double figures, it is not a wonder that we could not overcome even a meagre target of 235.

Pakistan had come to the tournament as one of the top contenders for the trophy and after their dismal performance, barring the captain”s role, Misbah rightfully showed his frustration over it in the following words:

“If you are not delivering as a player, the team will suffer. At the moment, no one is justifying their place in the team. No one is getting runs.”

He further expressed his exasperation by saying:

There were no excuses made and the man told it like it was. He vocalised the sentiment felt by followers all over the world, albeit in a more gentle manner.

Despite him being to the leading scorer of the tournament at that point, the crowd had booed him and he did not justify himself instead he went on to say,

“When you produce these sort of performances, they (the fans) have the right to say this. The players need to take responsibility.”

“The players need to take responsibility” — this statement highlights not only the character of the man but the fact that he doesn’t only preach, he also follows this principle. A captain’s role in cricket is most prominent when the team is fielding, and the bowling and fielding in the last two games showed his leadership ability. Making the West Indies fight tooth and nail to chase a tally of 170 was a clear example of that.

Pakistan doesn’t deserve Misbah; we don’t deserve a mature leader and we most certainly don’t deserve an effective one. All Pakistanis care about is showmanship. The people of Pakistan go head over heels for a below average all rounder, but as soon as there will be someone who is not doing the conventional thing, like being a defensive captain, regardless of the fact that he is winning them games, he must be terrible.

At the end of the day, it doesn’t matter anymore. Misbah will go down as one of the most efficient and productive captains in Pakistan’s cricket history and only the statistics will be proof of  that. However, he will always be remembered as ‘tuk tuk’, the guy who ‘tuk’d’ away for his team and country, but they ‘tuk’ away his hopes of winning the trophy.

An economics student who loves ice cream, reading, Game of Thrones and cricket. He tweets as @ajzeb www.twitter.com/ajzeb

When giants come to play

Asad Mushtaq is a hero! Winning a Sword of Honour isn't easy