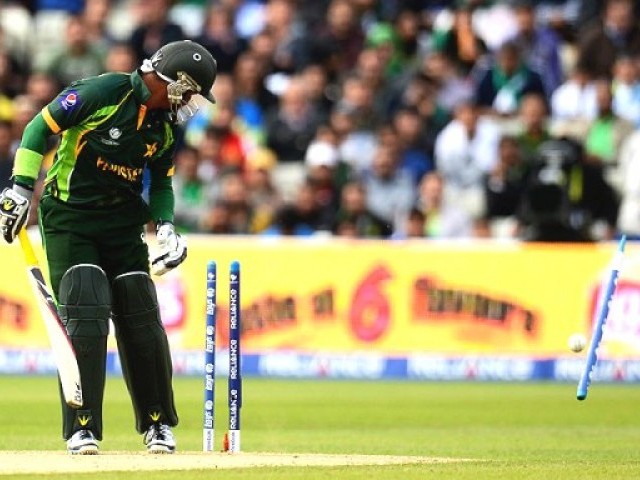 With all the other batsmen falling like nine pins around him does Misbah have any other option left in his bare armour? PHOTO: REUTERS

Has there been a worse Pakistani batting line up in recent memory then this fledgling, fragile and technically incompetent unit?

It is almost unbelievable to comprehend that Pakistan was considered as one of the top contenders for the title before this Champions Trophy commenced.

Yes, batting has always proven to be our Achilles heel and usually the only reliable route to victory is when the bowlers can deliver knock-out punches. But how often can a bowling attack deliver when their batsmen perish for 170-odd in one game and fail to chase down a modest 235 in the next?

Something is seriously wrong with the structure of Pakistan cricket and its selection criteria as well as the grooming and polishing of talent. Maybe it is all about the mindset and the failure of the system in liberating our young batsmen from the fear of top quality bowlers (and some ordinary ones like McLaren and Roach).

Another factor could be the lack of talent, skill, temperament and confidence.

This also attaches serious question marks on the effectiveness of the work being done at the national cricket academy and the value of the input that highly paid foreign coaches bring to Pakistan cricket.

If the end result will perennially remain as catastrophic as this latest Champions Trophy debacle then why even bother with this fancy coach philosophy?

I am sure that a local, level-three qualified cricket coach can deliver equally abysmal results at one-tenth the salary.

In the year and a half following, Misbahul Haq’s ascent to captaincy consistency seemed to be creeping back into the highly volatile and turbulent world of Pakistan cricket. The doggedness and resilience born in Imran and Miandad’s eras and furthered in flashes by the likes of Wasim Akram and Inzamam was gaining momentum and winning the hearts of a cricketing mad nation. Even the bitterness and anger emanating from the spot-fixing saga seemed like a distant memory.

Then came a testing tour to South Africa and all the preceding progress unravelled swiftly; our batting line up that had been warming up merrily on flat UAE pitches returned to their old swishing and nervy ways on bouncier wickets. Bar Younis and Shafiq, the rest of the technically-deficient batting line-up folded in a jiffy and even a heroic bowling effort from the consistently fantastic Saeed Ajmal could not prevent an absolute drubbing.

So what lies next for Pakistan cricket?

An emotional, knee-jerk reaction would be to demand dismissals and retirements.

The prime target could be Misbahul Haq; the poor man has been labelled ‘tuk tuk’ and what not for his sedate batting style. Yet with all the other batsmen falling like nine pins around him does he usually have any other option left in his bare armour?

Rightfully so that Misbah has lambasted his fellow batsmen after their calamitous display in England. Pakistan cricket would be far better off with the likes of Asad Shafiq, Azhar Ali and Fawad Alam getting a long and consistent run in both formats of the game. Wouldn’t reliability and a bit of ‘tuk tuk’ serve us far better than the flashiness and style that lacks substance?

More importantly, when and how will this embarrassment of shameful flopping at the international stage end?

Is cricket in Pakistan heading in the same doomed direction of hockey and squash?

For the sake of all the old and wise men the Pakistan cricket board employs’, I seriously hope not!