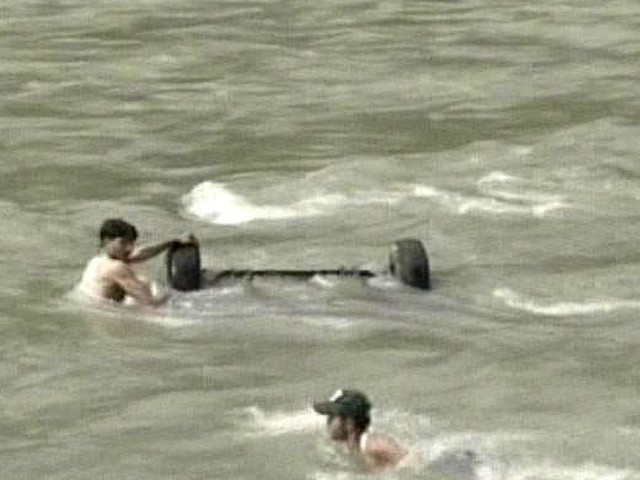 This is a story of a cruel, ruthless and heartless Pakistani system that has failed. And no elections can save it, without a major change. A mother in northern Pakistan jumped into a river where five of her children drowned after the management of a privately-run school sent them off in a crammed bus driven by the school’s gatekeeper, or chowkidar, who then drove it off a cliff.

Every once in a while comes a news story that makes your heart stop. And this is one of them.

Pakistan’s politicians can spend $11 million on a statue for a dead politician but have no money to spare for public universities paralyzed by lack of funds.

Forget democracy. Our politicians, who run our federal and provincial governments, can’t enforce discipline in schools, mostly run like supermarkets by the female relatives of politicians, retired military officers or businessmen.

In the sad story of the mother, from Garhi Dupatta in northern Pakistan, the school management saw it fit to cram 35 to 38 children in a mini-bus which went speeding across mountain slopes. The chowkidar was talking on his cell phone when he plunged into a ravine on Tuesday. He and four children survived while 32 precious little lives couldn’t make it.

Today there are some 40 families or more in one small area called Garhi Dupatta, probably many of them neighbors, mourning dead children because of a criminally negligent school. Would the owners of that school put their own children on that overcrowded mini-bus?

More importantly, would our civil administrators punish the owners of that school? In China, two owners of a company that made tainted milk powder that killed several Chinese babies were executed without mercy last year after a trial. Will we see the owners of that private Pakistani school even questioned for the life-threatening choices they made for the school kids? Not likely.

The federal railway minister seemed to think nothing wrong was wrong with introducing a little bit of humor into the tragedy. He publicly said at least the train didn’t come after the van driver on the street. This was his cute way of absolving his ministry of any responsibility.

Like everything else, school owners have become another money-driven cartel in the country. When the time comes for change, all of these cartels that hide behind the facade of democracy will have to be demolished.

Some politicians consider government to be their class right. Their own children study overseas while the children of ordinary Pakistanis die miserable deaths under different pretexts.

This is why a grand-scale, civil-society-led, and military-backed intervention to scrap a failed Pakistani political system will become necessary, eventually, when the time comes.

And when that time does arrive, we will want our military to take a strategic decision to snatch power from feudal democrats and usher in change with the help of talented and educated Pakistanis from the lower and middle-class.