Citizens of Lyari: Bloodied, miserable and begging for mercy 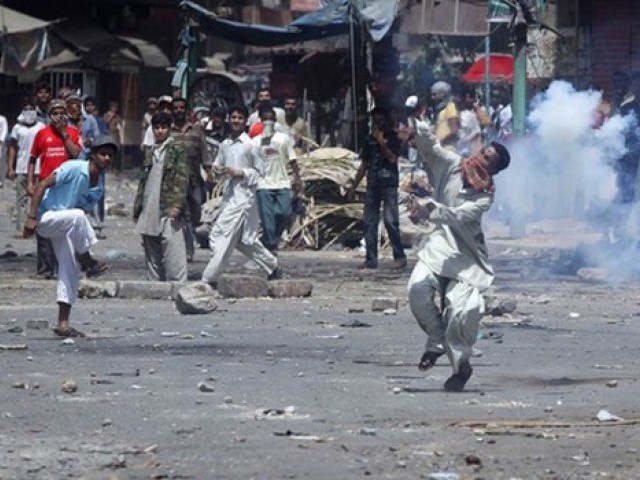 If the grenades keep exploding and the gunshots resonate on daily basis, the butterfly effect of this complete unrest may be something worse than we can handle – civil war. PHOTO: REUTERS

Ordinarily, Pakistan does not surprise me with the injustice that goes on in the country. I live in Karachi and am frighteningly used to instances of violence and bloodshed that the city is reputed for. The news, more or less every day, leaves me depressed, but for the past few days, my heart has been aching for what is going on in Karachi — especially Lyari.

In four days, Lyari has seen the concentrated essence of what we call ‘Karachi violence’. Four were dead as of June 10 and 18 had been injured even before the sun set. With a TV screen as the sole connection between Lyari and the rest of Karachi right now, it is becoming next to impossible to watch the news and believe that a part of this very city is suffering the most arid kind of negligence from the authorities. Yes, Rangers and the Sindh Police have not even penetrated the area fully.

A “gang war” sprung between the Kutchi Rabita Committee (KRC) and a local rival group after a man called Arif Baloch was killed on Saturday in Kalri. The rival group claims that the KRC attacked Baloch. In reaction, “unidentified men” opened fire in Hingorabad, Lyari, injuring four KRC workers. The KRC denied the allegation of Baloch’s killing. This episode resulted in a series of cross-firing between the groups of Lyari.

The question here is who is really bearing the brunt of this clash the most?

It is the innocent residents of Lyari, who are helpless as they watch their children traumatised by the deafening roars of gunshots. They have run out of food and have had to risk their lives to get flour and rice.

Residents of Lyari, teary-eyed as they spoke, told the media that they plan to relocate (like many others who have) and pleaded with the perpetrators to stop this madness. They claim that although seven Rangers pickets had been set by the peace committee in the area, there were no Rangers in sight to help stop the bloodshed.

The residential buildings in Lyari are riddled with bullets. The walls, like the people, are brittle from being shot at and attacked by grenades. Children cannot go to school any more without risking their lives.

Even during the elections, Lyari was given minimal to no coverage. It is a well-populated area and deserves as much efficiency of the media and law enforcement as anywhere else. Had Lyari been highlighted like NA-250, perhaps we’d have made worse discoveries about rigging and injustice than we did.

Yesterday, one man died and 20 others were injured in Lyari. Thankfully, it earned some attention from Muttahida Quami Movement chief Altaf Hussain, who said that such activities are promoting hatred and that immediate action should be taken by the government.

This area is a PPP stronghold and while PPP Sindh general secretary Taj Haider has condemned the attacks on civilians, I am sure the residents are looking forward to some action from them to put an end to their misery. Just using the word “condemn” to calm people down is not enough.

In its tenure, the PPP should have cleaned up Lyari of its drug, guns and extortion mafia. This says a lot about what lengths parties can go to for votes — what lenience they can exhibit for support.

Let us not forget the rest of Karachi, which has been experiencing sporadic bursts of violence throughout it for the past half week. What have these people done to deserve this? Is this what Karachiites get for a political awakening? Does associating oneself with the ideology of a certain party deserve this blood-drenched fruition. Affiliation with a party is the midpoint in the process to realising one’s responsibilities as a citizen. Bullets are not what innocents deserve for living in a certain area where issues between parties and gangs cannot be sorted out.

If grenades keep exploding and gunshots resonate in the city on daily basis, the snowball effect of this complete unrest may be something worse than we can handle – civil war.

I strongly urge the Sindh Police to own up to their responsibility and arrest these gangsters, who are also notorious for extortion and other crimes amongst other offences. 19 lives have already been lost as I write this.

The new government needs to address the citizens of Karachi, who are on the verge of losing their faith in any kind of system after having lost their loved ones to routine clashes. That is the least that can be done in this hour of need.