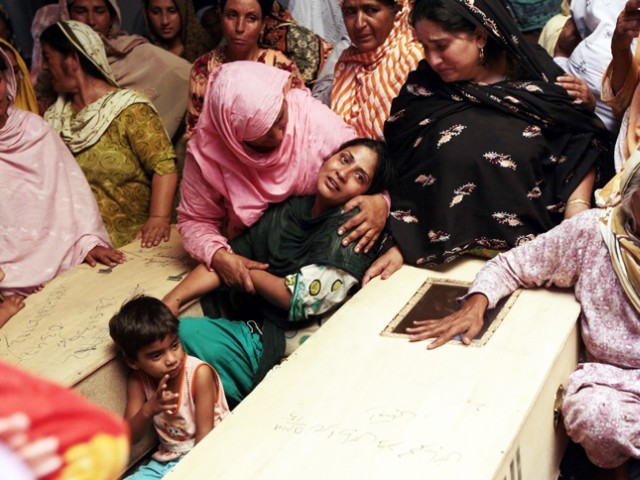 Families of the Gujrat bus tragedy victims mourn the death of their loved ones. PHOTO: REUTERS

(It is impossible to bear the pain of losing your children)

I have heard my father say this quite often. However, since I don’t have any children of my own, I never understood the intensity of emotions behind this statement until I visited the families of the children who lost their lives in the Gujrat tragedy.

A fire that broke out in a private school van took the lives of at least 14 innocent children and a teacher. My class had been instructed to visit these families by the director of our institute. On our way to Gujrat, we sat blissfully unaware of the scenes that awaited us.

With the help of the Gujrat DCO’s office personnel, we were able to locate the houses of the victims’ families. The first family that we visited had lost two young boys (an 11-year-old and an eight-year-old) in the fire.

As soon as the father entered the room, where we were patiently waiting, he broke into tears.

Later, after he gathered his strength, he narrated the incident. The eldest of the two boys had met him in the morning to bid goodbye and then had gently kissed his father while the younger one sat in a chair giving his father angry glances. He didn’t want to go to school. However after his brother and friend convinced him, he succumbed and so they all left.

After 10 minutes, news of the calamity reached his house and marking the end of these two innocent souls.

Families of the victims sit by the coffins. PHOTO: REUTERS/FILE

The second family that we visited had lost three children (one boy and two girls) in the fire. Their fourth sibling was currently undergoing treatment in a hospital. Unfortunately, the mother of these victims had also lost her younger sister in the tragedy. She was none other than the teacher, who had sacrificed her life in gallant efforts to save the others.

The mother sat quietly listening to our mentor. She would nod and reply at all the appropriate questions but refused to make eye contact. She would also smile every now and then but we could tell that she was broken inside. In a way, she was telling us that we will never be able to understand what she is going through and the truth is, she is right, we will never know.

One of the victim’s seven-year-old cousins, in an attempt to justify her cousin’s absence said,

(Brother’s school lesson is probably a long one.)

Another family had lost their son. The victim’s elder sister and four-year-old cousin were in the hospital. According to the victim’s father, his wife ran barefoot to the scene of the accident—stumbling her way to the van, but she was helpless. She stood there amidst the other vulnerable parents, watching and hearing the cries of their children.

Additionally, the father said that the family had people visiting them from all over the country. Amongst the families, one of the families (from Azad Kashmir) also lost three sons in a school bus incident.

The next house we visited had lost one young boy in the fire. His elder brother was injured. The deceased had told his grandmother a day before the accident:

(I will go to the school on my own but you will bring me back.)

This is exactly what had happened. They had to bring his body back home the next day. He never returned in the school van the way he was supposed to.

Furthermore, a house nearby that housed two families had each lost a child. There we met an eye witness to the whole incident. He termed the accident as “qayamat ka manzir” (a scene from the Day of Judgement).

According to him, the whole tragedy had occurred within the span of a minute but it seemed like an eternity.

He was standing on the side of the road when he saw the van slowly catching fire. But, as soon as the driver stopped, the vehicle burst into flames. The driver was able to make it out of the van safe and as soon as he got out, he called someone on the phone but soon after fled from the scene.

The lock of the main door of the van had not been working properly. Therefore, it had been secured from outside by a wire. If the driver had shown some presence of mind, and opened the main door from outside, many precious lives would have been saved.  Albeit, one of the children was able to make it out of the van by breaking the window’s glass with the help of a rod. This hero is only seven-years-old.

The last house we visited had been a home to three young brothers. They had all died in the accident. Their mother lay quietly in her room with little strength to even sit up. Her youngest son had just started school a year before. Within the span of a few minutes, her whole world had come to an end. We could not console her any way. We had nothing to say. We were speechless.

Moreover, this accident could have been easily prevented; these innocent souls could have been saved. They didn’t deserve to die due to the negligence of the authorities.

The government, school and citizens need to cooperate and work together to ensure the safety of vehicles that students travel in daily. The loss of these families is irreparable; no amount of money or sympathy can heal these wounds.