When Intermediate students must fight just to take their exams 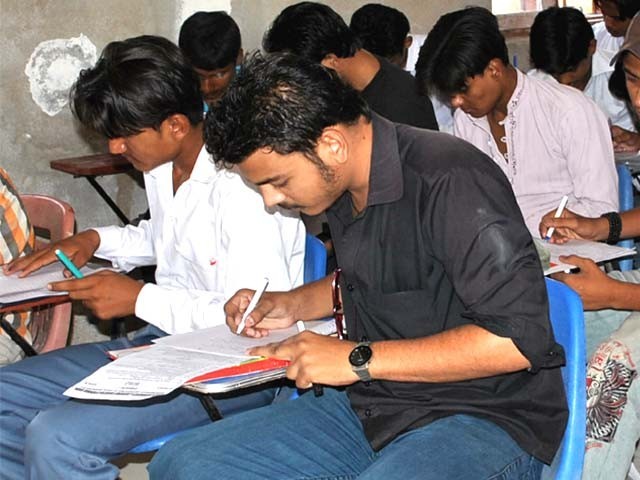 The only dim ray of hope visible is education, which is being denied by none other than the institutions themselves. Instead, they have made a mockery out of the system. PHOTO: SHAHID ALI

On Tuesday morning around 10am, with the sun in its full glory and waves of hot air making it impossible to stand outside, I was in the court room of the Lahore High Court awaiting my turn. As I stood there, I noticed teenagers, around 16-17 years of age, standing in the court room looking baffled.

I wondered what reason had brought them here as this was certainly an unusual sight. My curiosity subsided when the reader of the court called out a case and a crowd, including these teenagers, paced towards the rostrum. These children were students of FSc/FA/intermediate, fighting for their right to education guaranteed under Article 25-A of the Constitution of the Islamic Republic of Pakistan 1973; they should have been studying for their exam scheduled to be held on June 6, 2013, but they were forced to come to court to fight.

The lawyer representing the board in its defence stated that the said educational institution was given a period of almost one year to get the students registered with the board, despite which, the institution failed to take any action.

The representatives of the educational institution were also present and a plethora of accusations were hurled across the court room. Amidst this entire debacle, those innocent students stood there looking worried, least concerned with whose fault had brought them to court, silently awaiting their fate. Eventually the case was adjourned, with the following directions by the honourable judge to the representatives of both the educational institution and the board:

“The matter must be resolved before the exam, that is, June 6, 2013, otherwise the principal of the educational institution will be called to the court, and if he fails to justify his actions, appropriate proceedings shall be initiated against him.”

The next day, despite having no professional engagements, I was drawn to the same court room again engulfed by an overwhelming urge of wanting to know the fate of the students, realising that any one of those students could’ve been my own kith or kin – even me. I was disappointed because no concrete decision had been given, and once again, a direction was given to resolve the matter amicably.

The atrocity of the matter is the suffering of students due to the negligence of educational institutions that are established solely for minting money, playing with the careers of the youth. At the end of the day the authorities at these institutes walk out scot free, with fatter wallets, and the students are the ones to pay the price.

After witnessing the whole incident the only question in my mind was:

“Who shall be held responsible for such futile administration?”

Is it the student whose future is at stake or the parents who have paid exorbitant amounts of money to these educational institutions in hopes of providing a bright future for their children? Should it be the educational institution and governmental administrative authorities for whom education is just a business, who have failed to fulfil their obligations towards the students?

The answer is pretty clear.

The purpose behind the establishment of BISE by the government was to facilitate the students and further to administer the educational institutions which are affiliated with the BISE to provide all sorts of assistance and indemnity to students. This is not the first time that such an incident has taken place, and once again, the student was caught between the blame game played amongst the institution and the board.

We live in a country where the literacy rate is below than 50 per cent, and as a result thereof, we have suffered for past 66 years as a nation.

The only dim ray of hope visible is education, which is being denied by none other than the institutions that claim to be the platform for it.

Instead, they have made a mockery out of the system.