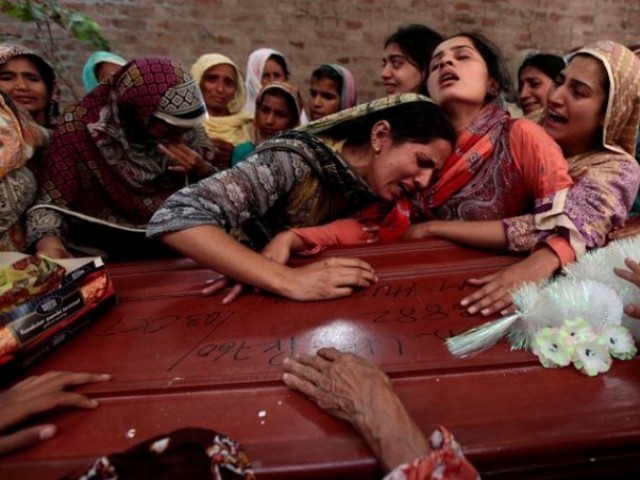 Unfortunately, in this part of the world, money is more important than human lives. PHOTO: REUTERS

Children, as young as three-years-old, travel long distances to reach their schools and that, too, in overloaded vans, pickups and rickshaws. Sometimes, unfortunate accidents occur, like the one in Gujrat a few weeks back, which shook the nation. Sixteen schoolchildren and a teacher were killed when their school van caught fire.

It is the responsibility of the schools to keep a continuous check on the vehicles their students travel in. They must keep a copy of the driving licences of the drivers and other documents of the vehicles. It is a fact that, at times, accidents are destined to happen despite proper maintenance but it must be ensured that there is no negligence on the part of the school administration and parents.

Following the tragic incident that took place in Gujrat, the government must take immediate steps to deal with such issues and vans without fitness certificates should not be allowed to operate. Parents should also monitor the situation themselves. If they find out that their child is unable to get a seat in one of the vans, they must complain to the school administration as it is the school’s duty to award contracts to operators who have a sense of responsibility. The chairman of the private schools association was also of the view that ever since the Gujrat incident, they must be more careful and get all vehicles checked to prevent such unfortunate occurrences in the future.

When vans are overloaded, parents must bring this to the knowledge of the school administration. If they do not do so, it can be considered as negligence on the part of parents. Undoubtedly, people in the transport business are greedy and do not want to spend money on maintenance of their vehicles. Often, they use single vans instead of two to save money. Like most other transporters, they increase monthly charges when petrol prices rise, even though they use CNG. Since the CNG pumps close down twice a week, most transporters use extra LPG and CNG kits, which pose great safety hazards.

Last but not least, the responsibility also lies with the traffic police, who should impose fines on overloaded school vans. Mostly though, traffic police let these van drivers off the hook after taking a bribe. Unfortunately, in this part of the world, money is more important than human lives.

Why can't we clean our streets and houses ourselves?