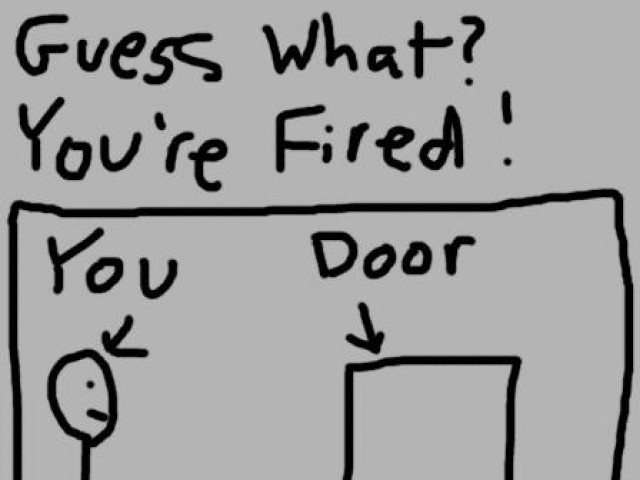 Being removed from a position can be a traumatic experience. How can you help you friend recuperate?

The global economy is in shambles. For those who have any doubts I recommend checking out the unemployment rate in the country and comparing it to last year’s. A large local media organisation recently fired a crop of employees. Luckily, as far as I know none of my friends were axed. None of them make enough money to warrant being firing – talk about market efficiency. But the incident got me thinking – how do you interact with people who have recently lost their jobs? There is no play book, so I have come up with several courses of action.

1. Leave them alone and party

Go out have a good time. Compensate for their unhappiness by having a particularly legendary time. Although this may be highly enjoyable and help you reduce the stress that they are going to be putting on your relationship with their whining and sulking, it may be a tad unkind. But there must be balance in the world. There is no point in two people being unhappy. Karma means balance. So if one person is unhappy, you should party just a little harder for that period of misery.

It doesn’t matter if that means spending a week at a 24-hour rave – man up and bring balance back to the universe! The probability of you feeling better is 100 per cent, your friend’s would be markedly less, but that’s the point of the balance.

2. Capitalise on their loss

Use your recently unemployed friend (preferably female) as a wing man. The pathetic aspect of their predicament will garner sympathy from the opposite sex. Chicks will also dig that you are blowing off a night of reckless partying to support your friend and hence you will score massive brownie points.

Find a nice place to for your poor sad, pathetic friend to relax and fume. Like a luxurious five star hotel spa. A nude meditation colony. A Thai massage parlor. And then of course tag along to provide some company in case your friend may be suicidal. Let yourself go as you enjoy the serene environment. Indulge in a spa treatment as a hot masseuse rubs oils into your aching tendons. Of course your friend is enjoying the break too.

(Disclaimer: Men don’t have a clue what women think or even a comprehensive understanding of what sounds they make.)

When the going gets tough, the tough make threats. Go to the source of the trouble – your friend’s boss and tell them your friend is on the verge of a serious mental breakdown. If they are not rehired everyone at the company may die strange, unusually painful deaths. Perhaps your friend has links in Blackwater and maybe members of the staff will be assassinated by mercenaries? Then there are your friend’s poisonous pet tarantulas Pinky and Bunty (tricky little buggers!) – if your friend isn’t rehired at double his current salary they may just find their way in to company headquarters. To show that you are serious kill the boss’s gold fish.