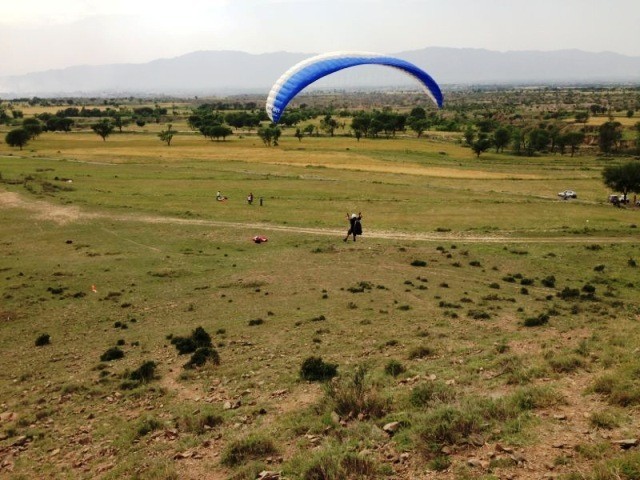 I did it! I was flying! PHOTO: OSAMA YAWAR

Paragliding is the simplest and purest form of aviation that fulfils the oldest dream of mankind that is ‘flying’.

Hunting for some adventurous sports, we (a group of office colleagues) decided to go paragliding. As paragliding looks risky to first-timers, we thought it best not to take the risk without first contacting professionals who could train us first and then lead us. After much research, we ended up at The Ultimate Adventure Club (TUAC).

The reason we chose TUAC is that it is one of the largest adventure clubs in Pakistan and has CE certified equipment. They have internationally trained instructors who guide and test you before your first flight to determine whether or not you are capable of taking the flight.

And that’s not all; they also have the cheapest rates I have come across so far! Charging Rs3,000 per person for the first flight and Rs500 for every next flight is not a bad deal at all!

The one thing that I want to highlight here is that, you have to make bookings in advance as TUAC can only entertain 25 people per day. So, for instance, if you are a group of more than 25 people then you have to ask them for special arrangements in advance, so they can provide the required facilities to accommodate each one of you. However, they don’t offer any discounted rates. We were a group of 15 people but when we tried to negotiate the price, they didn’t seem to be too pleased. That said the price is still worth the flight!

This is how it started…

We left Peshawar early in the morning at around 5:30am; we were directed to reach Khanpur around 10am. On arrival, we were greeted with a warm welcome by TUAC team and then asked to follow them as Khanpur was not the actual place of our stay. After a 20 minute drive, we reached a small village known as Mun or Maan (however you like to pronounce it) where we were going to start our adventure!

At first the members of TUAC gave us a detailed training session in which they enlightened us about the basics of paragliding. This lesson was very informative for first-timers as before listening to it, we were not even aware of how to tie the belts or hold the wires!

After the training session, the guides gave us a physical demonstration on the ground and asked each of us to try it once as well. According to them this would help us in our first flight that was scheduled from a mountain that was 20ft high. So after practising on the ground, we started hiking along with the wings towards the peak of the mountain.

On reaching our destination, I was the first one to go. I was excited and nervous all at the same time. I started tying up all the relevant belts and as soon as I got the go-signal, I stepped forward. My heart was in my throat at this point and I was scared to death but I kept running. Holding on to my belt tight, the guides were holding my arms and once they let go I was in the air!

I held on to the handles tight and followed all the directions that were communicated via the walky-talky attached to my safety bag on my back.

The 1.5 minute flight made my day!

I was so enthralled by the whole experience that I decided to go all out and I went a second time as well!

Though, it was not an easy job to climb the mountain for the second time it was completely worth it. I have never felt so free and alive in my entire life.

I would recommend everyone to go for paragliding at least once in their lives! It is the most thrilling and liberating adventurous sport I have ever tried.

Dear HEC, your degree attestation process is a nightmare