Baby 59: The newborn who was flushed down the toilet in China 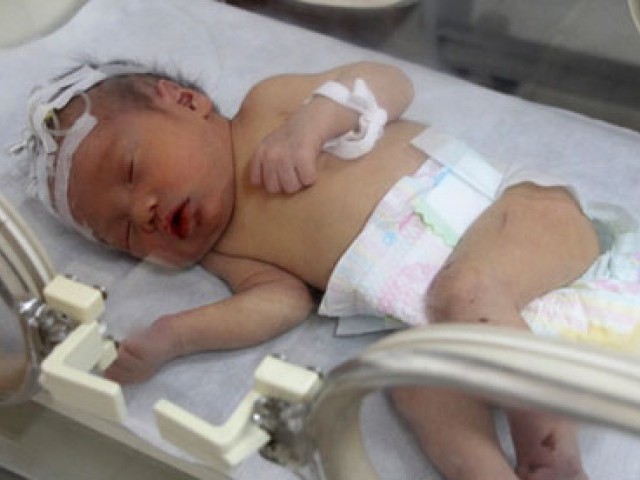 Baby 59 sleeps in his incubator after being rescued from a sewage pipe. He was flushed down the toilet by his unwed mother. PHOTO: REUTERS

They say there is no creature on earth like a mother frightened for her kids. The almost animal instinct to protect your offspring from harm is borne almost immediately inside a woman, along with her newborn. Whether it is an ape or a cheetah or a rat, all mothers are vicious when it comes to protecting their young.

Yet, as the perversity of human condition would have it, not all vicious mothers are well-meaning.

Every day the news bring cases that shake parents (and the non-parent reader as well) to their very core. Andrea Yates drowned her five children. Nina Koistenin, mother of nine, suffocated her own children because she felt she already had too many. A baby boy was left in the dumpster, wrapped in a pair of jeans, only to die a few hours later. Cassidy Goodson who ‘just didn’t want to get into trouble’ killed her newborn by suffocating it.

Statistics have alarming numbers of dead children at the hands of their own mothers.

With reasons ranging from simply exhaustion to severe mental breakdown, children under the age of five have died at the hands of their parents. The US Department of Justice concluded that in thirty years (from the 1970s to approximately the year 2000), mothers were responsible for a higher share of killing children killed in infancy. Latest in the series of just how twisted and ghastly a human being can be, a newborn baby was rescued from a toilet pipe.

A twenty-two-year-old single woman flushed her child down the toilet – and later watched in secret – as rescue workers attempted to extract the newborn from the L-shaped pipe after a neighbour reported the sound of a baby crying from the pipes.

The abandoned child has been named as Baby 59 after the number of his incubator. The child has a fractured skull and is being treated and cared for by the local hospital. Neighbours and locals are also offering help to adopt the baby and assistance in terms of milk and diapers.

The woman, in custody, reports that the incident was an ‘accident‘. She says the child slipped in to the sewer pipe and she couldn’t free him. She hid her pregnancy from her neighbours by ‘wearing loose clothes’ and wrapping her abdomen tightly.

The story seems unreal, almost farcical. However as graphic images flood the senses, as more links come forth about mothers who kill, as I read about the Chinese society and the strict censure they hold dear to, it seems more and more likely that there are more mothers out there who have chosen less public ways of getting rid of their newborns. The Chinese, much like the society that the subcontinent is known for, attribute high value to the birth of a male child. In societies where female infanticide continues to thrive (China, India, Pakistan), the social taboo and the expectation for mothers to produce male children continues to be a motivating factor for mothers abandoning their children. In the case of Baby 59, the young mother may have also been pushed to commit this heinous act by fear of shame and humiliation. In Pakistan there were over a thousand infants in one year that were left to die. Yet the crime of infanticide is rarely ever prosecuted.

The shame associated with being an unwed mother thus becomes another catalytic factor in patriarchal societies, when it comes to infanticide. In China, the society continues to follow many old traditions and celebrations despite the accelerated liberalisation that it overtly accepts as an ideology. It seems to have manifested itself only in the shape of designer handbags and skyscrapers. While women continue to work and participate actively in occupational activities, the Maoist rules of ‘hukou’ continue to exist where it becomes difficult for women to get residency permits in any given city if they do not have a male counterpart. Single unwed mothers in China not only have to face shame and embarrassment, they also have to face rigorous economic difficulties.

However, consequences of an unwanted pregnancy are not limited to China. In countries like the United States, teenagers often abandon or maim their children. The psychological basis of filicide (killing of one’s own child) and infanticide (killing of an infant) stems a variety of psycho-social causes. Most women who have killed their children have had history of mental disorder (manic-depressive or bipolar disorder) and post-natal depression becomes the final nail in the coffin that pushes them over the edge.

The lack of support system that exists for new mothers is also considered to be a factor for them abandoning or hurting their children. Studies suggest that if parents could be given more legal, medical, psychological and moral help in raising their children, such horrific incidences can be prevented.

Whether it is out of shame, out of misery or out of pure social stigma, the murder of an infant is not something that should be taken simply as a statistic. It is a social issue that needs attention and serious understanding. As a mother, the idea of a helpless human being, barely a few hours old, stuck in a toilet pipe with filth stuck to its skin, a fractured skull and a bleak future in sight, makes my heart break and tear and look at my own child in a new light. I appreciate my bond with him even more and when I kiss and hug him every bad feeling, every negative idea, every heartbreaking image goes away. I look into his eyes and I tickle him and a tremendous amount of joy floods my heart like a tidal wave.

And somewhere in China, a mother has no idea what this feels like.