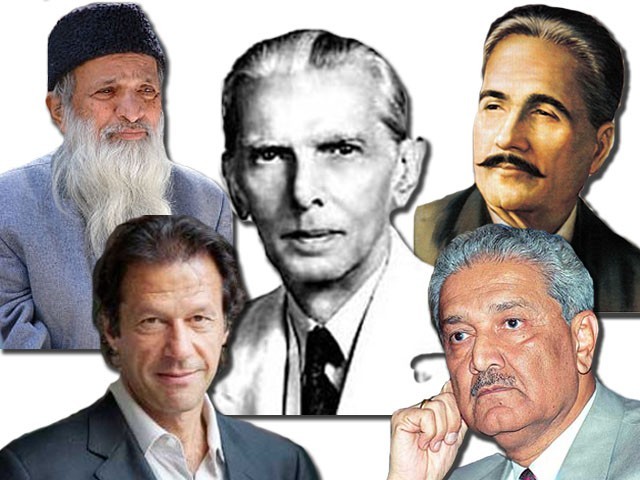 Now, for just one second, sit back and imagine either one of them not being there, just imagine!

Ever wondered what the butterfly effect would be if one person who helped shape history was not there in the chronological time line?

Without Abraham Lincoln and Winston Churchill, America and Britain wouldn’t be the same today. Had Martin Luther King died before making the “I dream of a day” speech, who knows how African Americans would be treated today.

Pakistan has also seen its fair share of inspirational people. They provide not only hope to Pakistan with their actions but also provided dignity with their thoughts and stance.

I have a list of five names whose presence is so fundamental to Pakistan’s chronological existence that the mere thought of them not existing gives me the chills!

The founder of Pakistan at the start of his professional life wasn’t even interested in politics; he was just a big time lawyer making a lot of money. Even after he started developing an interest in politics, he started with a party that didn’t even represent the Muslim interest!

The funny part is that even when he joined a party representing the Muslims interest, there came a time when he was so hopeless that he went into voluntary exile. It was Allama Iqbal’s encouragement and motivation that persuaded him to come back and become the face of the movement that was to make a dent in history and reshape the map of South Asia.

At this point, it would be safe to say that if either one of his decisions had gone wrong or turned out differently, I would not be writing this and you would not have been reading this — at least not in a free country!

They say he’s a self-less philanthropist and I think the world at large would agree. His actions have bought relief to millions. Starting with just a minor dispensary he has come a long way with the Edhi Trust and Foundation. Edhi currently runs the biggest ambulance service in the world along with rehabilitation centres, old age homes and maternity homes that house and care for thousands and thousands of infants, orphans, elderly and distressed women in need.

His goodwill and honesty stand out so remarkably amongst the public that even in his own words:

(I spread my sheet of cloth and money comes itself)

Given the reputation we have gained over the years, crediting a Pakistani with so much trust is not an ordinary deal. Abdul Sattar Edhi’s work has been so outstanding in the cause of humanity that the prime minister, in an attempt to salute him for all his extraordinary work, even recommended him for the Nobel Peace Prize.

Whatever his motivation may be for all the humility and humanity that he has bestowed upon the people of Pakistan, had he not been doing what he did there would be at least a million, additional, helpless people in this world, maybe more.

Our elders have always maintained that we should read Iqbal’s poetry and I do agree. Yet, like many other youngsters, I have probably only heard three or four of his quotes or stanzas but his words still manage to motivate me. Allama Iqbal is very inspirational, thought provoking and relevant today. Now imagine how such poetry affected the adrenaline-pumped youth, belonging to a time of suppression and frustration?

Iqbal’s words must have inspired them and mobilised them beyond anything else.

Had Allama Iqbal doubted his vision or if he had any less conviction in Jinnah, I am pretty sure we would still be taking inspiration from the likes of Shakespeare.

I am sure each one of us has experienced the humiliation of being bullied at least once in our lifetime. The common conclusion would be that it does not feel good. Now imagine just how brutally Pakistan would have been bullied if it weren’t a nuclear power.

One man helped us stand tall and brave in front of many intimidating nations. He helped us ward off bullies who thought we wouldn’t fight fire with fire. Abdul Qadeer Khan and many like him left high designations and reputable jobs around the world when they heard the then prime minister Zulfikar Ali Bhutto’s call for Pakistan’s own nuclear program in response to the Indian nuclear weapon testing 1974.

If people like Abdul Qadeer Khan had not been there when we needed them to be, Pakistan would not have had that many constituencies to contest elections in, if you know what I mean!

Khan’s undying conviction is all that we need to know about him – and no I am not talking about his political persona. That remains to be seen still. I am talking about the three big things he has done up until now starting from winning the World Cup, founding an entirely non-profit specialised cancer hospital in Pakistan and establishing a university, affiliated with an international university, in a rural area.

Now come to think of it; Khan managed to accomplish all these feats in a time when all the odds were against him. He came back from retirement to win the World Cup for Pakistan, when he started the hospital project all the doctors were convinced there couldn’t be a specialised non-profit cancer hospital in Pakistan and making a university, with an internationally renowned university affiliation, (again non-profit) in a rural area is unheard of in Pakistan.

What inspired me and convinced me further of his zeal was what he said in one of his interviews;

“You can either be a realist or an idealist. If you are a realist the first thing that would come to your mind would be to not do a thing that does not have good odds.”

His contributions to Pakistan have been vital.

In his case, it would not be farfetched to assume that had he not been around or had he succumbed to the odds against him, we would not have a World Cup trophy to our name today; we wouldn’t have a state-of-the-art cancer hospital or an internationally affiliated university in the rural areas of Pakistan (all these being a first of their own kind in Pakistan).

It is people like the ones I have listed above who make it worthwhile to look back at what all we have accomplished.

There is a little bit of each of them in every Pakistani. The one thing that all these magnanimous figures have in common is that their life and death is for Pakistan and its people. Now, for just one second, sit back and imagine just one of them not being there – just imagine!