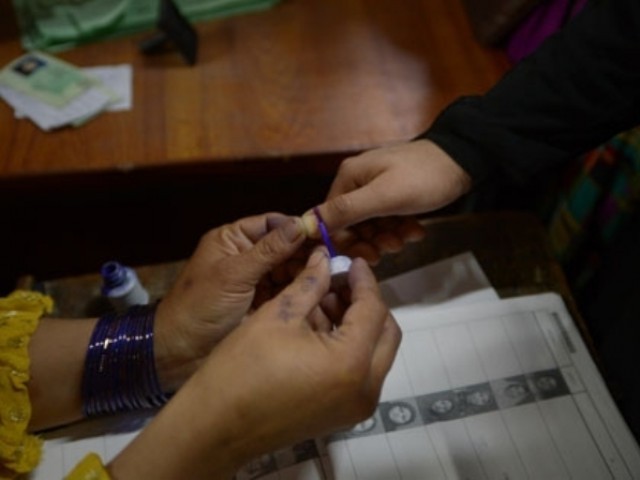 If I can track why I chose to cancel my vote, there will be more than a hundred questions in my mind, as to why I reacted that way and there is no right answer. PHOTO: AFP

You know that awkward personal moment right after offering your prayers, when you are supposed to say a dua, ask for something and you really can’t come up with anything. So you say, “Allah Mian, you know what I need”, before wrapping up the janemaz.

My voting experience could not have been any different from this; it was pretty much like saying my Namaz. Until that awkward moment arrived.

Suddenly the most attractive box on the ballot papers was the last one filled with horizontal and vertical lines. I thought “well isn’t this representing how I feel? Aren’t we a nation caught in between white noise for too long?” None of the signs, the names of the candidates seemed appropriate, they just didn’t represent me.

Like I would conclude my prayers with “Allah Mian, you know what I need”, I thought, maybe putting the stamp on any name should make sense, all of these political parties and candidates who chose to nominate themselves as the next caretakers of the country should know their duties too. They should know what citizens need.

But the pessimist in me just suppressed these thoughts and I cancelled my vote.

I can be judged for doing so, for not using my right and not making up my mind on the lesser evil. Socially too, I felt the divide, right among my friends, where I was probably labelled as less intellectual than them, mostly for not choosing the Pakistan Tehreek-e-Insaf (PTI.)

I couldn’t have been more discreet in my choice.

Two weeks into the elections, all I can see and hear on TV and roads are dharnas and more dharnas from the major political parties in Karachi, reaffirming my view that the leaders are still immature.

Despite the results of the elections, rigged or not, they can’t put the people first. For now it’s more about trolling and bashing anyone you find holding a different opinion than yours.

I learnt in university that a bad democracy was better than the best dictatorship. The good thing maybe is that the elections exposed us as a nation.

I’m more concerned about the general intolerance among the liberals, conservatives and the moderates. However, we fail to see as a nation that democracy is not an option anymore. It’s the necessity for all the players involved.

If I can track why I chose to cancel my vote, there will be more than a hundred questions in my mind, as to why I reacted that way and there is no right answer.