Beckham: An extraordinarily charismatic but, at most, an ‘ordinary’ player 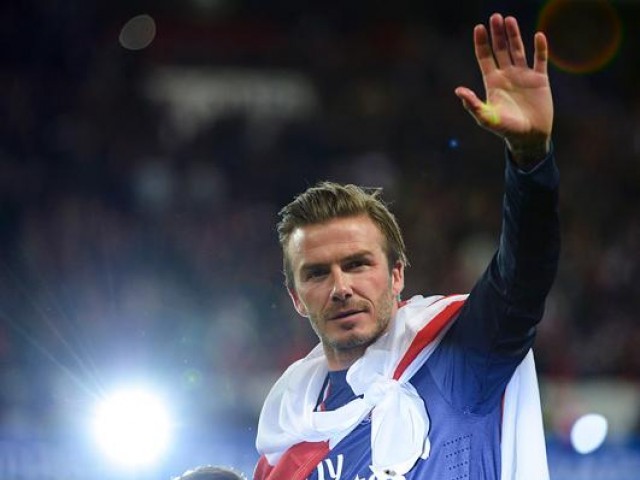 He became famous because of his personality and smart marketing and not his footballing. PHOTO: AFP

David Beckham has finally drawn curtains on his glamorous 21-year career. Notice the word “glamorous” in my opening sentence and the absence of a single word about football. I won’t shy away from saying I did that on purpose because the notion I’m going to present in my piece here is something that has divided the opinion of the footballing world throughout the glittery career of the former England captain.

Have you ever wondered what would happen if Imran Khan didn’t look like he did or didn’t have a charming personality? Would he still have the crazy fan following that he has today? I think not.

He obviously won the World Cup but that should have nothing to do with his political following. It’s the personality. It’s the class the man oozes.

Beckham, in my opinion, is a replica case.

May 18, 2013 at Parc des Princes stadium in Paris. It was his last home game before retiring. PHOTO: AFP

As an icon, you cannot question the former Manchester United right winger. You’d probably see your children being narrated case studies on Beckham’s life in their public relations or marketing classes in future. But when it comes to listing down the reasons for his unbelievable popularity all over the globe, very few of them would be talking about this ability in football and hence, the tag “overrated.” Let’s start from the beginning. Beckham emerged as one of the prodigies in the famous generation of Manchester United wonder kids that manager Alex Ferguson unleashed in the footballing arena during the mid-90s. He was part of what they called “Fergie’s Fledglings” of the 90s that included the likes of Nicky Butt, Ryan Giggs, Phil Neville and Paul Scholes among others.

If this group was to line up together, it wouldn’t be difficult to pick the odd one out. Yes, the Backstreet Boys-like, blonde, handsome, young man, who’d be an instant hit if he ever acted in a movie – David Beckham. Not sure if you would describe Giggs or Scholes in the same breath as him in terms of looks.

If you were to list down Beckham’s distinct footballing abilities, you’d instantly mention his immaculate crossing, set piece delivery and an undying appetite and work rate. He was by no means a sprinter and certainly not a prolific goal scorer.

He probably also had Gary Neville to thank for the success he had at United considering the brilliant partnership both formed on the right wing. Point being and every football fan would agree that he was never a footballer of world beating ability.

This, by no means, implies he wasn’t a good footballer, because he certainly was. However, no way was he so good that he would become a man whose current earnings stand at $46million making him the world’s eighth highest paid athlete in the world, according to Forbes.

He has indeed won lots of honours – 6 Premier League titles, 2 FA Cups and 1 Champions League with Manchester United, 1 La Liga title and 1 Spanish Cup with Real Madrid, 1 French league title with PSG. However, the one common factor you’ll notice with all three clubs that he has won with is that those sides were full of world beaters. He was always lucky to be in brilliant teams that ought to win major trophies with or without him!

He had 115 caps for England, the most for an outfield player, only behind Peter Shilton but what did he win with them?

Nothing. Zilch. And the reason was simple. England was never a great team. Similarly, during his stint at AC Milan, he managed to win nothing with an ageing, struggling team. As for MLS, I wouldn’t bother mentioning it in detail because, well, it was MLS (no offence meant here!)

So why didn’t the likes of Giggs or Scholes, who were far superior in ability ever see their popularity and commercial value escalate like Beckham’s? David Beckham presents his autobiography "My side." PHOTO: AFP

His X-factor, personality, charm, kindness, gentleman nature, career moves as well as personal moves were all spot on and that lead to his unbelievable popularity. He was a golden boy for every team. He’d bring billions from shirt sales. He was a commercial jackpot for every club he was at. However, he was never an exceptionally talented footballer. He was never a world beater who gained his popularity purely based on his foot balling talent. As a footballer, he was just ridiculously overrated. To sum up, this is not a hate post. Criticising Beckham does feel wrong as he was essentially a very nice human being but that shouldn’t overshadow the fact that he was hardly a world beating talent, who made more bucks and became more famous only because of his personality and smart marketing.

For me, Beckham was to football what Andy Roddick was to tennis. Take out his serves and his personality out of the equation and he’d just be an ordinary athlete ala David Beckham.

Roll on the abuse!