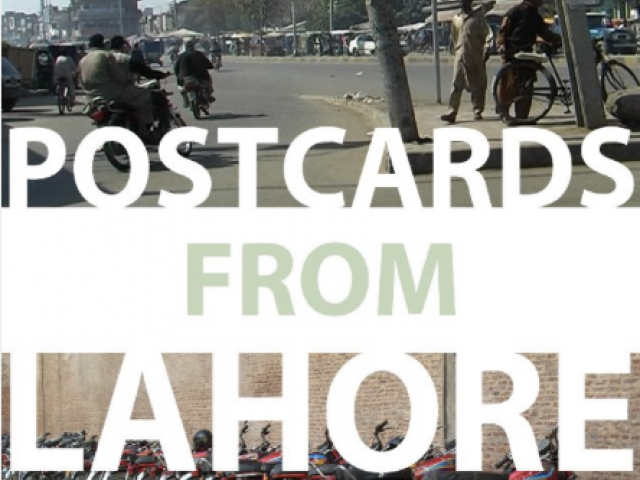 The film was screened at the 2012 Raindance Film Festival, the Pakistani High Commission in the UK and was awarded an Honourable Mention at the Los Angeles Film Festival 2012. PHOTO: https://www.facebook.com/PostcardsFromLahore

And so begins the British-Asian and London-based filmmaker and comedian Aatif Nawaz’s documentary-film, ‘Postcards from Lahore’, that has come to be the only Pakistani film to be shown at the prestigious Cannes Film Festival 2013.

Narrated by Aatif himself, ‘Postcards from Lahore’ centres not just around a young man travelling 7,000 miles back to his hometown after 17 years to recreate his memories but to revisit every shade of colour that comes together to make the vibrant composition that is Lahore.

Be it its rich historical and cultural heritage whose grandeur is redrawn vividly through the anecdotes of an 86-year-old Jameel, one of Lahore Fort’s tour guides; a taste of its streets; the warmth of its people; their love for sports and of course, good food!

Aatif’s comedian wit is often heard in his candid commentary as he tours Lahore, from the city’s fringes to its modern constructional erections that are the numerous shopping malls and plazas.

The documentary also includes a tidbit about how the security situation in Pakistan has affected the city and how it is much lamented.

His experience in Lahore and trying to re-bond with his roots in ‘Postcards from Lahore’, in Aatif’s own words is “a foreigner’s love-letter to the city of his origins”.

It truly is a love-letter that explores every feature of beauty of the beloved city that is the throbbing heart of the country: it’s life, diversity, past, people and culture.

The film was screened at the 2012 Raindance Film Festival, the Pakistani High Commission in the UK and was awarded an Honourable Mention at the Los Angeles Film Festival 2012 among several other honorary mentions and awards at the festival circuit.

We’re proud of Aatif and heartily congratulate him on the documentary’s success!