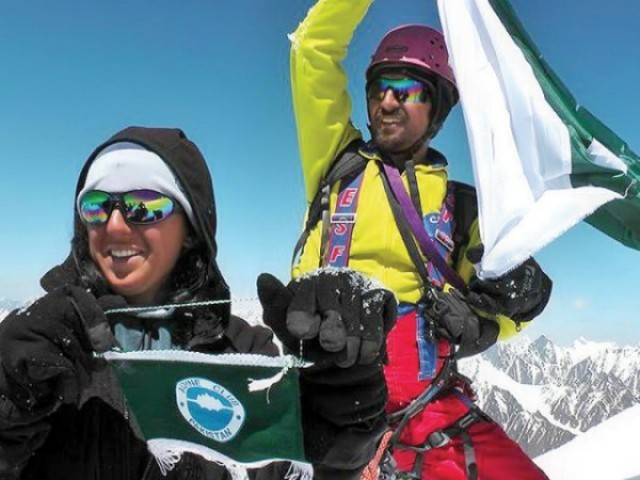 Amidst the hue and cry about rigging in elections, the political topsy turvy and the mercury rising and crossing the boiling point, there comes good news for Pakistan. Samina Baig and her brother Mirza Ali made history by climbing the world’s highest mountain Mount Everest without using supplemental oxygen.

It is also a moment of great pride not only for Pakistan but also for India and all those who want peaceful relations between both the countries, as Samina and Mirza had in their team two Indian twin sisters, Nughsi and Tashi.

All four of them were aiming to hoist the Pakistani and India flags together at the summit and spread the message of peace and friendship.

The expedition kicked off from April 1, 2013, and ended on 19 May, 2013, at 7:40am. Samina became the first Pakistani woman mountaineer to scale an eight-thousander, and her brother Mirza Ali became the third and the youngest Pakistani male to summit Mount Everest (8848 metres).

It’s a proud moment for Pakistan and India both, so let’s forget all the differences and unite to celebrate this historic moment. Let’s also hope and pray that this news will bring new life to the dying tourism industry of Pakistan.

Our country possesses plenty of potential tourist attractions, from fine examples of Mughal and Buddhist architecture to some of the world’s highest mountains. We have snow-peaked mountains and vast deserts where people live in a fascinating, rich culture. However, in recent years, convincing foreigners to come visit Pakistan has been an uphill battle. To tempt people from other countries to visit Pakistan would be more difficult today than to outline a workable peace plan between Palestine and Israel.

The government has to take special measures for providing relief to tourists if it wants to boost the tourism industry in Pakistan. It is quite possible to attract foreign tourists to our beautiful Northern areas once again if government shows its interest and will. Only a little bit attention of on their part can make this country once again a hub of foreign and local tourists, and eventually this can make Pakistan economically well.

This positive news will send a good message to all those who want war and not peace between India and Pakistan. If four people from these two countries can scale the towering, mighty Mount Everest by uniting, there is no telling what we can be capable of in uniting on a larger, international level.

I would like to congratulate both the siblings on this wonderful achievement. Pakistan is proud of you! Keep making history and bringing many more positive and proud moments for this nation.

A Lahore based amateur photographer with a Master's degree in Mass Communication and English Literature, Daniyah is a freelance writer and tweets as @DaniyahSehar

Alpine Skiing and the two Pakistanis who made a new record!

Lessons for life: A letter to my beloved daughter

What war does to women