Disney World the Korean way: The magic of Lotte World! 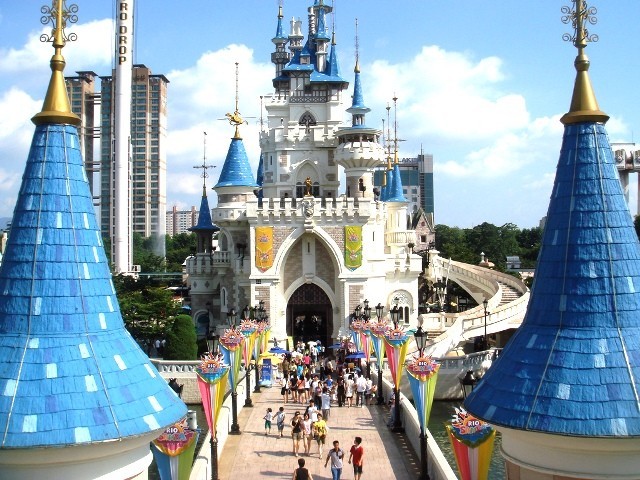 There stood the Magic Castle, more or less a replica of Disney's famous Magic Kingdom. It was a sight to witness! PHOTO: PUBLICITY

“I don’t want the public to see the world they live in while they’re in the Park. I want them to feel that they’re in another world.”

This approach made Mr Walt Disney come up with the idea of Disney World, a place I always wanted to visit but couldn’t. Little did I know that South Korea had a surprise in store for me in the form of “Lotte World”, or as I like to call it, the Korean Disney World.

Being someone who has not let go of her inner child, I was more than happy to discover Lotte World. I just couldn’t let this opportunity slip without availing it! So there I was with my husband on a fine, magical morning in Lotte World. We opted for the “whole day pass”- obviously!

As usual, being a foreigner had its perks- this time in the form of discounted ticket prices (Won 28,000 each). What a wonderful start to a fun-filled day!

Lotte World is divided into two parts- the indoor part referred to as Adventure Land and the outdoor part known as Magic Island. We entered a world full of fantasy and magic that only had room for imagination. It was breathtaking!

We started our adventure with the indoor area, which was aptly decorated according to a theme of the approaching Halloween. This indoor part of  Lotte World is known as the largest indoor amusement / theme park in the world. Apart from being huge, each of its four floors has a new story to tell and new joys to explore.

As we were walking through the “Mini Europe” section on the ground floor, catchy music beats caught our attention and we walked in the direction of the music; this led us straight into the centre of the indoor arena. Lucky for us, the Halloween day parade had just started. I could see all the characters coming up, one after the other, dancing to the peppy theme song. There were joyous faces and dancing feet all around. It was truly magical!

After the parade, we continued with our indoor tour. Mini Europe, tomb of horror, the adventures of Sindbad, water slides, bumping cars, concert area, fantasy forest, hot air balloons and what not. I couldn’t seem to get enough of it.

Though we explored all the areas, we skipped most of the rides because of my motion sickness.

However, I did take the Euro Rail tour. It is a mini rail on the second floor, which gives you a circular ride of the indoor area. What you see from there is an astounding view of the whole indoor section along with the ice skating rink in the basement. It just couldn’t get better than this!

After the indoor area, we left for the outdoor area, to make the most of daylight. The moment I entered this place, appropriately named Magic Island, I was spellbound. There stood the Magic Castle, more or less a replica of Disney’s famous Magic Kingdom. It was a sight to witness.

We kept roaming around the castle – in and out – taking pictures. After a while, we finally moved forward. The rides in Magic Island were extremely scary and I just didn’t have the guts to try them. So we skipped them and experienced the lighter parts, such as Snow White’s castle and Geneva cruise lines.

Geneva cruise line is a mini ferry ride that took us on a tour of the lake that surrounds Magic Island. This lake tour not only showed us the milestones of Magic Island, but also allowed us to see parts that we may not have seen otherwise.

With a promise to return back to witness the island when the lights turned on at night, we went inside to complete the indoor tour. The upper-most floor is the place that distinguishes Lotte from Disney world. It is dedicated to the Korean Folk Museum.

This museum takes you for a journey through South Korea’s stone ages to the revolutionary and literary days, all the way down to the present. It’s huge and absolutely magnificent. Also, over there I witnessed a traditional Korean wedding. The memory still brings a smile to my face when I recall it. I couldn’t have asked for more!

It took us a whole hour and a half to get through the museum and by the time we finished, the whole of Lotte World was sparkling with lights.

Keeping up with the promise we had made earlier, we headed towards Magic Island again. It was sheer bliss to see how lovely it looked. Words alone can’t do justice to how I felt in that moment. We strolled around the area for a while and then went in for the day end parade.

Although we skipped the laser show that is demonstrated late at night, our day trip ended on an ecstatic note, giving us memories that we would cherish for a lifetime.

Being someone who loves to travel, I intend on visiting and narrating many other wonders that South Korea has to offer! But to all my fellow Pakistanis, who are either living in or plan on visiting South Korea, Lotte World is a must visit. No matter what time of year it is, the availability of both indoor and outdoor premises is a guarantee that you will have the time of your life. Make sure to carry your foreign cards or passports along to avail the foreigner discount. You won’t regret it!

A freelance writer with marketing and administrative experience in some reputable companies of Pakistan. She is currently residing in and discovering South Korea.