My grandfather died two days after casting his vote 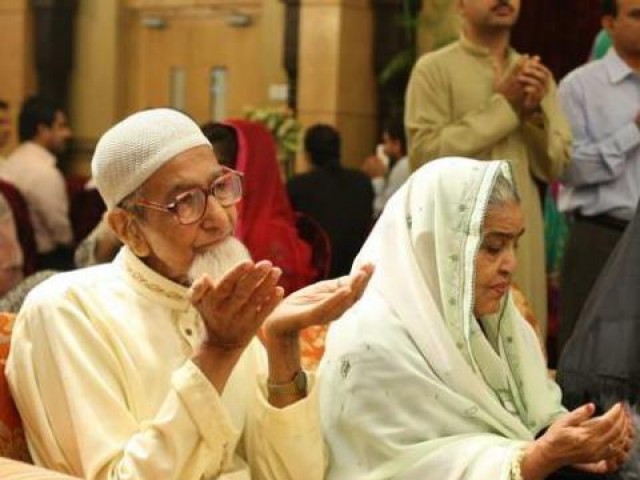 On May 13, 2013 my maternal grandfather Abdul Majeed, died at the age of 85. He was suffering from Chronic Obstructive Pulmonary Disease. (COPD). As a result of this illness his lungs were not able to function properly and fill in the required amount of oxygen. This became the eventual cause of his death.

Not only was he bedridden and totally immobile since late March, he had been finding it increasingly difficult to breathe since the beginning of May. However, despite his condition, he actually took the trouble, fought severe pain and found the strength deep inside him to get up and vote.

His polling station was Government Shipowners’ College in North Nazimabad. His sons carried him to the car, hoping that the security would allow them to park inside and then they might be able to carry him to the polling booth. But as suspected, the security personnel refused to let the car enter the polling station. At this point, my family had given up. My dejected uncles told my grandfather that it was impossible for him to vote, but, he thought otherwise.

Without any deterrent in his intent and spirit he emphatically told his sons that he simply has to vote.  Upon hearing this, the security personnel told them that a lady on a wheelchair had gone inside to vote and they might be able to ask her for a favour when she returned. They did as they were told and the youth made way for him. Now, to cut the story short- my grandfather voted.

Just two days later, he passed away, but went with the peace of mind that he had cast his vote for a better Pakistan for his grandchildren.

It is important to understand here, the amount of pain nana must have endured on Election Day. Just the thought of it gives me goose bumps. For some, the fact that my grandfather voted might be ordinary and nothing unusual, but I can assure you that it was a tremendous effort on his part and was truly inspirational.

Sometimes I wonder whether it was the passion to vote that kept him alive till the elections, but I’ll never know.

After election day, he felt sicker than before; the effort put in and energy spent to vote got the best of him. Initially, I thought of asking one of my family members if they knew who he voted for but then I realised that it doesn’t even matter.

He voted, and that’s all that counts.

I know that nana had an idea of ‘a change’ and he must have staunchly believed in somebody to the point where he risked his life to stamp a ballot paper.

At the age of 85, he still believed that a single vote could bring about a change; living in North Nazimabad he ought to very well know the dangers surrounding this procedure, but that did not stop him from voting.

Furthermore, I personally believe that he must have had some sort of an idea that he wouldn’t be around to vote the next time around, or he might not even live to see the elected government’s performance but that didn’t stop him from casting his vote either. I am fairly certain he voted for his posterity – for a change that Pakistan deserves. He could have easily turned his back on Pakistan two days before his death but he chose to give it one last shot, in case it mattered.

If a person on his deathbed can be so optimistic about Pakistan do we, who might have decades ahead of us, have any more legitimate and rational reasons not to want the best for our country?

So if you live in NA-250 constituency or anywhere where there might be re-polling do not even think of snubbing the re-election. Go out again and use your vote! It may or may not affect the overall outcome, but you would have still played your part in bringing out the change that you so desperately desire.

Re-vote, because we owe this to Pakistan!

An Australian based Pakistani, who happens to be a jingoist. He feels agitated about the ongoing melancholic and ever deteriorating state of Pakistan. He tweets @ahmedbaig85

Are overseas Pakistanis any less greener?