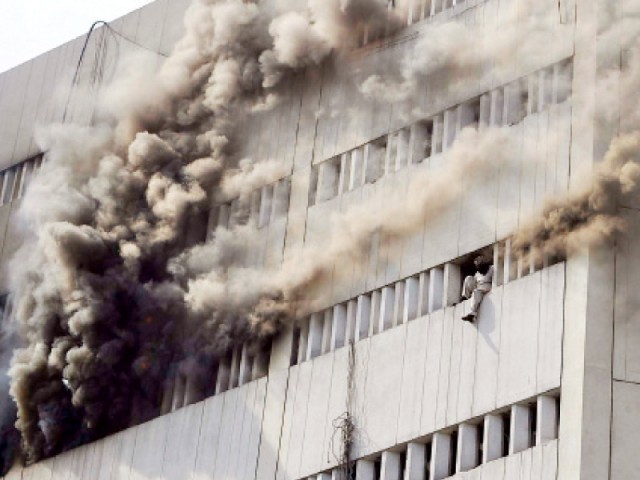 The rescue department simply did not have the infrastructure to extinguish a fire of this scale. The workers worked day and night and still many lives were lost. PHOTO: SHAFIQ MALIK, ABID NAWAZ/EXPRESS

It was our first day back at school after the election holidays. Everyone was anxious and impatient to share their stories. Amidst the rowdy crowd, my classmates and I sat in a laboratory and exchanged our political views on what had happened and what could have happened when we noticed something strange.

One of my class fellows, Jehan* sat next to us unusually quite. She lived on campus and had gone home to cast her vote during the holidays. Her abnormally silent behaviour worried us, so we asked her what was bothering her. Upon our inquiring, she said that the last few days had been very tough for her family. She had lost five family members – both distant and close – in the fire that consumed LDA’s building in Lahore.

One of the victims was her first cousin who was like a brother to her, related Jehan. This cousin had lost his parents at a very early age and he had the responsibility of taking care of his siblings – a duty he performed well. He was married.

Thus, not only did Jehan lose her cousin, a wife lost her husband and companion in the LDA fire.

According to Jehan, her cousin was in a meeting when the fire broke out. My friend assumed that he died of suffocation as he suffered from asthma, but all that was found of him was his lifeless body on a chair. His face was charred beyond recognition; he was identified by the tag on his shirt and was later confirmed to be indeed, Jehan’s cousin, by the distinctive way in which he kept his money in his pocket.

She tearfully related how just one of her family members that worked in the LDA building was able to make it out alive. As this lone survivor and another relative of Jehan’s made their way out of the torched building, they were reminded of the cousin they had left behind.

One of them went up to get him and never returned.

For my friend, the last few days were nothing less than torture.

The bigger tragedy, however, is that nobody is bothered. Imran Khan’s fall and the alleged death of PML-N’s white tiger took precedence over a fire that raged for over 36 hours and reportedly claimed more than 23 lives.

News channels have been flooded with updates related to elections and little attention has been paid to the LDA fire. No questions have been raised as to what triggered the fire and the victims have not been consoled.

My friend, and what remains of her family, have been following news channels with growing frustration, clinging on to every piece of information that comes their way. They have been particularly infuriated by the prompt announcement of the amount of money that will be given to the victims’ families as compensation.

Truth is, money cannot bring back a person from the dead. So who cares? These families need more than financial compensation, they need closure. They need to know the truth of how it happened, why it happened and who made it happen.

Jehan’s brothers, upon hearing the news of the fire, had rushed to LDA plaza to rescue their cousin and other family members. The scenes that were narrated to us were horrifying to say the least.

The rescue department simply did not have the infrastructure to extinguish a fire of this scale. The workers worked day and night but still many lives were lost.

Another junior university mate of mine lost her paternal uncle in this incident.

These were not the only victim here. When my Jehan’s brothers had gone in to retrieve their relatives’ bodies, they had seen over 40 bodies lying around in the room- all horrifically burnt, and that was still the story of a single hall. Just to think that LDA has many such halls sends shivers down my spine!

We were all surprised to hear this as reports on the media had quoted the death toll of around 22. The death toll appears to be under-reported and this is grossly unsettling to all of us; it definitely brings the credibility of the media in question.

Following the tradition, those in authority have demanded an inquiry report, and the issue has been dismissed but we have been left with many questions.

Are we being misled by the media?

Will we ever get to know who was responsible for this incident?

What were reasons for downplaying the extent of loss in the incident?

And the most important one of all: