A Thai beef salad that will leave you wanting more 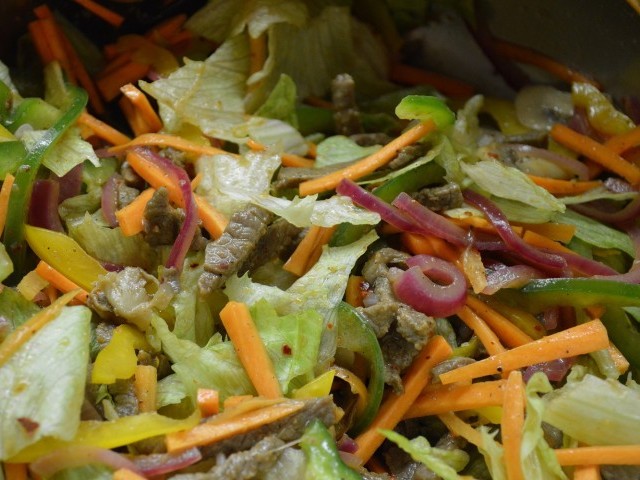 It's a full meal in itself if served with crackers or garlic bread. PHOTO: NIDA WAQAR

I’m sharing with you all the recipe of a delicious and aromatic salad – a refreshing change from the mayo loaded salads or the typical mixed vegetable salads we have on a regular basis. It’s a full meal in itself if served with crackers or garlic bread.

Here is what you will need.

Red chilli flakes, according to taste

Julienne all the vegetables and slice the mushrooms thinly. Don’t cut the lettuce; just rip it with your hands into medium sized chunks.

Take 1/4th cup vinegar and half a cup of water and bring to a boil. Add the onions. Once it gets boiling again, take it off the flame and drain.

Slice the beef thinly in julienne style strips. Its best to slice beef when its semi frozen as it is easier to handle and you get evenly cut pieces.

Heat one tablespoon of oil in a frying pan and fry the beef on a medium flame with some freshly ground pepper and salt.

Stir constantly for even cooking. Throw in the mushrooms after three minutes. You don’t need to add any water because the beef is cut really thin and the moisture of the beef itself will be enough to cook it through. Overcooking will make it tough and leathery. Take it off the flame as soon as its dried up and has an evenly browned look.

In a bowl, heat up two tablespoons of water and dissolve the sugar in it. Add the rest of the ingredients for the dressing and whisk briefly.

Add all the ingredients of the salad in a mixing bowl and pour the dressing on top. Season with salt and chilli flakes.

You can substitute the beef with sliced chicken or grilled tofu. If preparing beforehand, cook the meat, cut the vegetables and prepare the dressing but store them in different containers. Combine the ingredients right before serving.

A mother, a homemaker and an aspiring chef. She tweets @twitter.com/Nidolicious

Spicy chicken with peanuts: A quick must have stir-fry recipe