The morning after elections: A letter to my Khan and my PTI family 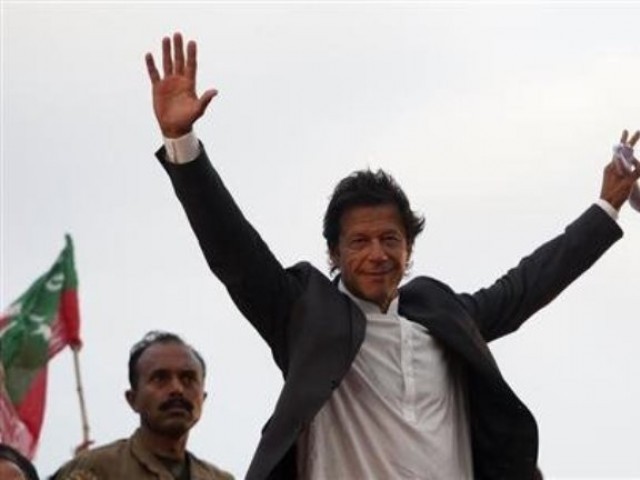 Sir, it is an honour to call you a leader. PHOTO: REUTERS

A sudden lull is seen on social media as the results trickle in. Shock. Disbelief. Disappointment. After all, we were called the “PTI trolls”. Our enthusiasm and excitement, and often confrontational attitude of taking head-on collisions with the old players of the political field irked the intelligentsia and the liberaati. A truly centrist party, we were attacked by everyone: the left and the right.

However, through it all, as a young party, we held each other’s hands and were fueled by hopes of a Tsunami.

PML-N is in a clear lead – no question about it – and we are all devastated, me and my fellow PTIians. A bit sheepish about our often naïve enthusiasm which others mistook for arrogance, I hear the youth, our strongest voters, saying:

“Nothing in this damned country will ever change.”

“Look around again; it already has. We are already living is a more awake, Naya Pakistan.”

Not knowing the ultimate result of NA 250, here’s what I saw today in the infamous constituency. Women flocked, empowered by passion, realising they had a say and a role in the politics of this country. The disabled, the elderly, the sick – everyone knew they had a role to play.

I saw people on stretchers and children on wheelchairs. They were all out to support PTI, that too when we knew we were up against namaaloom afraad.

In a city where we would, once upon a time, take the name of a certain political party in hushed whispers, yesterday we, the women and the youth, battled it out peacefully by exercising our right to vote. We sweated it out for eight hours to cast a vote in the May heat. We remained peaceful and shared water, but did not let anyone break the queue. Our youth realised they were a power and had a sense of ownership in Pakistani politics. We spoke out against hooliganism and intimidation. Hope came alive yesterday.

We have emerged as Pakistan’s second largest party, a force to reckon with. We are the biggest threat to the status quo, with no reliance on replays of our assassinated leaders or laptop give-aways or any prior serious political experience and with a leader who is neither a feudal, nor an industrialist, nor a “seasoned” politician who knows the bad game that politics is like the so-called stalwarts.

All my leader has is a dream and pure ambition, and my heart swells with pride and joy when I call him that. He dreams of an awake Pakistan – one without the status quo that he has managed to threaten; one without disparity between rich and poor. He dreams a dream of a Pakistan where expats long to come back to and the youth does not want to run away from; a dream of justice for every Pakistani: left, right and centre.

Are you kidding me, everyone?

This is a proud moment for PTI. In the face of criticism, opposition, backlash from all quarters and no billions in our accounts to support our campaign, we have become a force that cannot be ignored. We have not used violence or insidious ways to get here. At the most, we said a few irksome things on Twitter and Facebook in our over-zealousness, but used no arms or weapons to force our way through. We are not backed by dynastic political support. We did not dig out photographs of any opponents romantic escapades and use them to win popular support.

All we had was the ideology of our leader and we have stuck to it because we believe in it.

As a mature, aware PTI voter, I believe we did this is for the best: the serious PTI supporters needed this time to mature. The fickle ones will ebb away. What will remain at the other side will be a true force of change.

While a nationwide Tsunami may not be here yet, it would be unwise for gloating opponents to write that off in the future. We have done pretty well for a young party, and the change may begin from our problematic frontier where PTI’s positive impact will, no doubt, be felt. The Pakistan Tehreek-e-Insaaf has definitely arrived and is here to stay.

Above all, we may not have a Prime Minister from our party (yet) but we have a leader who is a hero who wins hearts. Additionally, Imran Khan is now head of one of Pakistan’s biggest and most original political parties.

Khan, as you continue to heal and gain strength in that hospital in Lahore, rest well so that we may get ready for the next innings. This is a great beginning. We will see it to the finish line together. InshAllah.

PS: It is a privilege and honour, Sir, to be led by you.