‘They staged it!’: From Imran Khan’s fall to the kidnapping of Ali Haider Gilani 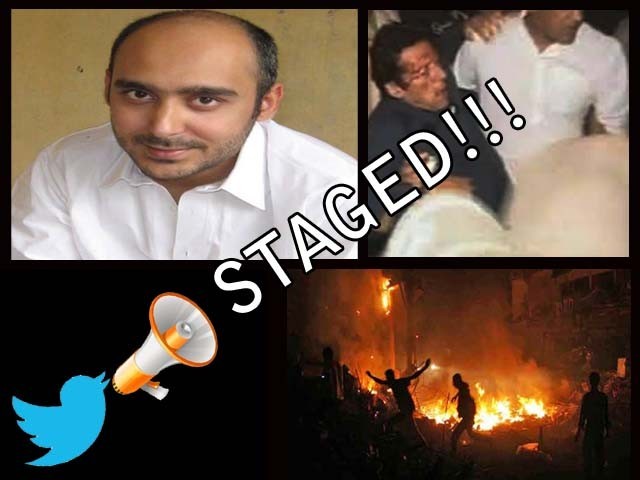 Why would these parties stage things that in no way favour them?

Imran Khan fell off a forklift. We all saw the tumble and the footage of him being rushed to the hospital; we saw the blood gushing out of his head, splattered all over his forehead.

My political affiliations aside, I was heart-in-mouth and worried for the health of the Captain.

When I got home, still distraught, I logged into Twitter to see what people were saying about the incident.

Along with thousands of prayers and sympathies with Khan, I was surprised to see many hate tweets too which went along the lines of this:

There was already a picture circulating on social media, with Imran Khan falling and a lion standing behind him saying something like “Run! The lion is here!”

I found this extremely distasteful.

After Khan’s address from the Intensive Care Unit, the attacks only got worse. People were calling for the Kaptaan’s head, alleging that this farce is only to gain some sympathy votes!

But Khan is a national hero and thankfully, the accusations were not too many (or they escaped me).

As I tweeted wishing the best to the parties, I had a lot of people replying to me, telling me

“Oh God, you’re naive. This is just another political tactic to gather sympathy votes. They are known for doing this.”

Some had even begun to presume that I am a member of one of these parties and started accusing me personally and stated that I was a paid agent – this for only expressing sympathy!

It was when I realised there was a whole troll army on Twitter from different political parties, dedicated to throwing around accusations about “staged blasts to gather sympathy votes”.

“Really?” I thought. I have seen people making jokes about Khan’s tumble and to be honest, after I found out that he was all right, even I made a joke about “falling from heaven” because he is so handsome (which earned a rather well deserved backlash from Khan supporters), but accusing parties of orchestrating horrible things, in which lives of their own members are lost is something beyond me.

The worst thing about this trend is that there is no waiting period. A blast happens, and before Tehreek-e-Taliban Pakistan (TTP) can even get to claiming responsibility, there is already an inside war on social media.

Today, former prime minister Yousuf Raza Gilani’s son Haider Ali Raza Gilani has been kidnapped from a election campaign rally of his own party, the Pakistan Peoples Party. His guard was shot dead by the armed men who abducted him. This is serious stuff. However, there are already people on social media not only saying that the attack was an inside job to boost the election campaign, but expressing their satisfaction over the incident!

Some people stated that the former prime minister deserves this fate due to his callous statement “why don’t they leave then,” referring to Pakistanis who want to leave the country due to dissatisfaction over the state of affairs.

“Now Mr Gilani will know what terrorism is like” said one of the tweets.

Read below some of the tweets that have already started calling the kidnapping a “topi drama”:

There are good and bad people in every party and this trolling is not limited to any specific party. I saw tweets of people who were shocked that their own party members were displaying such a lack of sympathy for the Gilani family. Let’s not forget that Salman Taaseer’s son has still not returned home.

Currently, almost every party is going through tough time. With Khan hospitalised, PTI is suffering; MQM, ANP and PPP are under constant threat. The former two parties have lost their workers and vote bank because of the blasts at their election offices. I personally know families who will not be voting for MQM and ANP any more because they are scared of being bombed to death at polling stations.

Why would these parties stage things that in no way favour them?

Why would Imran Khan – a rational man –  be stupid enough to put his life at risk by falling from such a height?

Why would Ali Haider Gilani risk his life by being shot at?

Will it really make a difference?

The deeper question is, what does it say of us as a nation when we are only too willing to assume the worst of people? Our first instinct is too jump up and say ‘what a lie’.

Well, my question is, what if it isn’t a lie? Do you have any sympathy towards those who are suffering right now?

Many of us are dreaming of a “naya” Pakistan – a better Pakistan; wouldn’t it be a shame if no humans lived in the Pakistan that we will have on the May 12?