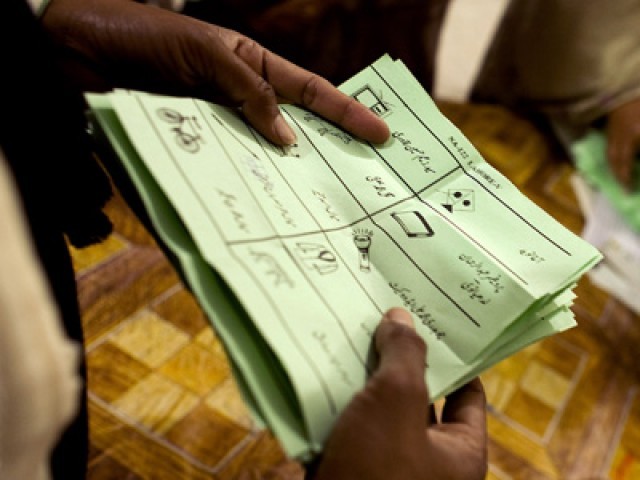 'Fill the remaining ballots and use the votes which will be otherwise wasted' the wadera ordered me. PHOTO: REUTERS

In the general elections of 2008, I was assigned the duty of managing a polling station. It was the first time that I was summoned (of course unwillingly) to conduct polling in a remote village area. I knew this job was not a piece of cake and I prepared myself for anything unexpected.

Since I did not have any strong connections, I was obliged to do the job. One day before the polling, I was called in court to collect the polling material and meet with the rest of the staff members. My court orders clearly mentioned that I had the powers of a first-class magistrate on polling day and that I could take legal action on spot in case of any mishap.

I wondered if such a thing occurred and I messed with a mighty person, who was going to protect me right after the polling when my legal powers would be revoked? I would simply be restored to the position of an ordinary university teacher, no doubt.

Aware of the potential consequences, I reminded myself of Einstein’s quote suggesting not to think about the future as it comes soon enough. I also had Murphy’s Law reverberating in my mind,

“Anything that can go wrong will go wrong”.

Soon after, we were advised to reach the polling station immediately and prepare it for the next day’s polling.

We traveled to the village where the polling had to be conducted in a school. To my surprise, when we reached the location, I found just three walls around two rooms which was supposedly our polling station. Note that it was a government school which was running in papers. It was a deserted place with plants growing everywhere and a lot of dangerous insects crawling around.

Helplessly, we asked the villagers if we were at the right place. Once confirmed that the location was correct, the next thing was to decide what we had to do now. Someone informed the wadera of the village – let’s call him Mr Abdul* who appeared soon with his body guards. He welcomed us and invited us to stay in his bungalow while his servants cleaned up the polling station. Reluctantly, with the box of the ballot papers pressed up against my chest (as if it were full of diamonds) we followed him.

Mr Abdul offered us a luxurious lunch while his servants started to clean the school. During lunch, someone told me that Mr Abdul belonged to the party which had a strong hold in that region. I could not decide whether this was good news or bad news. Anyway, I followed.

After we finished lunch, I decided to shift to the polling station and asked my staff to follow. Mr Abdul insisted that we should spend the night at his bungalow, but I declined.

The next day we woke up to discover that the polling station was filled with the villagers’ way before the polling time. The whole village had gathered there including children and women who had set up tents in the school’s courtyard and were cooking different types of meals. Many temporary shops were also setup there including a jhooley waala. Children were playing in the courtyard while women were busy cooking food, sewing clothes, and feeding the goats.

It was the perfect scene of a village fair!

Soon the polling agents started to pop up. I asked them to verify their certificates and passes from their candidates. They were totally unaware of this stuff. Some of them took a paper from their pocket. Guess what? It was an unfilled certificate. Some of them did not even have their ID cards but they were insisting to be allowed in.

I asked them to go back to their respective candidates and get the certificates filled in and the required passes. They returned within five minutes with all the required documents. It seemed like the candidates were outside (or I don’t know?).

The polling started. All the polling agents were each other’s friends and raised no objection on any vote. Instead of coming in one by one, the villagers began to emerge with their families and insisted to vote together. I tried to make them understand that this was not allowed. Only one person could cast vote at one time.

They argued that all of them had to cast vote to the same party and it did not matter whether they do it one by one or together. With the help of some of my colleagues, I succeeded to persuade them to go one by one. But I was taken aback when they started asking me what and how they should vote. I tried to tell them the procedure which, I reckon, is the simplest job in the world. I told them to pick the stamp and apply it on the symbol of their choice.

To my surprise, many of them were not able to even do this. They asked me to do it on their behalf. I did not. Some of them were even confused as to whom they should vote for and they asked me. I was pretty sure that most of them returned undone and threw the blank ballot in the box.

In the evening, when an hour was left to close the polling, Mr Abdul appeared out of nowhere. With his cheeks touching his ears, he said,

“Since many people have not come to cast vote, now it is time to fill the remaining ballots and use the votes which will be otherwise wasted.”

Pretending to understand nothing, I asked him to explain in detail. While he was talking, it occurred to me that he wanted to cast fake votes for his party and I had two options: 1) refuse and be prepared to suffer the consequences, 2) agree and be ready to face a legal action in case the news is leaked.

I took a minute to think and decided to suffer by refusing. Mr Abdul chuckled and left without saying a word. I was almost certain that he would be back with his body guards and I would find myself nodding. Luckily, nothing happened.

After the polling finished, the villagers rushed into the polling room and insisted to take part in counting. It took me quite some time to explain it to them that this was not possible. Then they asked me to finish the counting as soon as possible and announce the result. Realising the pitch of their tone, we finished the counting in a hurry and announced the result.

The job was done and my staff asked me to issue certificates to them so that they could be relieved from their duties. I did it. When we reached the court to submit the results, I found out that I had been left alone by my staff and all of them had disappeared during the bus journey to court. How I submitted the results to the returning officer, is another story.

Moral of the story: A big part of our country’s population comprises people who don’t even know whom to cast a vote for or how to do it. Quite unaware of the consequences, they don’t know what destiny they are choosing for themselves. In this situation, a change or revolution by selecting a party other than the tried-and-failed ones will be merely a miracle.