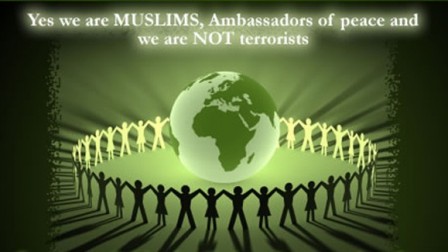 The Facebook Blasphemy scandal seems to have died down but there are still some pretenders to the yet to be abdicated throne.

The one I can think of is Millat Facebook which has tried to make inroads in our social network loving society (read: friendship please). The Millat Facebook topic has been discussed endlessly so there is no point of going into details about it.

Their website was inaccessible before the ban was lifted so I assumed that the creators of the site had given up. I was proven wrong when I woke up this afternoon to find a tweet about the resurgence of Millat Facebook.

I thought I was imagining things when I logged on to their website because I thought I had ended up at the wrong place. It seemed more like a website for a militant group ready to regroup after losing a humiliating battle. There was a big message informing their fan base about their plans to expand their capacity.

The part which made me laugh out loud was where the creators of the site were comparing statistics for their own website vs the “zionist” FB created by Mark Zuckerberg. I realised that most of the facts they had listed over there were quite inaccurate. It would be a pleasure to debunk those facts and present the real truth.

Rejoinder: That’s what happens when you steal the entire code and rewrite it. There is also a PHP script in the market which can be modified to fit your own needs. There is nothing extraordinary about those eggheads. If they were so dedicated they would create their own social network instead of stealing from one.

“Mark Zukerberg’s Zionist FB which took YEARS to develop and ran as a prototype for years. Than was registered in 1997 and it wasn’t until a YEAR LATER in 1998 that they could formally launch it.”

Rejoinder: (I love how they manage to bring Zionism in nearly every paragraph hehehe) Facebook was not a prototype for years and nor was it launched in 1998. It started off as a closed site open only to members of Harvard College and then slowly expanded to other universities and colleges in the US. It launched on the 4th of February 2004 as thefacebook.com.

Rejoinder: There is no way to rely on those figures unless an external auditing firm comes in and does that. Sorry MFB I won’t believe that till I see some hard evidence.

“FB who in the ENTIRE FIRST MONTH could manage ONLY 3,000”

Rejoinder: Ummm yeah if your membership is restricted to Harvard College then there will be a limited number of people using the service, Duh.

“The most reputable internet stats provider Alexa Ranked MFB 18,860th site out of over 6 BILLION WEBSITES within JUST One and a Half week.“

Rejoinder:  Whoopee. Good for you guys.

“The Zionist owned FB which took 6 years to gain popularity“

Rejoinder: (Ha-ha they keep reminding us that FB is some sort of Zionist Conspiracy) I think they keep forgetting the fact that Facebook opened up to the public in 2006 and the rate of its growth was phenomenal. It was an overnight success even if it took some time to get a high number of users.

More Imaginary Facts from the proud owners of Millat Facebook

Mark’s FB was growing at 10.24% 3 months ago After their Backing and support of the Caricatures and the launch of Millat FACEBOOK, this dropped to 2.32% a month ago With Millat’s rising popularity, FB’s growth further slumped to 0.5% in the last 7 Days. The result is a decline from a 10.24% growth to the level of 0.5% ONLY. This is over 95% fall in their Growth and a SERIOUS KICK. The 10% approximate lost would account to 40 MILLION of the claimed 400 Million FB users, a HIT serious enough to get FB reeling.

Rejoinder: I don’t know where they get their facts from.  It seems that they are all tuned into a delusional channel for their updates. Facebook users were upset with Facebook but it had nothing to do with the caricatures. People were actually annoyed about the privacy settings on Facebook and had threatened to quit the service if nothing was done about it. However, Facebook did somewhat resolve that (even if the privacy controls are more confusing than ever).  There has hardly been a drop in the number of Facebook users and it has been registering double digit growth. People might leave it for reasons related to privacy and not for us. In fact all those people who made a big fuss about it are still sticking around. Chalk one up for the hypocrites who are full of hot air but end up doing nothing.

Yet more gems from the Conspiracy Theorists running Millat Facebook

Rejoinder: If they were really being attacked by the CIA and Mossad how the hell do they know it’s them??? Do the CIA and Mossad have IP addresses which screams out their name? The CIA and Mossad are so dumb that they are going to use their own IP addresses. Yeah right! Do they even know how DDOS attacks are initiated?? No agency is going to do it themselves even if they want to. Why should they do it themselves when they can outsource it to some hackers on their payroll.  I doubt the CIA & Mossad would do something like that for a no good website which wants to milk it for all the publicity they can get. They have better things to do than to bring down some two bit website.

Rejoinder: LOL. This is a funny allegation coming from a website which basically stole the whole facebook concept and allows dating on its own website. Note to MFB: People have the right to their own opinions so buzz off.

Personal Threats to the Millat Administration

Rejoinder: Oh yeah I bet they are getting overseas phone calls with sinister sounding voices. They are so upset that our genius programmers have found the 8th wonder of the world and have created something special.

Partnership with Yahoo resulting in YAHOO refusing to deliver any emails containing Millat Facebook.COM (YAHOO and FB recently entered in a business deal and this explains YAHOO’s actions to help FB). Yahoo Mail is BLOCKING MFB emails ………………….. Yahoo is blocking our emails stating that “your website contain offensive content” They think uniting Muslims is offensive, this is their double standards. Pray that we succeed against these evil enemies and unite our Ummah as One Millat and show them “Yes We Can”

Rejoinder: This one doesn’t even warrant a response because it’s so preposterous. Yahoo blocks emails if they come from a website spreading hatred. If they were so against Muslims they would have banned emails from Naseeb.com or any other website. Microsoft also has an arrangement with Facebook but does that mean they also block emails from MFB. Yahoo would block the emails regardless of the agreement with Facebook. If the creators of MFB are so against the “Zionists” why don’t they create their own “Millat” email so their email notifications won’t get blocked? Furthermore I doubt the emails are blocked as MFB looks more like some sort of spam website. If I were a MFB user I would check my Yahoo spam filter to see if the email was there

This is very strange that Mark’s Facebook which allow and supports RIDICULE of Holy Prophet (SAWW) is not objectionable but Millat Facebook.com which prohibits the ridicule of any faith and offers a very decent environment is” Objectionable”

Rejoinder: I agree that Facebook has double standards as it did not take down the caricatures. However Millat Facebook was yet another breeding ground for dating and was set to be a not so decent place.

Yet more dribble from MFB (My comments in brackets)

But Alhamdulillah they have been constantly DEFEATED successfully.

(Really how is that? Please let me know)

All this has been phenomenal and miraculous. It is no ordinary feat and cannot be explained just by any traditional logics. All this is Allah’s blessings and YOUR support. So our heartily and deepest gratitude and CONGRATS goes to YOU. AND NOW THE ENEMY HAS GONE DESPERATE

(How have they gone desperate? Are they busy crying over their losses from a market which barely matters to them?)

(Of course if someone steals my design and ideas he is responsible for infringing on my intellectual property. I would ask my provider to stop providing hosting for them and revoke their domain. Duh)

(Yeah that’s one reason why so many people are still using Facebook. Why your beloved comrades such as Zaid Hamid are also using it to spread their malicious propaganda)

The icing on the cake

MFB has been hailed in the international media as a serious threat to FB as well as a positive answer thereby improving the image of Muslims and Pakistanis. They have reported Millat Facebook and overall hailed it as a brave and unique step which poses a serious threat to FB ……..and is termed a REAL alternate ………….     Despite an attempt by a Herald affiliated and foreign funded online Pakistani newspaper to crush Millat Facebook all are now amazed with the results Alhamdulillah

(LOL once again. It is obvious that they are p****d off with the Express Tribune’s take on MFB.)

All I can say is that this is the most blatant form of exploitation of a bad situation. Only some naive fool will actually believe them. I have been laughing ever since I landed on their homepage this evening. I would be really surprised if people actually believe everything they read without verifying the facts. I have condemned Facebook for their double standards but did not endorse the ban on Facebook since I believe in Self Censorship. Only time will tell if the God fearing creators of MFB (who ironically sinned by stealing) will be able to deal with the legal and financial repercussion in the future. God save us all from crazy people who are able to fool people like that.

An IT graduate from Middlesex University who has been blogging for the past 7 years. He is a big fan of tennis, house music and Bjork.

Valentine's Day is a scam!

Biased media: We are all to blame

PakLeaks: Did I miss the humour?

Conspiracy 101: So what really happened?