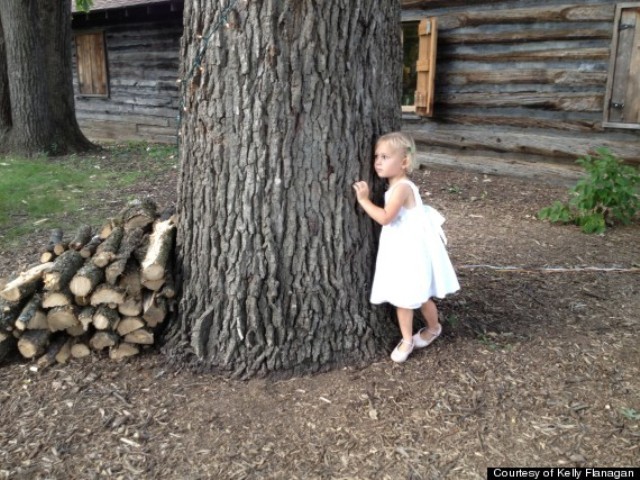 Little One, I want to tell you about the boy who doesn’t need to be kept interested, because he knows you are interesting. PHOTO: KELLY FLANAGAN

Recently, your mother and I were searching for an answer on Google. Halfway through entering the question, Google returned a list of the most popular searches in the world. Perched at the top of the list was “How to keep him interested.”

It startled me. I scanned several of the countless articles about how to be sexy and sexual, when to bring him a beer versus a sandwich, and the ways to make him feel smart and superior.

And I got angry.

Little One, it is not, has never been, and never will be your job to “keep him interested.”

Little One, your only task is to know deeply in your soul—in that unshakeable place that isn’t rattled by rejection and loss and ego—that you are worthy of interest. (If you can remember that everyone else is worthy of interest also, the battle of your life will be mostly won. But that is a letter for another day.)

If you can trust your worth in this way, you will be attractive in the most important sense of the word: you will attract a boy who is both capable of interest and who wants to spend his one life investing all of his interest in you.

Little One, I want to tell you about the boy who doesn’t need to be kept interested, because he knows you are interesting.

I don’t care if he puts his elbows on the dinner table—as long as he puts his eyes on the way your nose scrunches when you smile. And then can’t stop looking.

I don’t care if he can’t play a bit of golf with me—as long as he can play with the children you give him and revel in all the glorious and frustrating ways they are just like you.

I don’t care if he doesn’t follow his wallet—as long as he follows his heart and it always leads him back to you.

I don’t care if he is strong—as long as he gives you the space to exercise the strength that is in your heart.

I couldn’t care less how he votes—as long as he wakes up every morning and daily elects you to a place of honor in your home and a place of reverence in his heart.

I don’t care about the colour of his skin—as long as he paints the canvas of your lives with brushstrokes of patience, and sacrifice, and vulnerability, and tenderness.

In the end, Little One, if you stumble across a man like that and he and I have nothing else in common, we will have the most important thing in common:

Because in the end, Little One, the only thing you should have to do to “keep him interested” is to be you.

This post is, of course, dedicated to my daughter, my Cutie-Pie. But I also want to dedicate it beyond her.

I wrote it for my wife, who has courageously held on to her sense of worth and has always held me accountable to being that kind of “boy.”

I wrote it for every grown woman I have met inside and outside of my therapy office—the women who have never known this voice of a Daddy.

And I wrote it for the generation of boys-becoming-men who need to be reminded of what is really important—my little girl finding a loving, lifelong companion is dependent upon at least one of you figuring this out. I’m praying for you.

A licensed clinical psychologist, practicing at Alliance Clinical Associates in Wheaton, IL. He is also a writer and blogs regularly about the redemption of our personal, relational, and communal lives. Kelly is married, has three children, and enjoys learning from them how to be a kid again. He tweets @DrKellyFlanagan