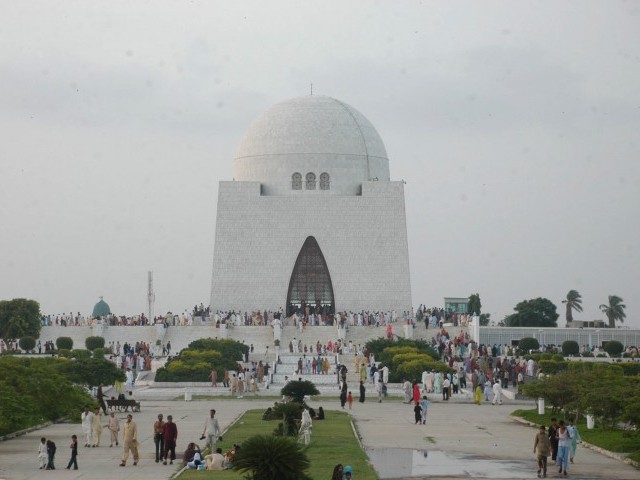 How will Karachi prosper and progress after the elections? How will large scale infrastructure projects be undertaken? PHOTO: FILE

Elections 2013 are almost upon us. One week or so to go and the political campaign in Punjab and bomb blasts (if you happen to live in Karachi) are in full swing. “Tabdeeli” (change) and “Naya Pakistan” are the buzzwords on which these elections are being contested.

In one corner we have the mighty Imran Khan who believes that his time has come and he will lead us, the masses, to pastures green which we have never seen before. On the other hand we have the Mians of Raiwand – the Sharif who claim to be the shers (lions) who saved Pakistan in its hour of need and responded to India’s five nuclear blasts by having six nuclear blasts of our own.

Some believe that Mian’s Pakistan was all set to become an Asian tiger back in the late ‘90s when general Musharraf quite crudely took power from them, a sin for which he now faces condemnation and prosecution.

Lagging somewhere behind these two political entities is our dear prince, excuse my indiscretion, our king in waiting – His Excellency, the very honourable Bilawal Bhutto Zardari of Ghari Khuda Bux, who was born for the sole purpose of ruling over us and providing us all with roti, kapra and makaan.

Daddy dearest, along with erstwhile uncles Gilani and Raja Pervez, has done such a stellar job in ensuring that democracy is the best revenge on the people that our dear Bilawal is now too afraid to be among the people which his dear grandfather Z A Bhutto was a champion at. God bless Skype and the wonders of video calling or the word of wisdoms that Bilawal utters and the mannerism which accompanies these would well and truly be lost on us.

Jokes aside, all three parties have support and should make up majority of the numbers in the next National Assembly when it is next called in to session. These three are those who will be the majority and minority in the next government which will decide the choices we as a nation make in the not so far future.

None of these parties have a major presence in Karachi and I fail to see how the issues that people of Karachi face will in anyway be resolved by the next government without any grass root support.

Karachi is a city in which the Muttahida Quami Movement (MQM) has the most support. This has been reflected in election results post 1985. The MQM has been a part of countless governments at the federal level, yet the city’s problems remain unresolved.

Both Pakistan Tehreek-e-Insaaf (PTI) and Pakistan Muslim League Nawaz (PML-N) have, during their campaigns, promised that they will address all of Karachi’s concerns and bring peace to the city. However, neither of these two political parties has undertaken any noteworthy political campaign in this city. Neither Imran Khan nor Mian Nawaz Sharif has held any political rallies in the city of the Quaid. Imran Khan was scheduled to address a public gathering on May 1 but that was cancelled on pretext of security.

With not much on-the-ground campaigning by PTI and/or PML-N in Karachi, neither of these parties stands to gain many seats in the city in the coming elections. This is despite the fact that Imran Khan is quite popular in quite a few constituencies across Karachi.

The youth in the city, especially in the well-to-do areas like DHA, PECHS, KDA, North Nazimabad, Gulshan is quite inclined to vote for the Bat but they need to be mobilised. This seems to be missing. On the ground leadership is required if the support is going to be turned in to votes on Election Day.

If this does not happen, which given the time left in the elections it probably would not, it is quite likely that the MQM will retain its mandate in Karachi and continue to be the representative of people of Karachi in the National Assembly in Islamabad and the Provincial Assembly in Sindh.

With the mainstream parties not actively contesting or campaigning in Karachi, the people of the city are, within their rights, allowed to enquire as to how the issues which concerns this mega city will be addressed by the political party which forms a government in Islamabad. Without any on-the-ground support in Karachi, the decisions taken by the government will become hard to enforce. The only logical solution would be for the MQM to become a part of the coalition government and side with the party which gains the most seats.

But will doing so solve Karachi’s problems?

Will the next government, formed by either PML-N or PTI, be able to work alongside MQM and address the issues which concern the largest city in Pakistan?

How will Karachi prosper and progress?

How will large scale infrastructure projects be undertaken?

These are some of the questions that I would like those destined to lead Pakistan in the next five years to answer prior to May 11, 2013. Karachi deserves answers.

Thank you, Pakistan: 70 years later, the good in this great country still trumps the bad

Pak vs UAE: A cornered tiger's only way forward is to attack

Chief Justice Iftikhar Chaudhry, our man of vision and courage