10 reasons why PTI has my vote 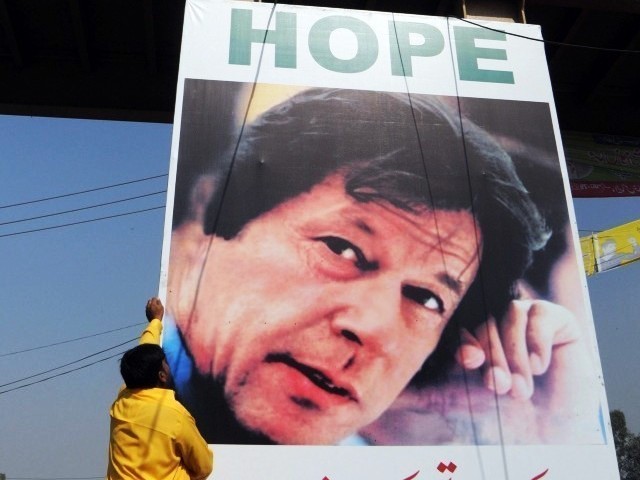 Pakistanis from all walks of life reveal a genuine fervour for voting for PTI. PHOTO: AFP/FILE

I have never voted for anything in my life, yet on May 11, 2013, I will cast my vote for the first time in the upcoming general elections of Pakistan and that too for Imran Khan’s Pakistan Tehreek-i-Insaf (PTI) political party.

In my home city of Karachi, conversations with Pakistani citizens from all walks of life, such as rickshaw and taxi drivers, store vendors, bakers, mechanics, teachers, doctors, artists, and bankers, all reveal a genuine fervour for voting for PTI.

Most of these people have even talked about plans of rounding up friends and family members on Election Day, so that they can make a festive event out of voting.

Even the ‘burger bachaas’ I know have sworn to take time out of their extremely taxing and ‘baked’ sessions of World of War Craft, to vote for PTI. As one acquaintance expressed through his ‘tutti frutti’ language skills,

“I am ready to chalo chalo with Imran, yo!”

It is true that some have been left shaken by the recent bombings at the political hotspots in the city, but it seems that for many, the acts of terrorism have actually strengthened the resolve to vote for change.

Here are 10 reasons why you should vote for PTI:

1. A chance to break a vicious pattern:

With political dynasties and military dictators taking turns at playing ‘pin the tail on the donkey’ with Pakistan, it seems that many Pakistanis abstained from voting in past elections, simply because choosing between candidates was like deciding between The Joker or Lex Luthor.

Although Imran Khan has been in politics for many years, the former cricketer’s political net run rate has been below par in previous campaigns. Now, for the first time in his career, Khan is running in with the momentum of a fast bowler on a green top pitch. Voting for him now is the best chance we have ever had to change the status quo.

2. A chance to elect someone who cares:

Imran Khan has a great record as a humanitarian, he created the ‘Shaukat Khanum Memorial Cancer Hospital & Research Centre’ in Lahore, to which he is the single largest donor. In order to construct the hospital, Khan put his pride aside, as he took on this herculean task through many challenging years of fundraising, which to an average person would have been a nightmare.

By comparison, what have our other political leaders created, aside from vast quantities of wealth stored away in foreign nations, and mismanagement of taxpayer’s money?

The Lahore Metro Bus for example, has been funded by billions of rupees, and seems like an unnecessary luxury in a city that faces a lack of health care, education, and electricity.

Is there any point in buying ketchup, when you don’t have a hotdog?

3. Pakistan needs a leader who is fearless:

We knew Imran Khan was a brave man when he faced down frighteningly fast bowlers from Australia and the West Indies in cricket, and lead from the front when he won us the World Cup in 1992. Further cementing his reputation as a bold individual was his decision to marry a woman from a Jewish background, even though he himself came from a growingly right-wing Muslim nation.

Later, during his political career, he travelled to the extremely hostile South Waziristan, to protest against drone attacks, in a move that could have ended his life. Even now, he conducts most of his political rallies without the aid of a bulletproof glass, standing in plain sight to engage his people.

This attitude contrasts sharply with other political hopefuls in Pakistan.

A recent video of Bilawal Bhutto’s speech, explaining why he is unable to return to Pakistan due to threats to his life, has gone viral on social media websites such as Facebook, and has left users unimpressed by Bilawal’s reasoning for not leading from the front.

4. We don’t want our nation’s heads to humiliate us overseas:

The horribly cringe-worthy moment left us grinding our teeth, when the president of our nation told Sarah Palin she was ‘gorgeous’, upon meeting her for the first time at a public event.

Any woman (yes, even Palin), who has made her mark in politics deserves to be recognised for her craft, rather than her looks. It was sexist, because President Zardari did not go on to pay similar compliments to Barack Obama.

Meanwhile, Imran Khan is a highly polished person who has qualifications in politics and economics from the University of Oxford, and when he speaks, he draws you in with his eloquence.

Founded in 1996, the past 17 years have been very difficult for PTI, yet the political party has mostly stuck to its principles, and avoided some of the well documented chances to take shortcuts to power. A lesser leader, who did not empathise with his people, would have surely given in to temptation.

Furthermore, if you look at Imran Khan’s cricketing career, there was never any allegation of match-fixing, yet within a few years of his retirement, the team quickly involved itself in wrongdoings. And at this moment in time, unlike other major politicians, Imran Khan has kept all his monetary resources within the country.

Although the foreign remittance helps, it is a loss for Pakistan to have so many of her skilled professionals working overseas rather than serving at home. Many of these educated citizens are making ends meet by driving taxis, yet find this hard life more acceptable than meeting the challenges of living in Pakistan.

It is a fact that most Pakistanis would love to return to their nation if things were better at home, and it seems that PTI is the only political party which realises this, often expressing a desire to create an atmosphere where international Pakistanis find their own country as an attractive option to return with their accumulated wealth.

On the other hand, former Prime Minister Yousaf Raza Gilani, when asked by CNN reporter Becky Anderson to share his thoughts on Pakistanis wanting to leave the country, responded with careless sentiments such as,

“Why don’t they just leave then”,

This left Ms Anderson, an experienced journalist, quite speechless.

It should also be noted that PTI has made it a priority to treat its overseas Pakistanis with dignity and respect, terming such citizens as ‘assets’, and providing them with more rights and resources than they currently have.

7. PTI’s democracy began from within:

PTI’s decision to conduct proper intra-party elections, regardless of the consequences, showed that, to the party, a proper democratic structure was more important than the results, as evidenced by the many disgruntled senior party members who did not make the cut.

On numerous occasions, Imran Khan has promised that once in power, his party will conduct elections in various social services in Pakistan, including the police force. By leading with example through the intra-party elections, Imran Khan has made it apparent that this will not turn out to be a hollow promise.

As its party’s manifesto reveals, PTI has designs on fighting major issues such as literacy, poverty, power, and corruption. These ambitions are realistically presented however, and not exaggerated to win favour with voters.

This level of transparency is refreshing in a country where politicians disingenuously suck up to voters like they are on the other end of a 1-900 number.

If only Pakistani politicians put as much energy into ending load shedding, as they do lying about when they will end it.

Years back, the Kashmir issue was the main subject of contention for Pakistanis, and Pakistani politicians used the emotional subject to milk as much endorsement as possible for themselves.

Since then, they have clearly found other emotional issues to manipulate, such as terrorism, inflation, and the lack of electricity, leaving the Kashmiri people mostly forgotten.

It seems that PTI is the only political party which is still serious about reaching a sensible resolution to the Kashmir dispute.

10. PTI cares about the environment:

Pakistan is a beautiful country which has the potential to become one of the greatest tourist attractions in the world. Unfortunately, our skies and lakes are becoming polluted, our wildlife isn’t safe, and very recently, thanks to the timber mafia and former prime minister Raja Pervez Ashraf, a key forest in the Gilgit-Baltistan region lost what protection it had.

Ignoring a policy established since the early 90s designed to protect the forest and its surrounding environment, Ashraf signed away timber worth Rs8 billion, conveniently enough, 24 hours before the end of his government’s term. This was to the horror of the community in that region, who termed it a conspiracy, and stated that the timber mafia had suddenly begun the deforestation process before ‘issuance of the notification’ from up top.

In light of such events, it is reassuring to see that not only does PTI have a detailed environmental policy, but that Imran Khan truly cares about Mother Nature,

“Just like we might have to announce an education emergency because the state of our public education, we will also have to take severe measures to save the environment.”

I am glad that Imran is giving significance to every aspect of Pakistan, including her land.