What the Islamabad police did to me and my friend … 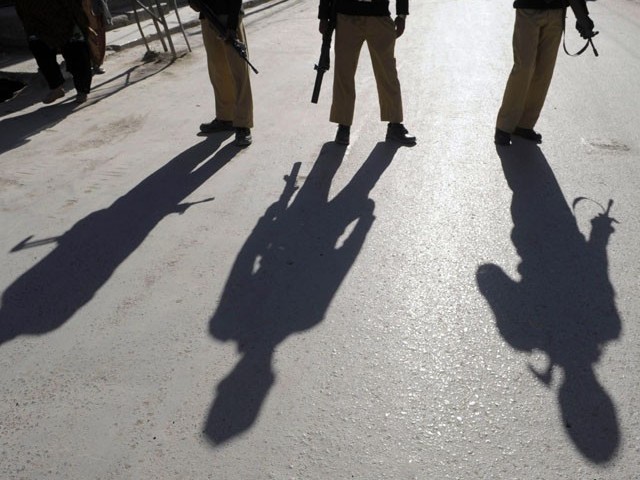 We live in a country full of such beasts and I don't blame the entire police force, just the few animalistic individuals. PHOTO: AFP

I am not a regular blogger and I don’t usually write. This is the first time that I’m using this platform to get my point across and I hope it works. My message is for a wider audience, for it to be helpful to many citizens, especially naïve teenagers.

Last Friday at around 10pm, I was standing with one of my female friends on Margalla Road in sector F-6. We were munching on crisps while standing and chatting when out of nowhere an Islamabad Police patrol vehicle stopped by.

Three police guys, two from the Elite Force in their skin tight black tees and one cop from Islamabad Police stepped out of a Toyota Vigo.

Before I knew it, one of them pushed me inside my car and conveniently planted himself on the passenger seat next to mine, while, the other guy pushed my female friend in the back seat and stood outside the car.

I was in a state of panic and could not comprehend as to what was happening around me.

The guy who sat next to me asked me to drive to the Kohsar Police Station, where he said they would lock us up. According to them, I had committed an immoral crime by standing next to a girl in a dark place.

A few minutes later, I was about to start my car when he turned his face towards mine and said that he would let me free if I gave him Rs20,000 in cash. I remained silent and before I knew it he snatched my wallet.

I only had Rs 2,000 in cash which he quickly put away in his pocket and after doing so he said shamelessly,

Now this is where the scary bit starts…

The other Elite Force guy opened the back door of the still car and grabbed my friend’s arm and pushed her into his vehicle. The guy sitting with me held me tight and did not let me leave the car while his colleague physically abused my friend’s upper body.

My friend was traumatised. She started howling and begged me to drop her home. She asked me not to say anything to anyone or the police guys would become our enemies.

Anyway, I dropped the girl home in a state that I don’t want to describe here.

After that I spun my car towards the Kohsar Police Station in F-7.

I poured my heart out to the policemen I could get a hold of and they said that they would investigate further. I stormed out. I wasn’t satisfied with the response so I drove around F-6 and F-7 in an attempt to find them myself.

I found a police vehicle parked on the corner of Kohsar Market, it was about 11pm then. It was them. I drove back to Kohsar Police Station and told the other policemen to call that patrol vehicle back to the police station immediately.

ASI Tanvir and ASP Rizwan Gondal, who I must mention are angels- calmed me down and asked all the patrol vehicles in the area to return to the police station.

Soon after, they arrived and I was asked to point towards the offenders. They promised me that they would take severe action against them, and so I did.

To cut the story short, they were identified and dismissed. Their weapons were suspended and an inquiry was initiated. They begged me to forgive them and then they called my friend and apologised to her as well.

All of this happened because I decided to stand up. I stood up, I did not drive back home and remain a coward, I fought for my right and through the help of honest policemen, I got it!

Now- all I want to say here is that there are these people who use their uniform and target teenagers and blackmail them to satisfy their lust and fill their pockets. They’re moving about freely all over Islamabad.

If they do this to you, make sure you know what to do. Immediately ask them to drive you to the nearest police station as they cannot lock you up over such a thing. That said, I don’t want to press any charges against them, nor do I want any legal action. I just don’t want another girl to go through such a horrific ordeal. My friend is in such a state right now that I cannot explain.

The names  of the police officials are:

Islamabad Police guy who took money from me: Pervaiz Tanoli

Elite Force official who had his hands on the girl: Umar Khan

Be safe! The next car they may stop might be yours. We live in a country full of such beasts and I don’t blame the police, I just blame those individuals.

A 24-year-old who is from a military family and works as a Financial Consultant in an Islamabad based Chartered Accountancy firm. He tweets @Arsalan_Tweet