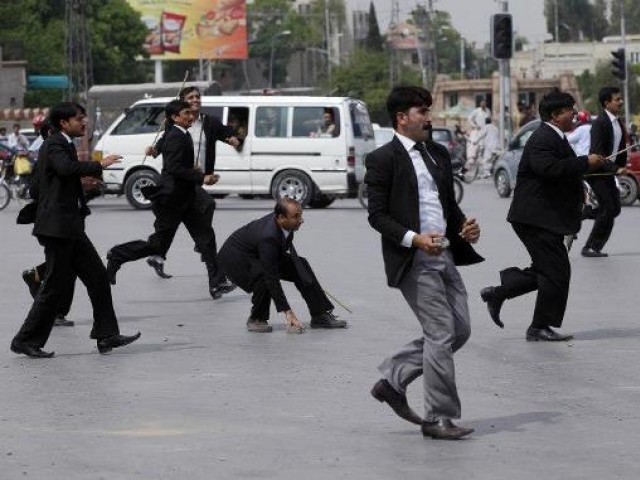 The lawyers have a problem and it won’t go away if it isn’t acknowledged. It is about time leaders of this community realise that their own reputation is what has suffered most at their battle-hardened hands. PHOTO: REUTERS

The black coats have been Musharraf’s most potent opponents since his return, just as they were during his time in office. And while it is admirable that they have taken the initiative when others seemed somewhat hesitant, the ugly scenes witnessed in Rawalpindi on Tuesday would suggest that they have gone a step, or several, too far.

Musharraf’s supporters had reportedly turned up in large numbers as he appeared before a court in connection with the Benazir Bhutto murder case. Lawyers were also present, although they claim not in the same numbers. After some sloganeering, a melee broke out between the two groups and while the lawyers were at first outnumbered, reinforcements soon arrived and carried them to an (in)glorious victory.

The savagery didn’t stop there, however. Not satisfied with beating the living daylights out of their “opponents”, lawyers, sticks in hand, took to beating passers-by and started breaking the windows of any vehicles they could find. Initial reports suggest vehicles did not shout pro-Musharraf slogans.

Although the healthy participation by female lawyers is one positive aspect the legal community could point to, there are not many others. The fact that members of a revered and educated segmented of society, specialising incidentally in “law”, would take the law into their hands and act as petty thugs in such a blatant fashion must be worrying for everyone not only in the community but in the country.

It’s even more worrying that this was not a one off incident. Since Musharraf’s return, the lawyers have only grown more violent with each passing day. First a shoe was thrown by a lawyer at the former general. The next time it was a chair. Next, a couple of his supporters were singled out for punishment, landing one in hospital.

Yet the most worrying aspect in all of this is the indifference of the leaders of the legal community. Appearing on a TV talk show the evening of the incident, prominent leaders of the lawyers’ movement, including Ali Ahmed Kurd and Taufiq Asif, president of the Rawalpindi High Court Bar Association, did not appear too keen to confront the issue of continued use of violence by lawyers.

Taufiq Asif especially stressed on the non-culpability of lawyers because they had been provoked and attacked by Musharraf supporters. Hence what they did was only in retaliation.

Now the “they started it” argument here is out of place for a number of reasons: first, because it is being made by the president of a High Court Bar Association; second, because two wrongs make a wrong; third, because if everyone was to follow the example set by the lawyers, which is to settle their scores on their own and circumvent the legal process, lawyers would become extinct.

Moreover, it deflects from the fact that since the Lawyers movement re-seated Chief Justice Iftikhar Muhammad Chaudhry, the community has become a pressure group not to be messed with, rather than the educated, righteous role models to be emulated.

Lawyers have been in the headlines for all the wrong reasons since the movement ended. They have beaten police officers, they have attacked judges, they have assaulted media persons and much of it has been caught on tape. Their response to getting filmed while beating someone has been to beat the people who filmed them. This is not exactly encouraging.

All the while the leaders of the legal community have done nothing. This is perhaps the most well organised community in the country, with Bar Associations for districts and provinces and at the national level. Yet they take no action against the “black sheep” who physically assault people and suspend memberships of lawyers for representing certain clients.

This is to say, between beating people and representing people, the latter is deemed more reprehensible by the Bar Associations.

The lawyers have a problem and it won’t go away if it isn’t acknowledged. It is about time leaders of this community realise that their own reputation is what has suffered most at their battle-hardened hands.

The various Bar Associations need to take meaningful action against the culprits in Tuesday’s fracas, most of whom are easily identifiable via video evidence. If they don’t, they will only be hastening the fall of the whole community from the status of heroes to the status of hoodlums.