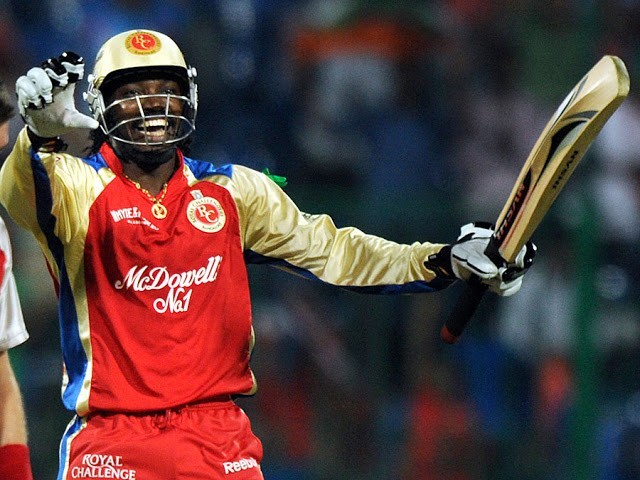 He has shown that when needed he can be patient though he prefers to be aggressive. PHOTO: AFP

When Chris Gayle walks out to the centre, you can expect to see a trail of destruction with bowlers trying to hide and captains holding their heads not knowing what to do.

And this is exactly what we witnessed yesterday when Gayle clobbered a 30 ball ton, becoming the fastest man ever to a century in T20 history! A century in just 30 deliveries. AFP

Gayle reminds me of another West Indian who could similarly lay waste the opposition, Sir Viv Richards.

He has absolutely no respect for the bowlers and that was on full display today as he thumped 17 hits over the ropes with overs disappearing for 28 or 29 runs apiece.

RCB's Virat Kohli and Chris Gayle after the match. (Reuters)

A number of records were left by the wayside during this assault including the highest individual score, the most sixes by an individual and team and the highest team score in the format. Given Pune Warriors do not have the best of the bowling attacks but to accomplish what Gayle did was no mean feat.

He has taken the shortest format of the game like bees do towards honey. He was the first one to score an international 100 in T20 during the first World T20 in 2007 and since then he has notched up 11 scores of over a 100 at a strike rate of over 150 (among all T20 matches) destroying many reputations along the way.

With his methods, it may seem that he would not be a successful Test batsman where technique is considered to be be-all and end-all but with two triple 100s to his name, one in Galle against perhaps the greatest spinner of all time, Gayle has done well in that arena as well.

He has shown that when needed he can be patient though he prefers to be aggressive. Chris Gayle signals the end of another batsman on a night on which he singlehandedly blew away Pune Warriors in Bangalore. BCCI

Due to the differences with the West Indian Cricket Board, we have not seen Gayle as much as would like to in the international arena but he did return with a band last year and helped West Indies win the World T20 title.

In this time and era, the word great has been used too frequently as a descriptor for sportsmen and has almost lost all meaning and hence I will not use it to describe Gayle.

That said, in T20 cricket there might not be a better batsman out there currently – he is a trail blazer showing the way that others would do well to follow!